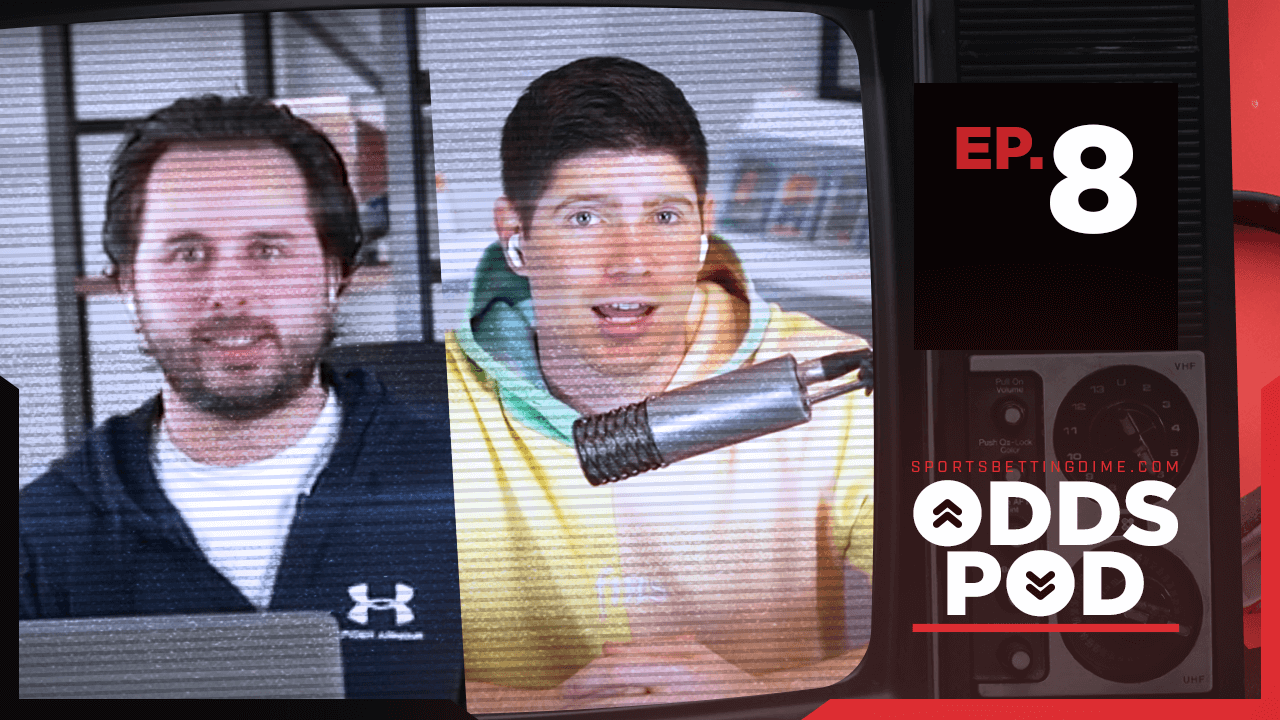 Frank Michael Smith and Matt McEwan, the Editor-in-Chief of SBD, kick off Episode 8 of the SBD Odds Pod, brought to you by SportsBettingDime.com, by recapping the ugliness that was Super Bowl 55 and their rough day at the sportsbooks.

While discussing the Super Bowl 55 props they bet, Frank brings up the streaker who apparently won $375K by betting on a streaker. Matt quickly explains that the reports are fake. He discloses that no sportsbook would take a wager anywhere near that big on this type of prop, and they wouldn’t pay it out once they found out he was the streaker.

The two then dive into the opening Super Bowl 56 odds, where the Kansas City Chiefs are listed as the heavy favorites, seeing odds anywhere from +500 to +550. Using SportsBettingDime.com’s Super Bowl Odds Tracker, Matt notes that Kansas City’s Super Bowl odds this past season were never available at a price shorter than +500 after the season kicked off.

Matt highlights the Indianapolis Colts at 29-1 odds as presenting great early value. He discusses that while Philip Rivers was a step up from Jacoby Brissett, Rivers’ inability to move in the pocket did cost the Colts some games this past season. While Matt acknowledges that Indianapolis is not getting Deshaun Watson, or Russell Wilson, he does believe their 2021 quarterback is not currently on the roster.

Whether it’s Carson Wentz, Sam Darnold, or a different free agent quarterback, Matt believes the Colts defense and offensive line put them in a great position to contend, and getting slightly better than adequate quarterback play will have Indianapolis in the hunt.

Frank points to a different AFC team as his value pick, siding with the Buffalo Bills, who lost to the Chiefs in the AFC Championship. Frank believes that Josh Allen and Stefon Diggs will only build on their chemistry in Year 2, and sees them as a very dangerous team who was only a couple plays away from playing in Super Bowl 55. At +1200 odds, Frank is buying the Bills early.

Matt looks to the Bills as his team to avoid at this price, however. SBD’s Editor-in-Chief notes that they went 4-0 against the Patriots and Dolphins in 2020, and doesn’t believe they’ll be able to repeat that in 2021. Though Matt sees the Bills as legitimate contenders, he believes that after New England or Miami make some moves (or takes a game from them in the regular season) that we’ll be able to get Buffalo at a better price than what they’re currently offered at.

Frank and Matt then quickly discuss some lottery tickets in the Super Bowl futures, which they define as any team with odds longer than 50-1. Frank points to the Eagles as presenting value after they’ve gotten Doug Pederson out of town, and appear to be ready to pull the trigger on trading Carson Wentz as well. Matt also takes a team from the NFC East, but he is siding with the Washington Football Team. Matt believes they have the assets to pull off a trade for Deshaun Watson, but even if they stick with Taylor Heinicke, Kyle Allen, or Alex Smith, he doesn’t have any faith in the rest of the NFC East.

To hear the full conversation, tune into the SBD Odds Pod above.