This page tracked the 2023 college football championship odds, which was ultimately captured by the Georgia Bulldogs for the second straight season.

The graphs below show how the odds moved over the course of the 2022-23 NCAAF season. 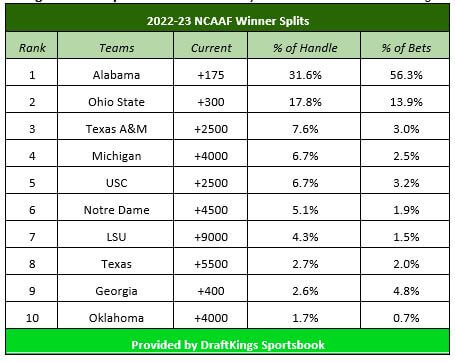 2023 National Championship betting splits as of July 20, 2022, as DraftKings Sportsbook.

The early public-betting splits for the 2023 College Football Playoff show Alabama and Ohio State getting nearly half the money between them. Alabama is first at 31.6% of the national championship betting handle, while Ohio State is at 17.8%. No other team has gotten more than 7.6% (Texas A&M). Reigning champion Georgia is down at 2.6% of the betting handle at DraftKings Sportsbook. Check out these Ohio sports betting promos to get the best sign-up offers for all your CF betting this season.