The 2022 college football season is officially underway, with Conference Championships (Week 14) taking place Friday and Saturday. By looking at the splits of money and ticket percentages on the week’s biggest games, you can get a sense of where the public is betting each week. Whether you decide to back the public or fade them is your choice, and we’ll be providing the trends for each game and the money splits on each at DraftKings Sportsbook. 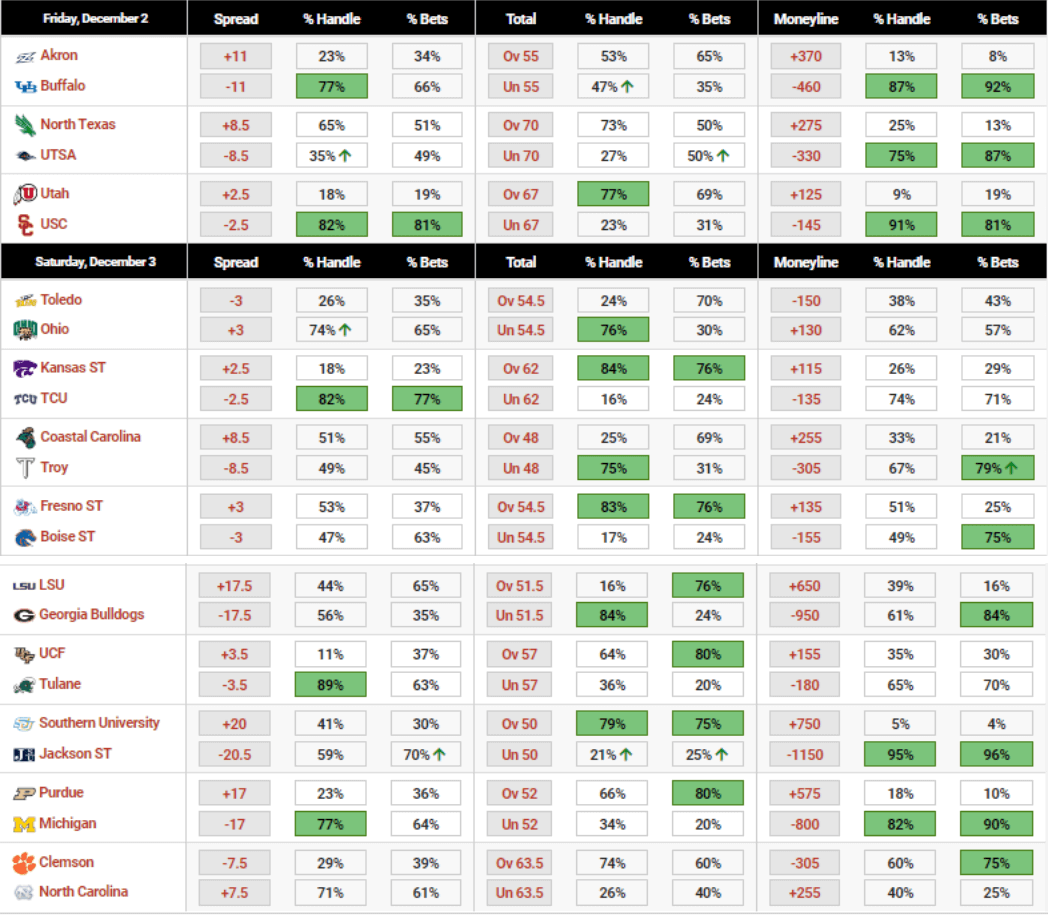 All odds and data from DraftKings Sportsbook on December 2nd.

Here’s what we’re seeing from the early money bet on Week 14 of the 2022 college football season:

What are Consensus Picks and College Football Betting Trends?

Every bet placed on a college football game is tracked and entered into a system at your sportsbook of choice. Using all those transactions, bettors, analysts and fans alike can track trends based off the total number of bets placed and total amount of money bet on any game across the spread, moneyline or over/under total markets.

With that data, you can see the public consensus (as well as where the sharp money is) for every game before placing your bet.

Money percentages – or percent of the handle – refers to the total amount of money wagered on an event, often broken down by bet type.

The money percentage pools all the money wagered on any game together, first sorting it by the type of bet (moneyline, spread, or total points scored), and then breaks down what percentage of the handle is bet on each side.

Whichever side the handle is weighted to can signal the sharp action (if the amount of tickets on that side are low), or if that side is being heavily bet by the public (if the ticket percentage is high).

Bet percentages, meanwhile, are frequently referred to as “% of tickets” or “% of bets”. Tickets are just a term used for all the bets placed.

To get the bet percentage, you look at all the bets placed (regardless of the amount of money risked on each one), again, sorting first by the type of bet, and then look at the percentage of tickets on each side of the game.

This can help identify which side both high-stakes and low-stakes players are trending towards.

As broken down above, ticket percentage does not consider the amount risked on each ticket – it just counts each bet placed. If we compare the bet percentage and money percentage of the same team (for the same bet type), you’ll know something is up if they are not relatively similar.

While that’s not a 100% accurate formula to determine the sharp action, it can give you a general idea of where the money is.

What is public betting on college football?

Public betting refers to the amount of money (and number of wagers) the public has placed on each team (and each game total) for the upcoming week. If the public is heavily backing e.g. the home or road team against the spread, it indicates that the public and the oddsmakers disagree on what the spread should be.

What percentage of college football teams cover the spread?

As with ATS betting in any two-team sport, 50% of teams cover and 50% of teams lose ATS (excluding pushes, that is, where the difference in the final score is equal to the spread; last season, only 13 games ended in a push).

How often does the favorite cover the spread in NCAAF?

Who is the public betting on college football?

The short answer is that the public loves favorites and big names. Teams like Alabama, Ohio State, Georgia, and Clemson tend to get a disproportionate amount of both wagers and handle, even as massive double-digit favorites.