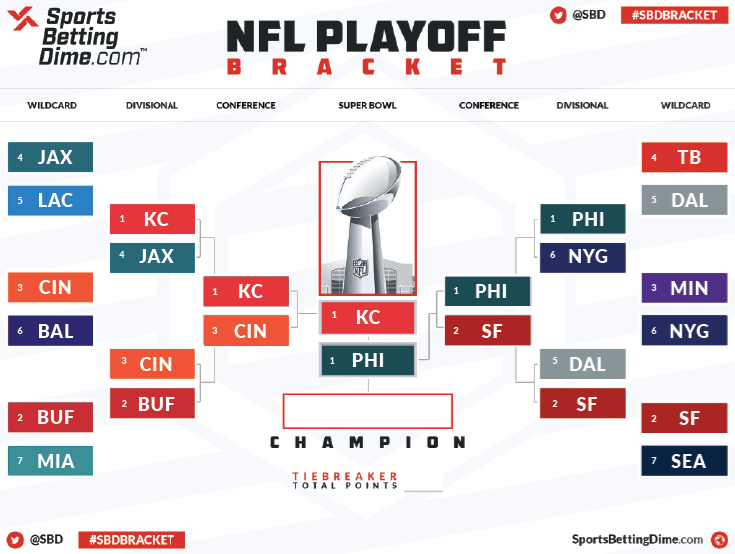 The 2022-23 NFL regular season came to an end after Week 18 on Sunday, January 8th, 2023. The NFL playoffs will start January 14 with two games and Wildcard Weekend ran through January 16. The Conference Championships will take place on Sunday, January 29. The Super Bowl will be played Sunday, February 12, 2023.

You’ll find much more NFL playoff information on this page. The only thing we don’t have here is Super Bowl odds for the Chiefs vs Eagles matchup. You can jump to a specific section using the links below:

The top seven teams from the AFC made the playoffs. The 2022-23 NFL playoff picture shows a few new teams entering the fold in the AFC. The Jacksonville Jaguars, Baltimore Ravens, Los Angeles Chargers, and Miami Dolphins are all teams who have punched their ticket after missing last season.

The Chiefs, Bills, and Bengals are the only three teams to get into the playoffs in the AFC who also made it last season.

The top seven seeds in the NFC made the playoffs. The NFC has four of the seven teams from last year’s playoffs back in this year: the Philadelphia Eagles, Dallas Cowboys, Tampa Bay Buccaneers, and San Francisco 49ers. The Minnesota Vikings, Seattle Seahawks, and New York Giants are the new faces to get in.

The NFC Championship turned out to be a very lopsided game with the Eagles beating the 49ers 31-7. Sadly, we were robbed of what could have been a great game when Brock Purdy was injured on San Francisco’s first drive and then backup Josh Johnson was knocked out of the game very early in the third quarter.

The AFC Championship provided much more excitement, as the Bengals and Chiefs treated us to another thriller in their budding rivalry. In spite of Patrick Mahomes playing through a sprained ankle, Kansas City won 23-20 on a last second field goal.

This means we will see the Kansas City Chiefs take on the Philadelphia Eagles in Super Bowl 57 on Sunday, February 12, with kickoff set for 6:30pm ET. FOX will be broadcasting the game.

Teams Who Have Clinched a Playoff Spot

The order the teams are listed in above is not indicative of their playoff seeding, rather the order they clinched playoff berths in.

The Philadelphia Eagles became the first team to clinch a playoff berth in the 2022 NFL season. The Eagles’ win over the Giants in Week 14 moved their record to 12-1, officially clinching them a trip to the postseason.

The second team to clinch a playoff spot was also from the NFC, as the San Francisco 49ers clinched the NFC West title with a win over the Seahawks on Thursday Night Football of Week 15. The Niners did become the first team to clinch their division title, though. Philadelphia clinched a playoff spot but not the division in Week 14.

The Vikings became the second team to clinch their division title, as they wrapped up the NFC North with the largest comeback in the NFL history over the Colts in Week 15.

The Bills became the first team in the AFC to clinch a playoff berth after their Week 15 win over the Dolphins on Saturday. The Chiefs joined them after their win over the Texans on Sunday of Week 15.

Heading into Week 18, there are still three playoff spots up for grabs. Both the Jaguars and Titans controlled their fate, with the two playing each other for the AFC South title. Looking at the two remaining wild card spots, the Packers and Patriots are the teams in control. Green Bay and New England get in with a win.

Everyone else still alive – Detroit Lions, Seattle Seahawks, Miami Dolphins, and Pittsburgh Steelers – need some help in the final week of the regular season.

The Texans and Bears are the first two teams eliminated from playoff contention. Both teams were mathematically eliminated after Week 13 losses.

The Broncos joined them after their Week 14 loss to the Chiefs. Denver being on this list at all, let alone this early in the season, is quite a surprise based off the offseason hype they were receiving after adding Russell Wilson.

How Many Teams Make the NFL Playoffs?

Starting in the 2020 NFL season (2021 NFL Playoffs), seven teams from each conference get into the NFL playoffs. This makes a total of 14 teams in the playoffs.

Prior to this, only six teams from each conference made the playoffs, and 12 total. The format change starting in the 2020-21 NFL season was made to add two more teams to the postseason, one in each conference.

How Many Teams Get a First-Round Bye in the NFL Playoffs?

The change to the NFL playoff format ahead of the 2020-21 NFL season also saw an adjustment to the number of teams who get a first-round bye. With seven teams from each conference making the playoffs, only one team—the top seed—from each conference gets a bye through the wildcard round.

How Do the NFL Playoffs Work?

As mentioned above, seven teams from each conference (the AFC and NFC) make the NFL playoffs. Each team who makes the playoffs is seeded from 1-7 in their respective conference. The two conferences do not mix or meet until the Super Bowl.

The NFL playoffs begin with the Wildcard Round. The top seed in each conference gets a bye through this round, leaving three games to be played in each conference. The matchups are as follows: 7-seed vs 2-seed, 6-seed vs 3-seed, and 5-seed vs 4-seed.

The NFL playoffs are not a traditional bracket, where teams move through to a fixed spot. The second round of the NFL playoffs is called the Divisional Round. The 1-seed in each conference, who was given a bye through the Wildcard Round, will get matched up with the worst remaining team in their respective conference. If the 7-seed were to upset the 2-seed, they would have to play the 1-seed in the Divisional Round. After setting the best-vs-worst matchup, the remaining two teams in each conference (second-best and second-worst seeds remaining) will battle it out in the other Divisional Round matchup.

After the Divisional Round comes the Conference Championships, where there are only two teams remaining in each conference. These two teams will play for the right to go to the Super Bowl and play the conference champion from the other side.