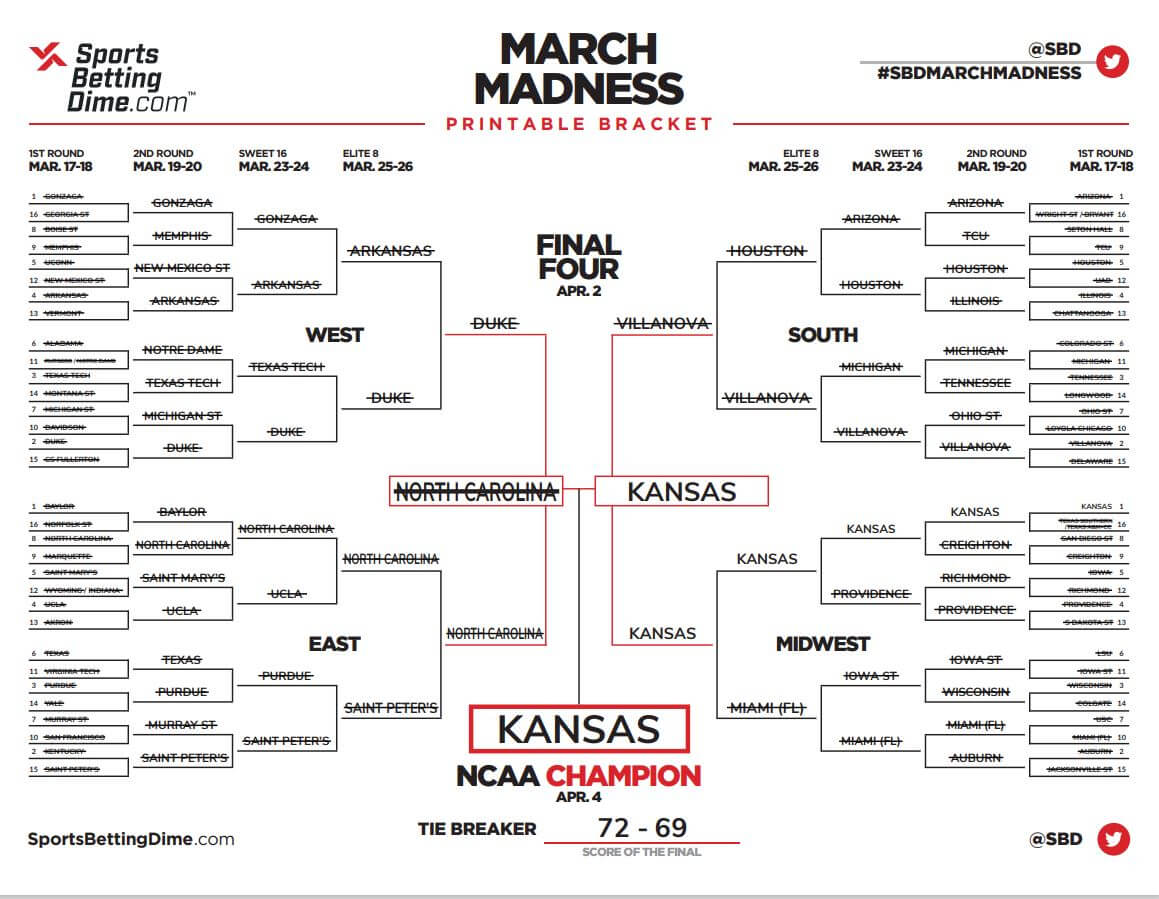 First Four complete, the 64-team field for the 2022 NCAA Tournament has been finalized. #11 Notre Dame, #12 Indiana, #16 Texas Southern, and #16 Wright State move into the last four empty slots in the bracket.

This page will display the March Madness bracket updated throughout March Madness as teams are eliminated. Click on the image above to expand and/or download the latest version.

When Does March Madness Start?

The 2022 NCAA Tournament officially starts on Tuesday, March 15, with two First Four games in Dayton, Ohio. The First Round, also known as the Round of 64, commences that Thursday (March 17).

The tournament wraps up with the Final Four and National Championship Game at Caesars Superdome in New Orleans, LA. (Note that FInal Four odds are available all season long.)

When Do March Madness Brackets Come Out?

The official 2022 March Madness bracket will be released on March 13, also known as Selection Sunday. The selection show will begin at 6:00 pm ET and will air on CBS as usual.

Selection Sunday is 1 month away pic.twitter.com/R4Nm1MC9RL

When Do March Madness Brackets Lock?

This depends on the bracket contest you are entering. Most March Madness bracket pools allow brackets to be submitted and/or changed up to the minute before tip-off of the first game in the Round of 64. That’s because very few bracket contests actually factor in the results of the First Four, which are technically part of the tournament, nonetheless.

How Many Teams Are in March Madness?

Currently, the official answer to this question is 68 teams. The 32 teams that win their conference tournaments garner automatic berths into the field, and the March Madness Selection Committee chooses the other 36 at-large teams based on regular-season resumes. (Track the college basketball conference odds here.)

The number of teams in the NCAA Tournament has fluctuated over the years. Starting in 1985, the tournament increased from 32 teams to 64 teams. Then, in 2011, it was expanded to 68 with the introduction of the First Four.

This was largely a response to perennial outcries from the last few teams not to make the field. (Surprise! There are still equally loud outcries from teams that don’t make the field of 68.) For a time, the First Four was called the “First Round” but that caused too much confusion given that the Round of 64 had been the First Round for several decades.