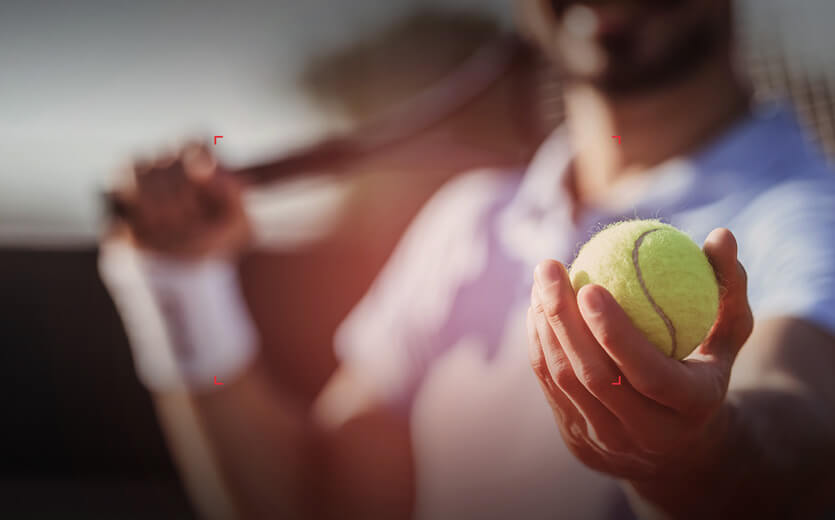 The biggest tennis upsets have huge ramifications for sports bettors.

However, major upsets at Grand Slams are rather difficult to predict. Over the past two decades, tennis fans have witnessed unprecedented dominance on the court.

Sports bettors who correctly predict when a tournament favorite crashes out early or spot a longshot who wins it all receive massive payouts for betting on the underdog who prevailed.

With that in mind, let’s look at some of the biggest tennis upsets and unlikely Grand Slam champions in recent history.

It’s never pretty when a tournament favorite goes down in the early rounds of a Grand Slam, but it does happen. Bettors lucky enough to correctly predict a major upset cash in big time.

On the flip side, the following early-round upsets should serve as a warning to anyone trying to “buy money” on extra short favorites.

Denis Istomin, who was ranked 117th in the world at the time, received a wildcard entry to the 2017 Australian Open. His second-round opponent? Defending champion Novak Djokovic, winner of five of the last six Australian Open titles.

Istomin fell down two sets to one before coming back to win in five sets. Djokovic conceded his earliest Australian Open loss since his first-round exit in 2006 when he was just 19 years old. Istomin became the first player ranked outside of the top 100 to defeat Djokovic in a Grand Slam tournament.

Sergiy Stakhovsky secured his first career top-10 win by defeating defending champion Roger Federer at Wimbledon in 2013. Stakhovsky’s second-round triumph denied Federer a chance at a record-eighth Wimbledon title, a feat he would go on to accomplish in 2017.

The narrow four-set victory featured three tiebreakers and ended Federer’s impressive run of reaching at least the quarterfinals in 36 consecutive Grand Slams. It was the Swiss Maestro’s earliest Grand Slam defeat since the 2003 French Open, ten years prior.

Stakhovsky was ranked 116th at the time, while Federer was world number three and had a +500 odds of winning the tournament outright. Famously, Federer’s loss cost one unlucky (or silly) bettor 100,000 Euros at William Hill sportsbook. That’s an enormous risk to win just 1,000 Euros!

By the time Federer lost in the second round, Wimbledon 2013 had already seen a totally unexpected early-round upset. Steve Darcis became the first player ever to defeat Rafael Nadal in the first round of a major tournament.

Darcis was ranked 130 places lower than Nadal, who was the tournament’s fifth seed. At the time, the Belgian was the lowest-ranked player to beat Nadal at a Grand Slam. Sportsbooks gave Nadal (-50,000) odds to win – an implied probability of 99.80 percent!

Virginie Razzano accomplished a unique feat at the 2012 French Open. Ranked 111th at the time, Razzano remains the only player to knock out Serena Williams in the first round of a major tournament. 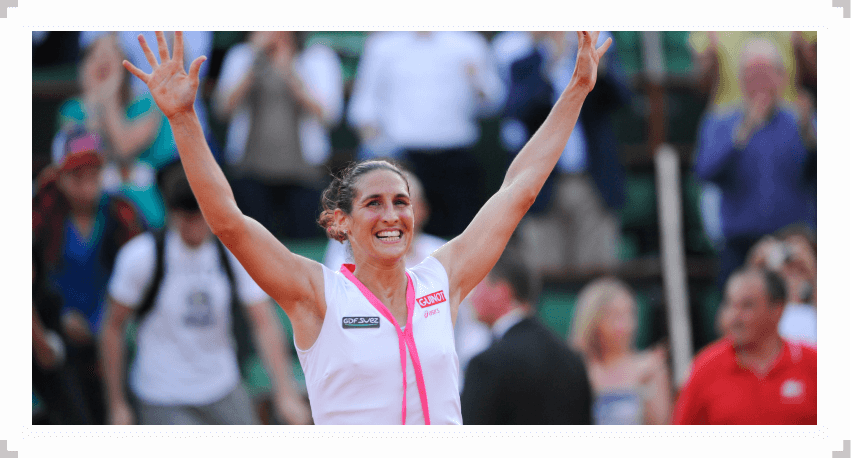 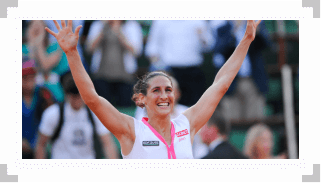 Williams previously played in 46 Grand Slams and never lost in the first round. She was the betting favorite with +250 odds of winning the French Open title when Razzano shocked the tennis world with a 4-6, 7-6, 6-3 victory. Given Razzano’s long odds to win, this was one of the biggest tennis upsets ever to occur in the first round of a Grand Slam.

Biggest Tennis Upsets in Later Stages of a Grand Slam

Tournament favorites losing in the later stages of a Grand Slam is less shocking than when they crash out in the early rounds – only one player can win the title, after all. Nevertheless, two upsets, in particular, stand out, perhaps because of the historical significance for the losing players.

In 2015, Serena Williams was world number one and well on her way to a calendar-year Grand Slam, a rare tennis feat not accomplished since Steffi Graf won all four major titles in 1988.

Williams won the 2015 Australian Open, French Open, and Wimbledon and stormed through to the US Open semifinals with relative ease. Meanwhile, her next opponent, Roberta Vinci, became the oldest first-time women’s Grand Slam semifinalist in the Open Era.

Williams beat Vinci convincingly when the two met a month prior at the Rogers Cup in Toronto and had not dropped a set to the Italian in their previous four head-to-heads. Up 2-0 in the third set, she had the finals in sight when Vinci rallied back for the win.

Ranked 43rd at the time, Vinci converted on four of ten break points throughout the match to end Williams’ attempt at the calendar-year Grand Slam. Tennis fans around the world were just as stunned as the pro-Williams crowd in New York. Vinci’s victory will surely go down as one of the most significant upsets in tennis history.

Rafael Nadal has without a doubt earned his nickname as “The King of Clay.” The Spaniard’s career accomplishments at the French Open, in particular, may never be repeated.

Nadal’s first loss at the French Open came at the hands of Robin Soderling in 2009. Nadal was riding a 31-match win streak as the four-time defending champion dating back to his 2005 debut at Roland Garros. Nadal was world number one and had -300 pre-tournament odds to win the title. However, Soderling took him down in four sets (6-2, 6-7, 6-4, 7-6) in the fourth round, shocking tennis fans worldwide. 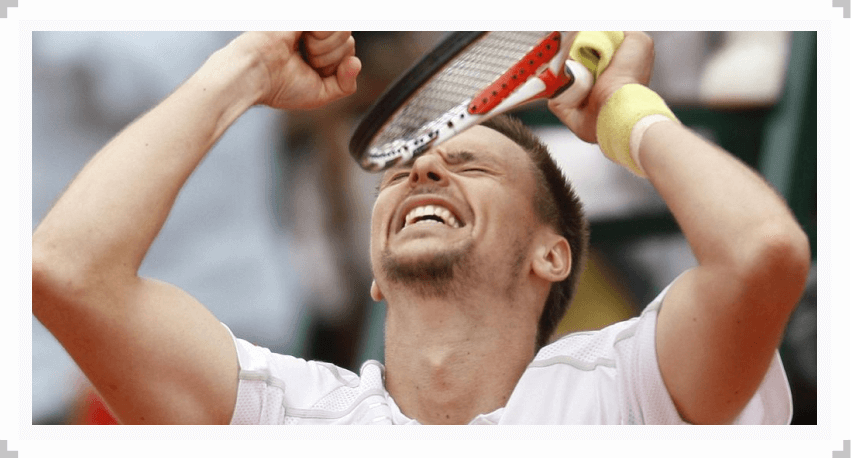 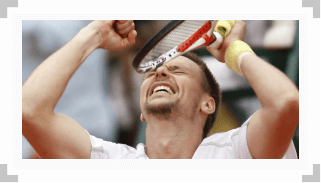 Soderling’s victory is considered one of the biggest tennis upsets in the history of the sport. Ranked 29th at the time and seeded 23rd, he won his next two matches to reach his first Grand Slam final. Despite losing to Roger Federer, Soderling’s ATP ranking jumped to 12th following the tournament.

The only other player to beat Nadal at the French? Novak Djokovic in 2015.

Tennis fans who engage in futures betting, also known as wagering on tournament outrights, should be inspired by these unlikely champions. Take note of the profit on a $10 bet.

Juan Martin del Potro went on an incredible run at the 2009 US Open to win his first and only Grand Slam title. 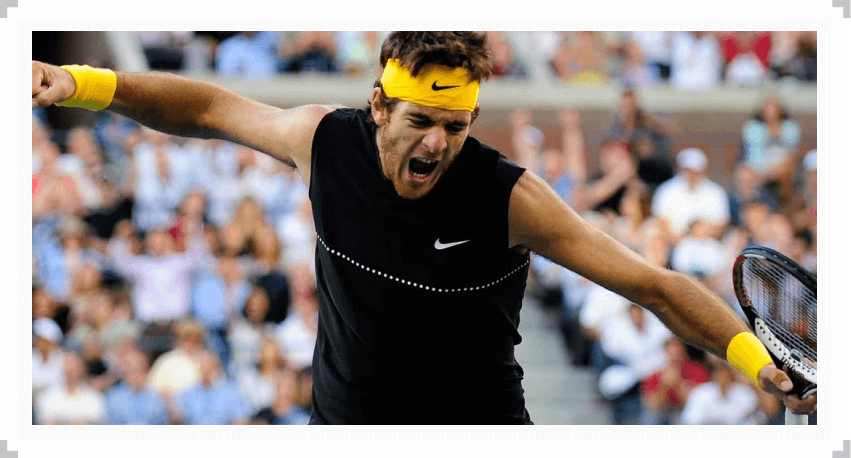 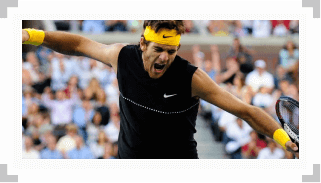 In the quarterfinal, del Potro was down a set and a break to Marin Cilic before winning 17 of the final 20 games to claim the match. Del Potro then easily defeated world number three and reigning Australian Open champion Rafael Nadal in the semifinals to reach his first Grand Slam final. Next up was world number one and five-time defending champion Roger Federer.

Del Potro rallied from being down a set and a break in the final to take the match in five sets. It was his first win against Federer after going 0-6 in their previous head-to-head matches.

Del Potro holds the distinction of being the only player not named Nadal or Djokovic to defeat Federer in a Grand Slam final. He was also the first player to beat both Nadal and Federer in the same Grand Slam tournament.

19-year-old Iga Swiatek capped off a stellar 2020 season with her first Grand Slam title at the rescheduled French Open in October. 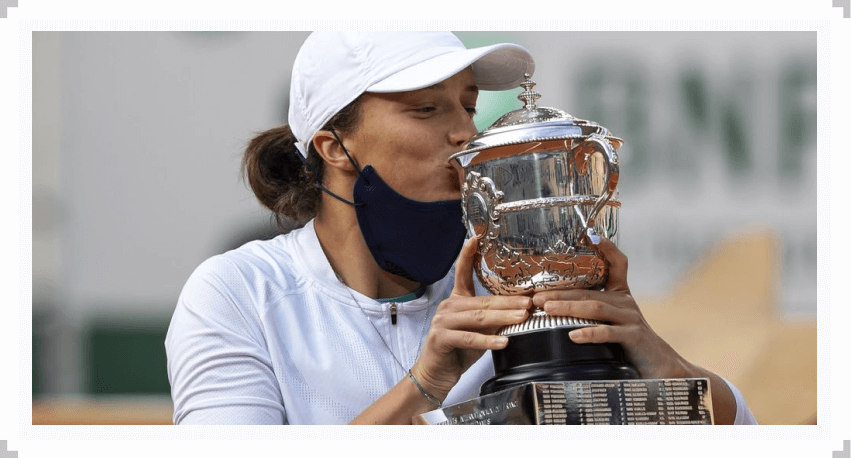 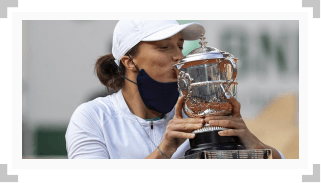 Swiatek’s dominant run included a fourth-round victory over top seed and world number two Simona Halep and a 6-4, 6-1 triumph over reigning Australian Open champ Sofia Kenin in the final. Ranked 54th headed into the tournament, Swiatek won the title without dropping a set or more than five games to any opponent.

Swiatek had pre-tournament bettings odds of +3,650 to win outright. She is the first Polish player ever to win a Grand Slam singles title and the lowest-ranked French Open champion in the history of WTA rankings. Swiatek also holds the distinction of being the youngest French Open singles champion since the King of Clay himself in 2005 and is the youngest women’s champion since Monica Seles back in 1992.

Swiatek finished the year ranked 17th and started 2021 as the highest-ranked teenager on the women’s tour. With her aggressive, all-court style of play, perhaps we can expect a few more titles from the youngster in the future. But for now, suffice to say Swiatek was an unanticipated Grand Slam champion in 2020.

Marin Cilic was seeded 14th when he won his first and only Grand Slam title at the 2014 US Open. 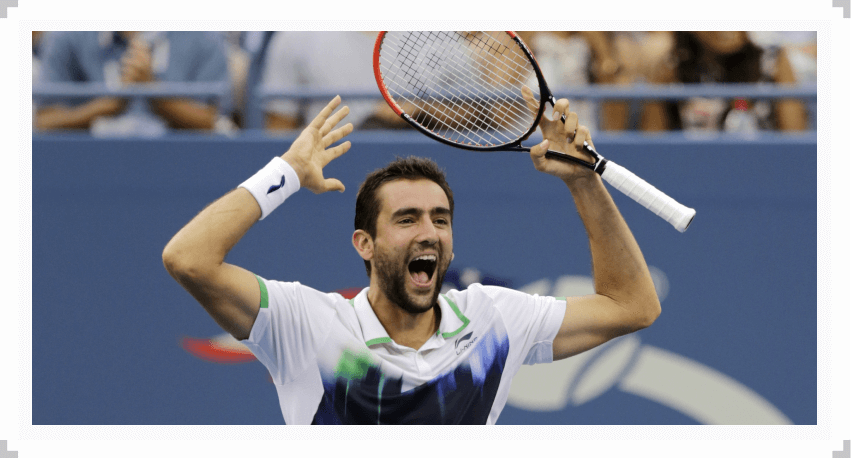 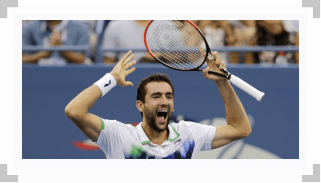 Cilic was a longshot in both fans’ and the oddsmakers’ eyes, with just +10,000 odds to win the tournament. The Croatian is one of just eight men not named Roger Federer, Rafael Nadal, or Novak Djokovic to win a Grand Slam singles title since Federer first won Wimbledon in 2003.

Frenchwoman Marion Bartoli competed in 46 previous Grand Slam tournaments before winning her first and only major title at Wimbledon in 2013 without dropping a set. She retired just 40 days later and still holds what is known as the “perseverance record” in women’s tennis.

Bartoli went into the tournament seeded 15th but had previously only been to one other Grand Slam final (she lost to Victoria Azarenka at Wimbledon 2007) and had not been past the quarters at any WTA event thus far in 2013. For these reasons, her pre-tournament odds to win were +15,000 – an implied probability of just 0.66 percent.

Aside from retiring on such an unforeseen high note, fans remember Bartoli for her aggressive, unorthodox style of play. She used two hands on both the forehand and the backhand, similar to Monica Seles, and regularly waited well inside the baseline to receive serve, even on an opponent’s first serve.

Reading about some of the biggest tennis upsets should warn bettors against wagering on short favorites. However, we hope the stories of long underdogs serve as inspiration for tennis fans and bettors alike.