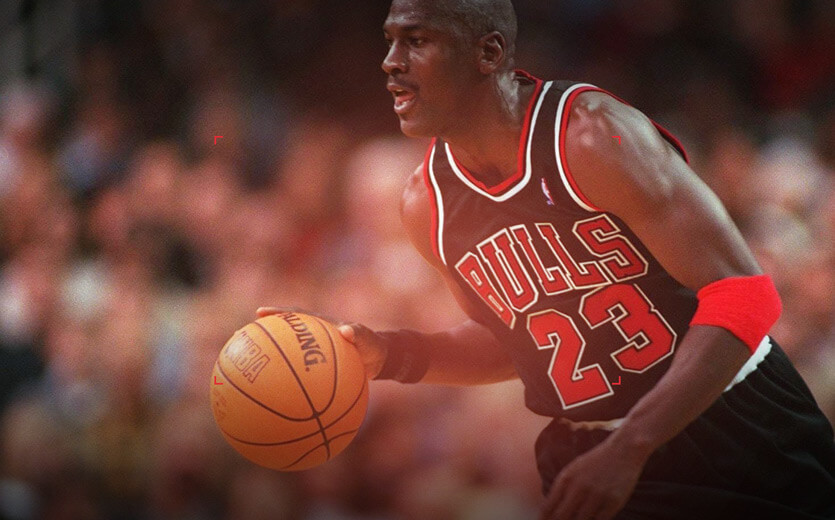 Michael Jordan is one of the most famous athletes of our time. With 11 full seasons on the Chicago Bulls, he cemented his place in the sporting hall of fame and became a living legend. But his activities off the court (more specifically in the realm of sports betting) are just as impressive.

If you look at any list of celebrity gamblers, Michael Jordan will be in the top five – not just for his love of betting, but for the crazy amounts he’s won and lost. Let’s take a look at the sporting icon’s infamous betting record.

According to Investopedia, Michael Jordan is the single richest sportsman in the world, with a net worth of $1 billion. Not all of this came from his basketball career. In fact, he ‘only’ earned $94 million from his time with the Bulls (and briefly with the Washington Wizards).

Jordan’s basketball career ended in 2003, yet his cash pot has continued to grow at a phenomenal rate, thanks to his many brand endorsements. His relationship with Nike reportedly earned the star $480 million between 2000 and 2012.

With a bankroll to burn, why does he bother to bet?

Jordan’s competitiveness is as legendary as his sporting career, from racing to see who can drink water the fastest, to trash talking Bill Clinton on the golf course. Chicago Bulls teammate, Jay Williams, spoke about Jordan’s $100,000 bets on games of ‘Rock, Paper, Scissors”.

Of course, the flip side to his deep-seeded (and somewhat insane) competitive streak is being a notoriously sore loser. In the summer of 1992, coach Chuck Daly and Jordan were having a friendly round of golf, which Daly won. Jordan, being the sore loser that he is, couldn’t let this go. In a foul mood, he pounded on Daly’s hotel room door until he agreed to a re-match, which Jordan won.

Crazy competitiveness and the inability to walk away from a loss might work wonders on the court, but it’s a dangerous combo when it comes to sports betting!

The exact extent of Jordan’s extravagant golf bets was famously outed by his once close friend, Charles Barkley. In an interview on the Dan Patrick show, Barkley described how he would play a few hundred per hole, while Jordan, on the other hand, would bet $300,000 on one hole alone.

The athlete-turned-commentator isn’t the only person to speak about Jordan’s excessive golf betting. Richard Esquinas, a San Diego businessman, wrote a book about his four-year golf relationship with Jordan.

In the 1993 book, “Michael & Me: Our Gambling Addiction… My Cry For Help!”, Esquinas tells how the two would play each other for thousands of dollars at a time.

At one point, Jordan was on a particularly bad losing streak, owing Esquinas $1.25 million which he managed to play back down to $902,000. Esquinas claimed Jordan was evasive when it came to paying up, and eventually, the two negotiated a settlement of $300,000 to be paid in installments.

In 1992, Jordan was called to testify in the drug and money laundering trial of a convicted drug dealer, James “Slim” Bouler. It turned out that Jordan had written him a check of $57,000 to clear gambling losses.

The next spring, Jordan was spotted leaving a high-roller poker game in the early hours of the morning, just before a major game. It wasn’t long before the NBA had launched two investigations into Jordan’s betting behavior. However, NBA spokesman Brian McIntyre stated that the investigation was concerned only with Jordan’s connections to ‘inappropriate’ people, and the possibility of bringing disrepute to himself and the NBA.

There was no evidence that Jordan had wagered on his own games – or any other NBA game – and in March 1992, he was cleared of any wrongdoing. No further action was taken. However, in the midst of the investigations, Michael Jordan made an announcement that would shock the world and kickstart one of the most prominent sporting conspiracy theories.

On October 6th, 1993, Michael Jordan suddenly announced his retirement from basketball. For a player what the height of his career, having won three NBA titles in a row, three NBA Finals MVP awards (1988, 1991 and 1992), plus seven straight scoring titles, it indeed seemed like a strange move.

At the time, his decision was attributed to the grief of losing his father, who had been murdered earlier that summer. However, as more stories of Jordan’s wild gambling came to light, rumors started to fly that this absence was, in fact, a secret suspension from the game due to an uncontrollable gambling addiction.

The conspiracy goes that the ‘retirement’ was a cover-up to keep Jordan’s squeaky-clean image and the good name of the NBA, intact. Both Jordan and the NBA deny the accusations, calling them ‘complete fabrications’. At one point, it was even suggested that his father’s murder was committed in retaliation of unpaid gambling debts to some undesirables.

Whether or not the rumors are true, Michael Jordan was back on the court for the Bulls in March, ending his 18-month absence from the court.

Believe It Or Not

Michael Jordan isn’t the only athlete to be the center of controversy. Fame and fortune have always fired the imaginations of conspiracy theorists, and we have to admit, they really can be entertaining! If you like a good conspiracy theory, then check out the 5 most famous sporting conspiracies.