How the Point Spread Is Formulated 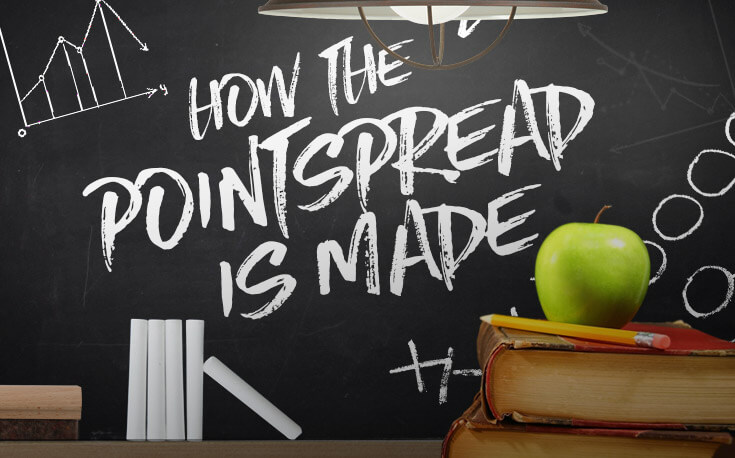 The point spread. The “great equalizer.” Just how do sportsbooks come up with this all-important number?

Most of the time, oddsmakers try to come up with a point spread that creates the least risk for the sportsbook and effectively guarantees a profit.

What is the key to that process? When do sportsbooks diverge from this time-tested approach? Below, we explain in detail the standard process for setting the point spread and why some riskier sportsbooks often take a slightly different approach.

NB: This article assumes a certain level of background knowledge about what a point spread is. If you lack that foundational knowledge, consider reading this point-spread explainer first in our comprehensive section on sports-betting basics.

The Point Spread Aims to Attract Equal Betting on Both Teams

Many people assume that the point spread is designed so that both outcomes in a game—(1) the favorite covering and (2) the underdog covering—are equally likely given the relative strength of the teams.

That’s close, but not quite right.

The majority of the time, sportsbooks try to create a point spread that will attract equal betting on both teams. Sometimes this is equivalent to a results-oriented spread—one which creates a truly level playing field—but not always because the public isn’t necessarily a rational actor.

Why do sportsbooks want equal betting on both teams most of the time? Simple. It’s a risk-free way to make money.

Sportsbooks try to create a point spread that will attract equal betting on both teams.

Look at any slate of Sunday NFL games and you will see that the payouts on the two teams in any given game are about -110, meaning bettors have to wager $110 to win $100.

The same goes for basketball betting. The image below illustrates four games on a generic NBA betting menu. As you can see, all eight teams involved in the four games have a -110 payout against the spread. 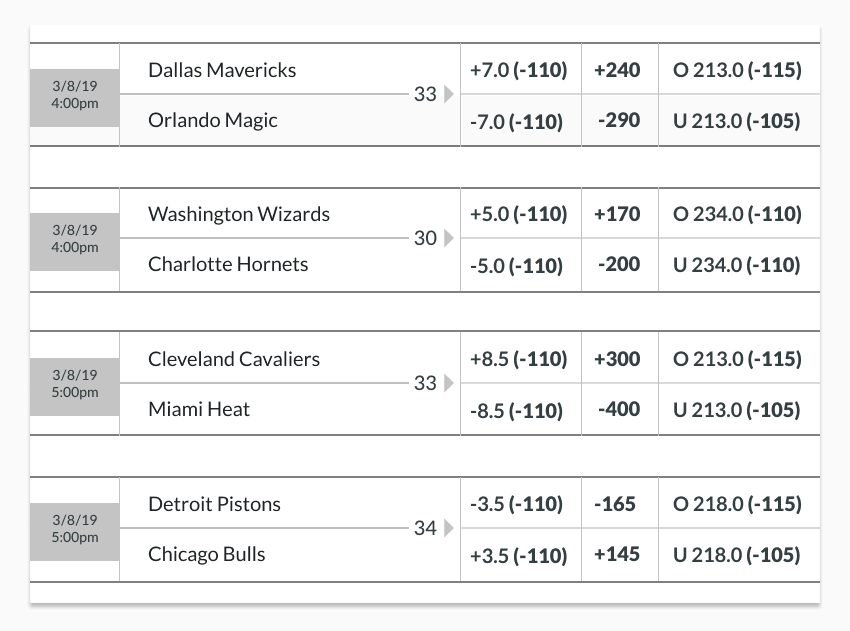 If there is equal money on both sides, there is no risk for the sportsbook.

They don’t turn a huge profit on any single game but, to paraphrase Peter in Office Space, they do it from a much bigger tray and they do it a couple of million times.

Over time, it adds up a lot.

Why Isn’t a Result-Based Spread Always the Best Choice for a Sportsbook?

As a collective, the general betting public is not always a rational actor. People will bet on certain teams more heavily than others, even when that team doesn’t deserve it based on its quality of play.

Teams that attract an irrational amount of betting money are known as “public teams.” You will find them in every sport. They tend to be the high-profile teams with massive fan bases and (sometimes but definitely not always) history of success.

There is no universally accepted grouping of public teams, but you won’t find much argument that the teams listed in the table below qualify.

If and when sportsbooks list public teams at so-called accurate odds, the public is likely to bet on them more heavily and potentially put the sportsbook at risk of a loss if the public team covers the spread.

For that reason, teams like the Dallas Cowboys and Duke Blue Devils will often be bigger favorites than the analytics indicate they should be.

Sometimes Sportsbooks “Take a Position” on a Game/Team

Sportsbooks are not generic, one-size-fits-all operations. Just like investors, some are more risk-averse than others.

Many sportsbooks are willing to “take a position” in certain circumstances, which basically means that they will set/leave the point spread so that the sportsbook needs a certain result in order to come out in the black.

When you see one sportsbook open a point spread at a different number than its competitors, those oddsmakers are likely taking a position on that game. They know that the lower/higher spread will attract bets on the team that is laying fewer/getting more points, but they are okay with that because their analysis says that the other outcome is more likely.

Say the Duke Blue Devils were slated to play the Wofford Terriers, an upstart mid-major still unknown to the general betting public. Four sportsbooks opened the spread at Duke -14.5, but a fifth sportsbook has crunched the numbers and thinks that Duke is only 11 points better than Wofford.

When you see one sportsbook open a point spread at a different number than its competitors, those oddsmakers are likely “taking a position” on that game.

In such circumstances, the fifth sportsbook may choose to open their spread at Duke -13.5. They will know that the lower spread will attract more money on Duke than Wofford., but their analysis indicates that booking more money on Duke -13.5 creates positive expected value for the company. The most likely result, according to their statisticians, is that Wofford will cover the 13.5-point spread.

Sportsbooks don’t always need to be correct when they take a position; they just need to be right often enough to be profitable on the whole. Chances are that the sportsbook you’re using has done just that. It’s still in business after all.

If you aren’t yet using a sportsbook, then it’s high time to check out our sportsbook reviews to find the one that best suits your betting needs. Always remember, never ever under any circumstances bet more than you can afford to lose.