Everything You Need to Understand Totals Betting

When betting totals, you are no longer pledging your allegiance to one team. It doesn’t matter who wins the game or by how much, the only aspect of the game you are concerned with is the total score.

Bookmakers will set a projected number of points to be scored in the game, then you decide whether the actual number of points scored will be more (over) or less (under) than the total they set.

In the following game, the bookmakers have set the total points (to be scored in the game) at 219. The number appears twice to give you the odds for picking both “over” and “under.”

(Focus on the “Total” column. Pay no mind to all the other noise.) 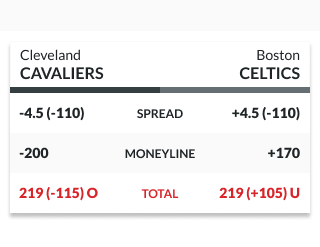 We’ve used an NBA line in our example, but totals bets are available on any sport that involves point totals.

How Do Payouts on Totals Betting Work?

In our example, you’ll notice that the odds corresponding to both the over and under have -115 and -110 next to them. Just like the moneyline, the odds attached to the over and the under indicate the prospective payout.

The odds attached to the over and the under indicate the prospective payout.

In the above example, it’s impossible to double your money by betting on either the over or the under. This is a relatively common practice on over/unders, as sportsbooks usually decide that there is an equitable probability of the point total moving in either direction. However, this is far from being set in stone.

Regardless of the sport, if there are two notoriously high-scoring teams with shoddy defenses, you may see your sportsbook assign the over as the favorite. Similarly, if both teams’ scoring is known to be lower than average, you might see the favorite gravitate heavily towards the under.

It might not seem entirely fair (or reasonable) that you have to bet $110 in order to win $100, especially when your sportsbook is telling you that there’s a 50/50 probability of either outcome.

This is simply part and parcel of using an online sports betting site. The 10% vig (or “juice”) is how sportsbooks stay afloat and profitable. It’s a price you’ll often have to pay just to bet on the spread.

A Bonus of Totals Betting: The Grand Salami

If you’re betting on the NHL, most sportsbooks offer a slight variation on available totals betting. It’s called the “Grand Salami”, and it allows bettors to wager on the total number of goals scored during one night of action in the NHL.

The vast majority of totals bets in the NHL are 5.5 (over/under), so sportsbooks will usually multiply 5.5 against the number of games in the NHL that night. Whatever (5.5 x (number of games on the schedule) is, this will be the Grand Salami.

For example, if there were two games on the NHL schedule, Pittsburgh vs. New York and Vancouver vs. Edmonton, the Grand Salami would likely be listed around 11 (-110) over and 11 (-110) under.

If Pittsburgh vs. New York ended at 3-1, and Edmonton vs. Vancouver ended at 4-1, the total number of goals on the night would 9. If you selected an under on the Grand Salami, your bet would be a winner.

Conversely, if Pittsburgh vs. New York ended at 6-5, and Vancouver vs. Edmonton was 4-2, the total goal scored on the night would be 17. As such, bettors who selected the over on the Grand Salami would be successful.