The Sunk Cost Fallacy: How to Protect Your Sports Betting Bankroll 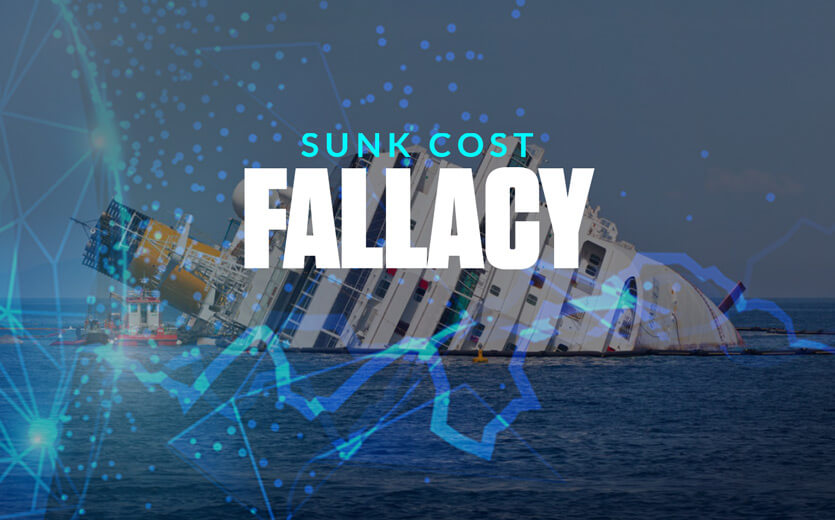 It’s safe to assume that our significant losses hurt a lot more than we enjoy our wins. You might not know it, but this strong aversion to loss is a natural human tendency that most of us share.

When we let the fear associated with past losses affect our rational decision-making process, we fall victim to the ‘sunk cost fallacy’. Learning how the sunk cost fallacy affects sports betting and how to avoid it is essential for any aspiring “sharp.”

In this article, we equip you with the knowledge you’ll need to avoid the pitfalls of the sunk cost fallacy, and start maximizing the size of your bankroll.

What Is a Sunk Cost?

“Sunk cost” is a term that economists use for any paid cost that can’t be regained or reclaimed.

Think of someone buying a ticket to a hockey game. Somewhere between where she parked her car and the entrance, she lost her ticket. She searched everywhere, but couldn’t find the ticket. As a result, she was denied entry to the game. She can’t recover this cost, and her money is lost forever.

If someone owned a neighborhood grocery store, the lease payments on the physical space and advertising spend would be a sunk cost.

When we define “investment,” we don’t just mean that it’s purely economic. Investments can refer to money as well as time and emotions. Psychological stakes are just as significant as monetary investments when it comes to sunk costs.

What, Then, Is the Sunk Cost Fallacy?

The ‘sunk cost fallacy’ is when we let these irreversible investments (time, money, or otherwise) affect our rational decision making. We incorrectly (fallaciously) assign causality between our past, sunk cost investments, and our current decisions/investments.

Think back to the example of lease payments on a grocery store. If there is absolutely no way to turn a profit, the rational move would be to close the business. Yes, the owner would lose some money on the lease payments, but they’d lose less money by cutting their ties rather than keeping the business open.

If the owner decided to continue to throw money at the grocery store (because he’d already invested so much in the venture), they’d be guilty of the sunk cost fallacy. Past sunk costs should have no bearing on our future decisions.

Where Did the Sunk Cost Fallacy Come From?

If you’ve been reading the rest of our betting psychology series, you’re already familiar with Amos Tversky and Daniel Kahneman, the two pioneers of the cognitive biases field, or what causes humans to make irrational decisions. Their groundbreaking work brought the sunk cost fallacy into the mainstream.

In their revolutionary study, they showed that humans tend to attach far greater value to losses than gains. In fact, the pain of losing is nearly two times stronger than the joys of winning.

Additionally, we don’t place nearly as much value as we think on our “well-being” or “wealth.” As humans, we’re much more concerned with winning and losing.

The more we’re invested in something, the stronger the effects of sunk cost fallacy.

The Origins of the Sunk Cost Fallacy Go Back Centuries

According to Kahneman and Tversky, feeling stronger about losses than wins can be traced back to our earliest evolutionary beginnings. Those roaming around in caves in prehistoric times were much more likely to survive if they prioritized not dying, instead of prioritizing achieving a goal, regardless of what it was.

Our ancestors ranked avoiding the ultimate loss (death) as higher than any gain. This tendency has obviously been passed down onto us. It might seem crazy that what our millennia-old ancestors did has a connection to our decision-making process, but the science stands up.

The Most Famous Example: The Concorde Fallacy

The Concorde was the world’s first supersonic passenger airline, able to fly at a top speed of over 1,300 mph. With the ability to fly from New York to London in a mere three and a half hours, the Concorde was the fastest commercial airplane ever made.

A single trip, however, was 30 times more expensive than a regular passenger jet, and the airplane had to be heavily subsidized by the British and French governments to stay in the air.

From the high-ups at Air France and British Airways to the UK and French government representatives, few wanted to give up on the Concorde. The psychological and financial investments in the airline these parties had made were so great that the Concorde airline persevered against better judgment.

Eventually, the Concorde was permanently grounded in 2003. It remains one of the biggest disasters in the history of aviation, continued only because of the sunk cost fallacy. 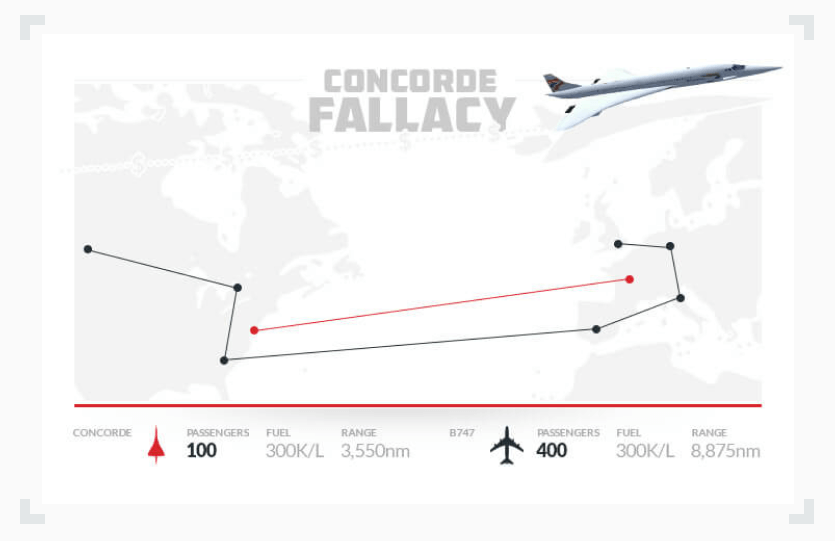 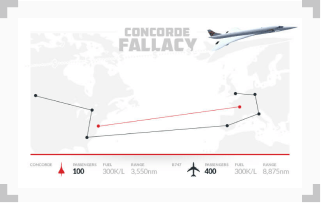 Sunk cost fallacy is more prevalent than the average person imagines. Loss aversion is a dominant force is all of our lives, and the desire to avoid losing often causes us to do very odd things.

In our guide to managing your bankroll like a professional bettor, we talk about the importance of staying disciplined when it comes to wagering size.
Under no circumstances would we ever recommend that a bettor increase their unit size to make up for lost bets. Bettors who commit this are classic victims of the sunk cost fallacy.

Say, hypothetically, that a bettor has spent his Sunday betting against the spread in the NFL. This bettor wagered $5 on four separate games and lost every single bet. As a result, he lost $20, and his bankroll is reduced from $100 on Sunday morning to $80 on Sunday night.

Wanting to recoup his losses after a disastrous Sunday, the bettor wagers $20 on Monday night’s game.

If the bettor had lost his Monday night wager, it would mean that his bankroll would have been obliterated to $60. This would equate to an utterly disastrous 40% reduction in his bankroll in a mere 36 hours. 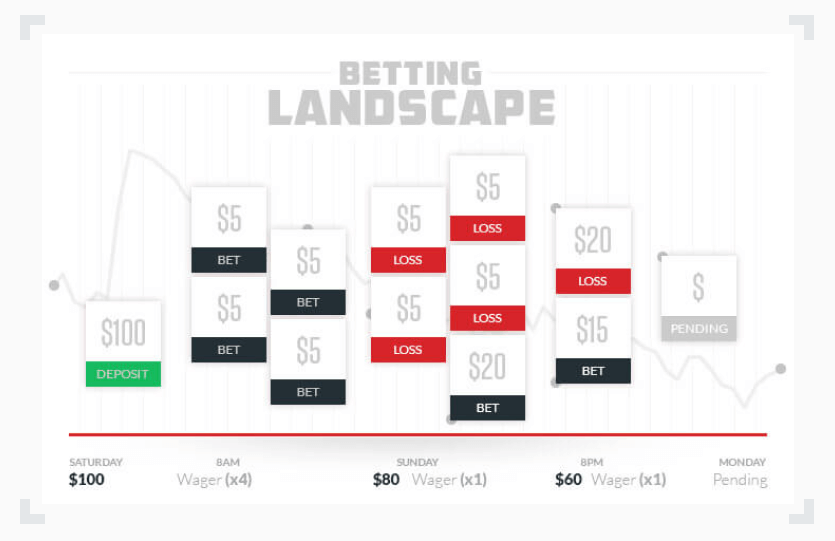 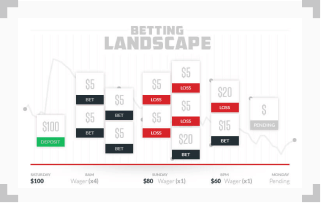 A sharp wouldn’t fall victim to the sunk cost fallacy here, and would instead continue to make conservative, measured bets at a reasonable bet size.

Chasing losses like the bettor in our hypothetical example isn’t smart, prudent, or professional. However, it’s all too common. Acting irrationally usually ends up coming back to bite us in the rear end, and discipline is essential for long-term success in sports betting.

Losing bettors should strive to avoid cognitive biases and recalibrate their use of sharp strategy.

Use the Sunk Cost Fallacy to Increase Betting Win Percentages

The sunk cost fallacy helps us understand that the human mind loves to play tricks on us (We’re hardwired to hate losing!). Recognizing this will help you analyze your bets rationally, and prevent you from wasting money on risky wagers just to win your losses back.

To avoid falling into any other psychological traps that frequently affect bettors, check out the rest of our betting psychology series.