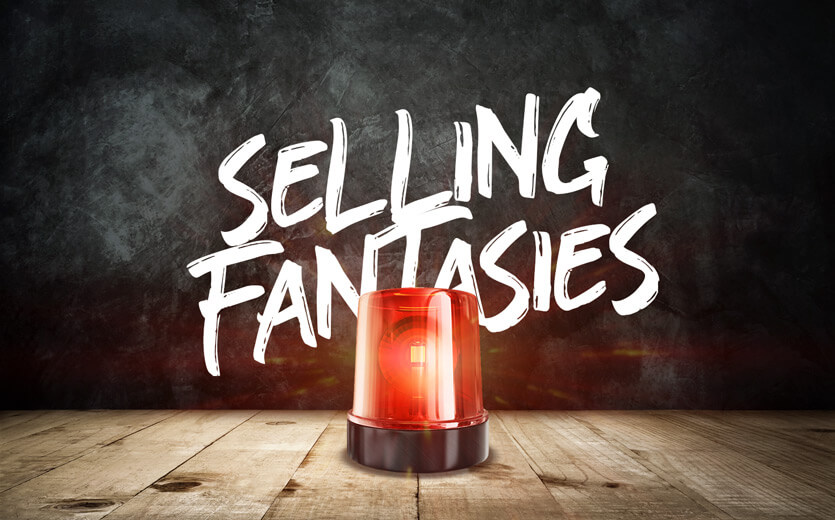 It’s never been harder for the average person to distinguish reality from fantasy on the internet. There are more online niches than ever before, and trolls and frauds have infiltrated every major social media platform. Forums, once the refuge of the hardcore devotee, are beset by the same problems as social media plus spambots. The distinction between legitimate sports handicappers and so-called “scamdicappers” in many ways exemplifies this dark aspect of the digital age.

The reach of social media has led to a surge in the decades-old practice of sharp bettors selling their picks. But these picks are being peddled by both experienced, knowledgeable ‘cappers and complete and utter frauds, alike.
Given that central authorities are few and far between on social media, it can be hard to distinguish the good from the bad. After all, everyone behind social media-based pick services represents themselves as a sports-betting expert. They all curate their accounts to best represent their product: the ability to predict sporting events at an above-average rate. 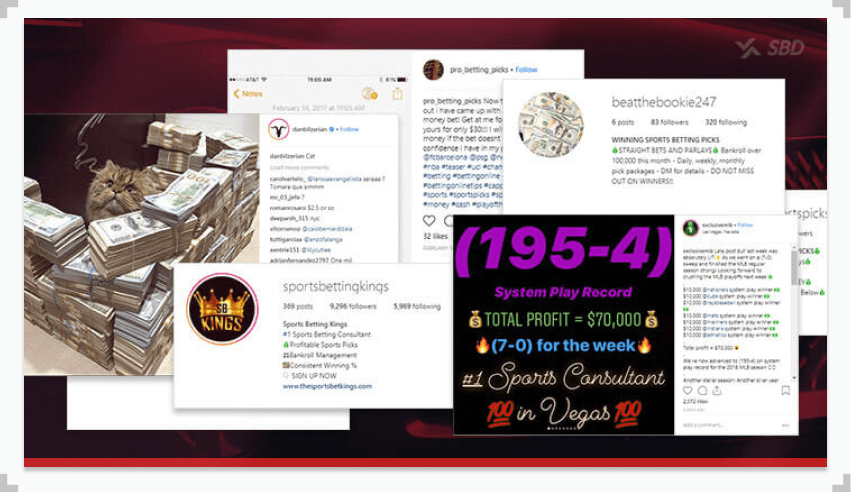 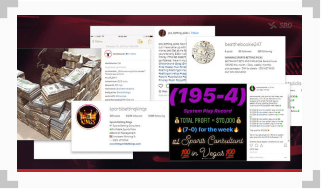 Of course, what this looks like in practice varies from account to account, as self-promotional styles differ significantly. It’s the handicapping accounts that promote a flashy lifestyle while consistently over-promising and under-delivering on their betting picks that we deem “scamdicappers.”

We’re here to both alert you to the scamdicapper phenomenon – which is particularly endemic to Instagram — and explain just how scamdicappers operate. Once you have a bit of knowledge and the right mindset, recognizing the real and the fake in the world of sports betting isn’t as hard as you might think.

To understand how scamdicappers came into being, and why they’re able to sell fantasies so successfully, its necessary to know how legitimate sports-betting handicappers operate on social media.

The bulk of handicapping services start from regular bettors creating an account on social media, documenting their picks, going on a winning run, garnering some followers and then voila: they’re able to successfully sell their predictions. Usually, this comes in the form of a “VIP” membership, where bettors pay a fee to receive picks daily or weekly. 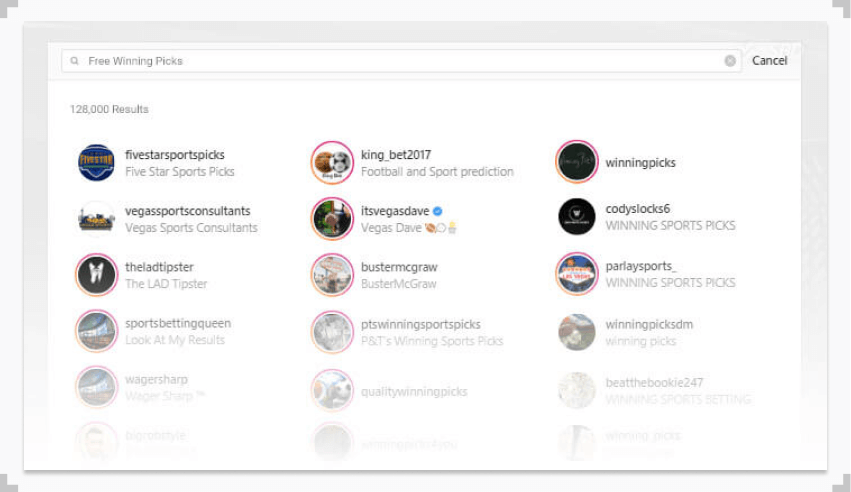 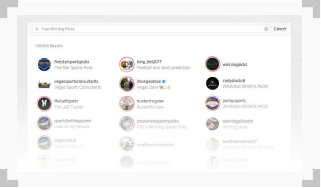 To get an insider’s view of the differences between the real handicappers and the fantasy scamdicappers, we spoke to @Kofsports, who runs a successful handicapping business that’s been lauded for its transparency, honesty, and above-average percentage of winning picks. He describes his business model as follows:

I have a daily blog that I post my picks [on] where all of my VIP members log in to read my picks. Doing so exposes me to the public eye, I [have] enough members that if I posted a video saying I went 5-0 the night before when I really went 1-4, people would comment and call me out. Additionally, I also keep an updated public google spreadsheet with all of my pick histories so that people can match it with my VIP blog. At any time, anyone who’s interested in my pick history … can match my spreadsheet to my blog and discover that every claim I make about my picks is legit.

The key take away from this is that transparency is necessary for running a reputable pick-selling service.
Another sure sign of a legitimate handicapper is a modicum of modesty. Legitimate handicappers do not brag about betting unrealistic portions of their bankrolls, or make claims about providing clients with a consistent win percentage over 60%. This just doesn’t happen in sports betting. If a pick service is selling something that sounds too good to be true, it is.

Accounts like the ones Kof run are fairly commonplace, at least in their aesthetic. They don’t show million-dollar cars, stacks of cash, or other markers of a high-roller lifestyle. The qualitative, analytic side of sports betting is privileged above all else. The results speak for themselves.

Ultimately, Kof and others of the same ilk emphasize the core components of their product: an above-average winning percentage that a regular Joe couldn’t easily obtain.

Given what’s described above in terms of legitimate pick services, you can probably guess what the accounts of scamdicappers look like. But we got @Kofsports to shed some light on how scamdicappers go about their business, nonetheless.

They sell picks day by day with screenshots. They don’t document their picks. On days when they don’t sell any picks, they can post a video smoking a cigar or sipping champagne claiming that they hit a 10-team parlay, because they don’t have anyone who can call them out. Here and there you will see some of them post that they lost, but that’s when they know they’re going to be forced to answer for last night’s losing picks.

As Kof touches on, scamdicappers are likely to eschew the tangible traces hard work, and instead focus on what their purported sports-betting winnings beget. They promote their lifestyle, flashy clothes, expensive meals, stacks of cash, encounters with celebrities, and vapid inspirational messages.

In essence, they’re selling a fantasy, emphasizing the results of successful sports betting, but rarely the process.

The sad reality is that scamdicappers get rich preying on unsuspecting victims who don’t have the experience, education or knowledge to see through their thin façade. This problem is often compounded by the fact that the glossiest accounts have the most followers, adding to their air of legitimacy.

The barriers that once existed in creating a handicapping service have been torn down by the equalizing effect of social media, where everyone who wants to have a voice can have one. The most popular platform for scamdicappers is Instagram. A predominantly visual platform, Instagram makes it much easier for scamdicappers to sell their customers on a lavish lifestyle than text-based platforms like Twitter. On Instagram, the voice that gets heard tends to be the one that is the most visually appealing, not the one that’s the most logical.

Scamdicappers are simply following in the footsteps of what has worked for lifestyle bloggers, travel journals, models, and many other types of social media accounts. The difference is that scamdicappers are after your bankroll.

It makes sense that someone debating whether to sign up for a picks service would initially be attracted to an account filled photos of jewelry and stacks of cash. That’s what people signing up for a picks service are chasing, after all. There’s no denying that these accounts are indeed more visually appealing than those comprised of a monotonous selection of betting slips.

However, it’s exactly this glitz and glamor that scamdicappers use to mask their shortcomings. Instead of selling their services on meticulous research and sharp analytic ability, they lure in bettors with bombast and false get-rich-quick promises. Unfortunately for them, there is no substitute for meticulous research in the sports-betting world.

As sports betting continues to occupy an increasingly significant chunk of sports culture at large (for example, the week of the Rogers Cup, a Masters 1000 even on the ATP circuit, more people were posting about betting on tennis (#tennisbetting) than on the actual tournament (#rogerscup2018) itself) differentiating between legitimate social media handicapping accounts and scamdicappers will become an increasingly urgent issue.

Still want to know more about the scamdicapping phenomenon? We wrote an entire article designed to equip you with the 6 simple tips for spotting a scamdicapper, and another on how to accurately distinguish between fantasy and reality amongst all the noise on social media.