Bet at the Biggest Horse Racing Tracks in the USA 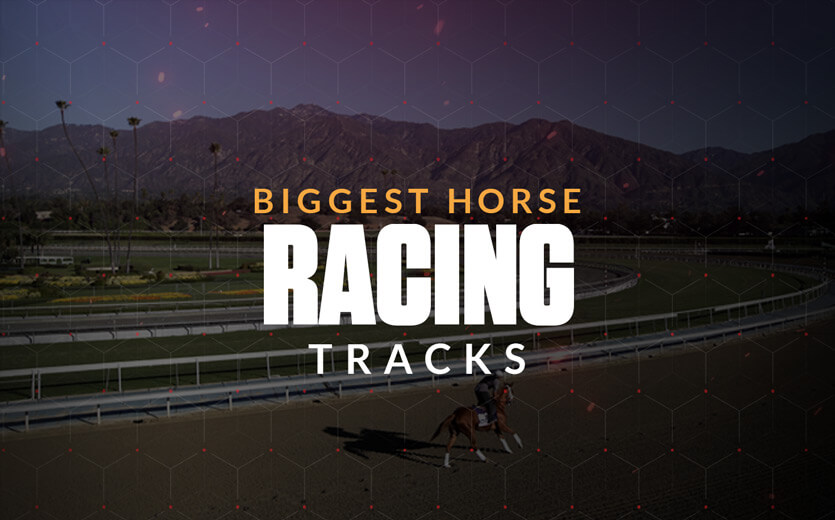 While horse racing takes place on nearly every day of the year, certain tracks hold the large majority of races. The meccas of horse racing are in the United States, with tracks in California, Florida, Kentucky, and New York holding the biggest tracks in the sport.

Due to the fact that horses go from track to track and are constantly moving up and down in class, it is good to know what the big league venues are, where there is somewhat consistent racing, and where the lesser tracks are by default.

What Makes a Big League Track?

Being that the biggest days in horse racing are typically Saturdays, what makes the elite tracks stand out is that while they have huge cards on the weekend, the level of competition during the week is usually solid too.

Of course, the biggest horse races are at tracks that boast the highest betting volume, not to mention the biggest crowds. As such, these tracks naturally tend to draw the most elite horses in the sport.

Let’s take a look at the biggest circuits.

The Biggest Tracks in Southern California

With the San Gabriel Mountains in the distance, it is a beautiful facility that has hosted the Breeders Cup nine times. Bob Baffert, Hall of Fame trainer and the conditioner for the last two Triple Crown winners, calls Santa Anita his home track.

When Hollywood Park closed in 2013, Santa Anita picked up a lot of their racing schedule including prestigious races. However, after a high volume of horse-related health incidents late in 2018, Santa Anita is only open for “limited racing” until further notice.

For generations, from July to September, Del Mar hosted one of the best horse racing seasons. That meet remains intact and consistently receives a ton of betting volume, but when Hollywood Park closed in 2013, Del Mar picked up even more racing. Now, it has major winter meets in both November and December as well.

The Biggest Tracks in Florida

There was a time that the Sunshine State had strong racing cards for most of the year at a variety of tracks. However, Calder Race Course is gone now and Tampa Bay Downs has become a decidedly mediocre track. That leaves just one elite track in Florida.

Situated between Miami and Fort Lauderdale, Gulfstream Park essentially runs all year round.

Gulfstream Park excels with its winter racing due to Flordia’s temperate winter climate. When the rest of the country is in the throes of winter, Florida generally has warm conditions.

The Biggest Tracks in Kentucky

The huge majority of racehorses in the United States are bred in the “Bluegrass State” or, more commonly known as Kentucky. It’s considered to be the heart of the racing industry, where horses are bred, raised, and where they start training. Unsurprisingly, the state boasts have several excellent tracks.

Home of the Kentucky Derby, horses at Churchill Downs run below the iconic Twin Spires, responsible for perhaps the most recognizable images in all of horse racing.

Churchill has hosted the Breeders’ Cup nine times. The racing frequency at Churchill Downs is variable depending on the season, but tends to be high particularly leading up to the Run for the Roses. You can find online sites to bet on races at Churchill Downs here.

For years Keeneland did not have a public address announcer. They didn’t want to disrupt the natural beauty and sound of horses running. In other words, they value tradition and the essence and purity of racing in Lexington.

They run two high end meets that last around two weeks each, respectively. The Blue Grass Stakes is a premier Kentucky Derby prep race in April, while the fall meet in October features a half dozen preps for the Breeders’ Cup.

The Biggest Tracks in New York

A stone’s throw from John F. Kennedy airport, the Big A has less highly regarded dates when compared to other New York tracks perhaps because Belmont and Saratoga are so revered. When the sun comes out in the spring at the Aqueduct, it hosts many Kentucky Derby prep races like the Gotham Stakes and Wood Memorial.

Situated on Long Island and home to the Belmont Stakes (the third jewel of the Triple Crown), Belmont Park has two meets. The first begins in late April and runs through mid-July and the second from mid-September through late October.

Opened in 1905, Belmont’s enormous track, “Big Sandy” is a-mile-and-a-half long. This allows the horses to run mile races that have just one turn. It features one of the longest home stretches which can often be an advantage for horses coming off the pace. However, the track’s long straightaway can also leave frontrunners tired when it seems like the final drive is never going to end.

Essentially every great racehorse to ever run has spent some time at Belmont, including Secretariat who completed the Triple Crown by winning the 1973 Belmont Stakes by 31 lengths.

Opened in 1893, Saratoga has something for every fan of horse racing.

The racing is elite, crowds large, and the downtown area is packed with bars and restaurants full of racegoers. Known affectionately as the Graveyard of Champions, champions Man o’ War, Gallant Fox, Secretariat, Rachel Alexandra, and American Pharoah all came up short at Saratoga.

Several other tracks either hold one or two big days of racing each year or have pretty good if not great competition throughout their meets.

In the Chicago suburbs, Arlington has a pristine old grandstand that was rebuilt after the original was destroyed by fire.

Every August, Arlington’s International Festival of Racing, known for turf racing, features three top-level races all in one day. Racegoers can bet on the Arlington Million, Beverly D., and/or the Secretariat Stakes in one go.

Located just outside of Baltimore, Pimlico is only known for two one-day-only events. It hosts the Preakness Stakes, the second jewel of the Triple Crown on the third Saturday in May. Additionally, Pimlico hosts a strong program on Black-Eyed Susan Day which is the Preakness equivalent for female horses.

On the Jersey Shore, Monmouth holds the first big three-year-old race after the Triple Crown. It always has a huge crowd and a great card for the Haskell Invitational, which takes place in either in late July or early August.

Monmouth has been around since 1870, and the level of racing has varied throughout the years. It recently became the first track where sports betting was allowed in the United States, which may help the racing industry dramatically as some revenue could pour into the track.

Home of the Festival of the South each April, Oaklawn Park in Hot Springs, AR, is where American Pharoah won the Arkansas Derby before going on to the Triple Crown. Recent champions Curlin, Rachel Alexandra, and Zenyatta all raced at Oaklawn.

Opened in 1952, there is solid racing throughout the meet at Fair Grounds. New Orleans’ Fair Grounds track is equally as historic as the town it’s situated in. Running from late November through March, the Louisiana Derby has produced three Kentucky Derby winners. Fair Grounds tends to have many of the same trainers, jockeys and owners as Churchill Downs.

An informed bettor is the most likely type of gambler to cash winning tickets. Reading up on some tips as well as becoming familiar with the basics and knowing the rules of horse racing will go a long way to becoming a more informed horse bettor.

Whether it be horse racing or anything else you might be interested in, we have betting insights, and knowledge to you’ll need to bet with your brain.