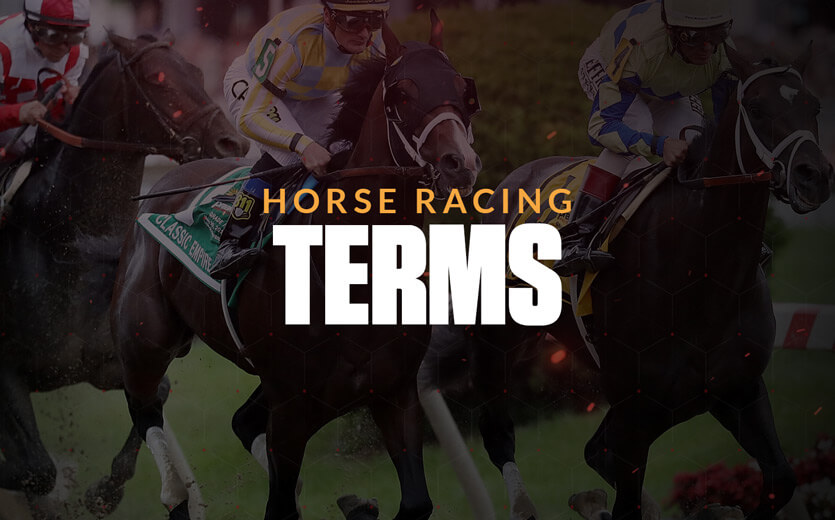 While horse racing is not rocket science, like many sports there are expressions and words that are unique to it. In order to be a successful bettor you certainly don’t need to know every term, but there are some that would be beneficial to know before placing a bet.

How do you know when a race is going to begin? In what increment do they describe the distance between horses during a race? What do we know about the horse’s activities on non-race days?

Let’s go through some keys words that you hear around the track.

This is the time a race begins. If the first pitch of a baseball game is slated for 7 pm, the game can start anywhere from 7:00 pm to 7:05 pm or 7:10 pm. Post time functions in the same way by providing an approximate starting time for the race. Sometimes there is a minor delay, an equipment problem, or a horse that is being stubborn before loading into the starting gate.

While horse races will not begin before their scheduled post time, they can be delayed a minute or two. The term “post” refers to the starting gate, so post time is when all of the horses have arrived at the gate to begin their race. Though not perfectly prompt every time, generally races begin very close to the scheduled post time.

In most parts of the world, the metric system (kilo, meter, grams) is used for measurements. In the United States, the imperial system (feet, inches, pounds) is preferred.

At U.S. tracks, some abnormal imperial terms are used. This results in vocabulary specific to horse racing tracks and sportsbooks.

The most common types of longer horse races are run at one mile or a mile-and-a-quarter. One and a one-quarter mile is the distance of the Kentucky Derby and Breeders’ Cup Classic among other marquee events. However, shorter races are run at fractions of a mile.

Frequently during the running of a horse race, the announcer will indicate how much distance remains in the race by saying something like, “one furlong to run.” What the announcer means is that there is one-eighth of a mile left before the leader hits the finish line.

In order to indicate the distance that separates horses frequently the term length is used. Length is the size of one horse. If a horse is running at the tail, the back of another horse, he is one length behind. When Secretariat won the 1973 Belmont Stakes by a record margin, he won by 31 horse lengths.

If horses are closer together than even half-a-length, the term neck is frequently used. A horse that is “just a neck behind” is positioned the length of a horse’s neck back of the horse in front of him/her.

The closest two horses can get to each other before they are tied is one head apart. If a horse is just a “head” behind, he is as close to overtaking the horse in front of him as possible; he is a “bob” or “stride” away from overtaking or tying the horse ahead of him.

While betting on horse racing can seem complicated because of foreign terminology, or the long list of types of bets that are available, wagering can be pretty simple. We go over horse racing betting types and basics extensively as part of our how to bet series, but here’s a quick refresher on the essentials.

The backbone of horse racing is betting to win. A win bet is a straight wager and does not require multiple things to happen in a race or series of races in order for you to win money. There are three types of straight wagers. Most tracks have a minimum of $2 on straight bets.

Choose the horse who crosses the finish line first and you are a winner. This is the most common and easiest bet at the track.

If you are more risk averse or unsure about a certain horse, betting to place means you win your bet if the horse finishes first or second in a race. Because the horse can finish in either spot, the payouts will be less than on a win bet.

If someone says that a horse “placed,” that means the horse finished second.

Betting to show is not particularly profitable, but is the most secure way to have fun and not lose a lot. If you pick a horse to show all it needs to do to return a small profit is finish first, second, or third in a race. Show bets frequently return $3 total or less on a $2 wager.

The term a horse “showed” indicates the horse finished third in a race.

While there are numerous types of exotic bets, they all come down to one of two concepts: horizontal wagers or vertical wagers.

An exacta is a vertical bet where you must select who will win the race and who will finish second in the correct order.

A trifecta challenges you to pick the exact order of the top three finishers in a single race.

The superfecta requires you to pick the winner, runner up, show horse, and fourth place finisher in the correct order in order to cash your ticket.

The word horizontal denotes something straight across, and in horse racing that means you’ll have to pick the winner of several horse races. In essence, horizontal wagers mean you’re creating a wager where you have to pick winners across races.

In Daily Doubles, Pick 3’s, Pick 4’s, Pick 5’s, and Pick 6’s you must identify the winner of multiple races in a row.

As you would expect, the Daily Double requires you to pick the winner in two straight races, the Pick 3 is three races in a row, up to the almighty Pick 6 which is essentially a six-race parlay where you must select the winner in each of the six consecutive races.

At its core, horse racing is competitive, but equally competitive. Having the best horses beating younger or just slower horses would prove unfair.

Of course, there are myriad race types, so you’ll have to know the vocabulary used to describe them before you start betting.

A horse who has never won a race is called a maiden. Once a horse breaks their maiden, winning a race that is very likely against other horses who have never won, they are no longer a maiden and cannot compete in races designed just for winless horses.

A claiming race means each horse in the event is available to be bought before it begins. There can be maiden claimers (winless horses) up for sale too.

There are also optional claiming races where each owner decides whether or not he wants his horse up for sale that day.

A horse that runs in allowance races are not for sale and almost always have won at least one race.

Allowance races can have restrictions, such as only being open to older horses or female horses.

The best quality allowance races are labeled stakes. This means there is a significant purse available which obviously attracts the best horses.

Of course, with larger purses come faster horses. As such, you know that if a horse wins a stakes race they are a pretty high-quality runner.

There are various types of stakes races.

The best of the best run in graded stakes races, with the top events like the Kentucky Derby or Breeders’ Cup Classic being designated as Grade 1 attractions. Just below a Grade 1 race is a Grade 2, and Grade 3 contests are just below Grade 2 contests. Virtually all graded stakes races are at the top tracks and involve the quickest horses at a given track.

Grade 1 races are the best of the best featuring the top horses and they have the largest purses, often in excess of $1 million. All of the most famous races, like the Kentucky Derby or Breeders’ Cup, are Grade 1. A horse who wins a Grade 1 race is like a player that has won an MVP. It is a distinction and achievement not to be understated.

Grade 2 races are just below Grade 1’s. They rarely have stakes of over $1 million, but almost always are worth at least $100,000. Frequently on big race days, the undercard races are Grade 2’s. On Kentucky Derby Weekend the Alysheba Stakes, Eight Belles Stakes, Turf Sprint, American Turf, and Distaff Turf Mile are all Grade 2 events.

Grade 3 events are high quality, and don’t occur every day, but are below Grade 1 and 2’s.

These events can be the main attraction at a smaller track on a big day, like the San Francisco Mile at Golden Gate Fields, or the Longacres Mile at Emerald Downs. Grade 3’s can also be secondary races during big race days, like the Brooklyn Invitational and Jaipur Invitational on Belmont Stakes Day in New York.

After graded races are listed stakes, which are notable because they are not of the quality of a graded event, but they are above a normal stakes race. A normal stakes race is the day-to-day feature race, best race at a good race track on many days, or a notable occasion on a big weekend at a smaller venue.

Though they are rarely seen, steeplechase races are events that include hurdles the horses must jump over several times during the course of an event.

They are almost always run on grass and frequently over great distances, sometimes two or three miles. Jumpers usually do not run in flat races, and rarely do thoroughbreds shift from a race without hurdles to one with them.

These are some of the things that make horse racing unique. Terminology and language initially can be intimidating, but once you learn them they become second nature.

To learn more about horse betting, check out our horse betting 101 article as well as our guide to horse racing odds. Keep in mind, the more you understand, the better your shot at winning.