No Contest Boxing & MMA Fights – What Happens to My Bet? 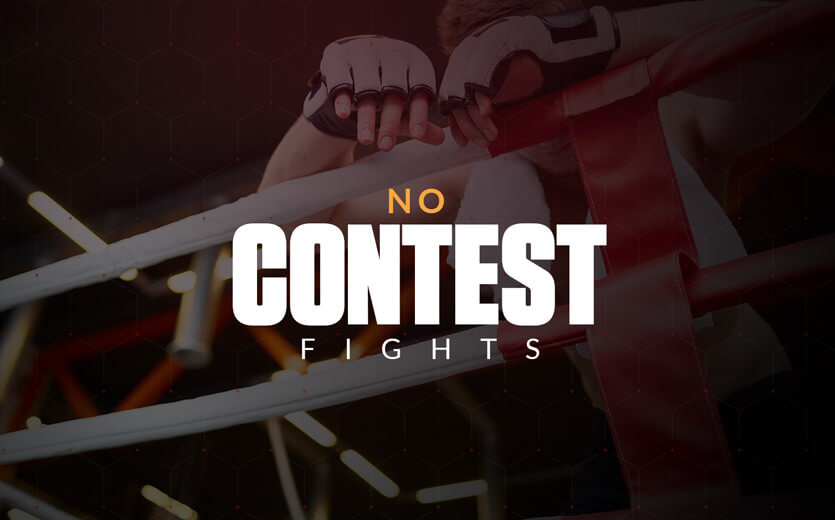 No contest is an unusual decision in combat sports such as boxing and MMA, but bettors still need to be aware of it as a potential outcome that could affect their bets.

This brief guide defines what a ‘no contest’ decision means in both boxing and MMA, how it affects wagers on the fight in question, and even shares a few famous examples of no contest fights.

Here’s everything you need to know about no contest decisions when betting on combat sports.

What Does ‘No Contest’ Mean?

No contest is an official fight result used in both sanctioned boxing and mixed martial arts events. A no contest occurs when the fight must be ended for a reason deemed out of the control of both fighters.

Neither a winner or loser is deemed in the result of a no contest boxing or MMA fight.

The reasons for a no contest decision vary, but the impetus for the fight to end must be either an ‘Act of God’ or indirectly related to the efforts of the fighters themselves.

Here’s a non-exhaustive list of reasons a fight would be called no contest:

Traditionally, no contest boxing results also occurred when sport commissions suspected match-fixing. Suspicions of match-fixing still abound, but they are generally disregarded as sheer conspiracy at the highest levels of combat sport.

Years ago, a lack of aggression on the part of both fighters could also result in a no contest decision. This hasn’t been much of any issue since boxing was widely legalized at the turn of the 20th century.

How Will My Bet Be Graded After a No Contest Fight?

MMA or boxing matches called no contest are handled like a draw in which the betting line does not include ‘draw’ as a wagering option.

In simpler terms, you’ll generally get your money back if the fight you bet on is called no contest. Online sportsbooks tend to treat these results as a push.

When a ‘push’ occurs with any of your sports bets, you can expect the return of your wager in a timely fashion, with no payouts given on either side. The same is true for most other combat sport decisions in which no clear winner is determined.

Let’s examine one clear exception you need to be aware of when it comes to no contest boxing or MMA results being deemed a push at your sportsbook.

Drug Testing & No Contest Rulings After the Fact

When betting on a fight or other sporting event, your wager will typically be graded a win or loss immediately after the conclusion of the event in question.

This is all well and good 90% of the time, but what happens when one fighter later fails a drug test resulting in a no contest ruling after you’ve already settled with the sportsbook?

Because it takes time to analyze the results of drug tests, there have been multiple instances of UFC fighters winning a bout only to have the result later ruled no contest once the UFC’s anti-doping partners reveal an abnormal test result.

In these cases, your sportsbook will likely not revisit the wager, as graded bets are generally considered final.

If you lose money backing a fighter who is defeated by an opponent later deemed to have cheated by violating the UFC’s substance policy, don’t expect to get your money back. Of course, you also keep the winnings if you did back the fighter who returned an abnormal result.

Serious business aside, there have been some entertaining and downright shocking no contest results over the years. Let’s look at three of the most interesting to close this piece out.

Houston v. Dalby: Too Much Blood on the Canvas

You probably didn’t land on a page about combat sports if you have an issue witnessing violence. But Cage Warriors 106 between Ross Houston and Nicolas Dalby took the shock and awe of MMA to an entirely different level.

Competing in London for the welterweight title, the fight was brutal. So brutal, in fact, that the canvas was so inundated with blood by the start of the third round that both fighters couldn’t keep their footing.

It was a veritable slip n’ slide straight from the House of Horrors, and the fight was called off and ruled no contest.

While we’ll spare you the video content (a YouTube search will do the trick), the boys did have a nice beer together afterwards. See them break down their historic fight in the video up top.

Boxing referees are there to ensure a clean fight and safeguard the fighters from undue injury. But when Bernard Hopkins took on Robert Allen in a 1998 heavyweight bout, referee Mills Lane’s attempt to keep things clean backfired.

As Lane attempts to break up a clinch and break the fighters apart, he inadvertently launches Hopkins out of the ring in a swift move you’d expect to see at a scripted WWE event than a real fighting event.

Hopkins was injured after being literally ejected from the ring and was unable to continue the fight.

When it comes to fighting, timing is everything. And in one of the more impressive MMA moments of all time, Tyler Bryan and Shaun Parker simultaneously landed two knockout punches, falling to the mat in unison as if they were play soldiers in one of those elaborate war reenactments.

You can see the shock on referee Shonie Carter’s face as he signals for a no contest in the video above.

While some MMA fans feel this highly, highly unusual result should have been considered a draw, we’re glad Shonie made the call he did. Otherwise we couldn’t include this fascinating piece of MMA history on this list.

Sports Betting Dime’s Betting 101 Series has you covered with all the basic info you need to get started wagering on a wide variety of sports.

You can find answers to the most commonly asked sports betting questions, along with picking up a number of pointers to help you bet smarter and make more money.

Please remember to wager responsibly as you enjoy the action!