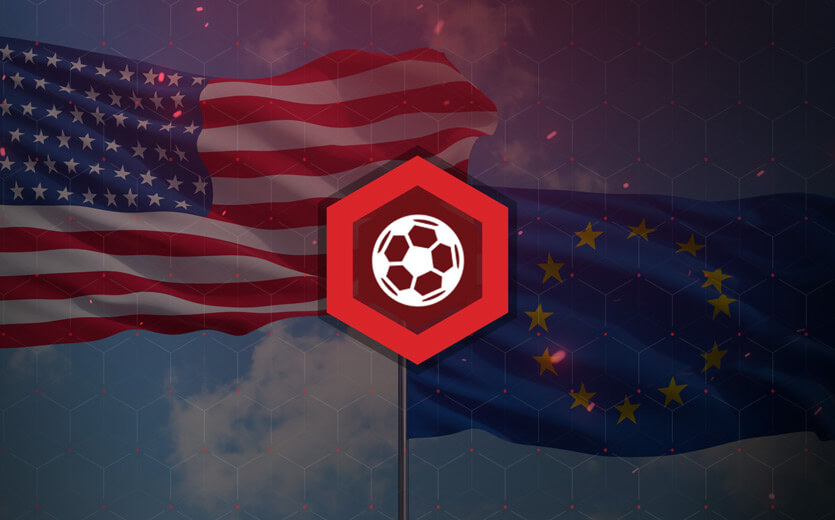 As a sport played in so many countries around the world, the format of how soccer is played varies from country to country.

If you’re familiar with betting on some of the top European soccer leagues, you’re off to a great start. However, if you’re looking to wager on the “beautiful game” right here in your own backyard, there are a few differences you should be aware of before you get started.

First, let’s take a look a few key differences between American and European soccer when it comes to betting.

MLS Fan and Betting Interest Is on the Rise

Interest in soccer in America has been steadily increasing, spurred by America’s biggest soccer league, Major League Soccer (MLS). It seems each season welcomes a new team to the league with more on the way and a waitlist of cities also hoping to join MLS.

Not only is the interest in the game growing, but also the interest in soccer betting itself. The new surge in popularity could be attributed to the fact that scoring in MLS has been on the rise and has been ranking as one of the higher-scoring soccer leagues around the globe.

With preseason starting early in the year and the regular season beginning in March, the MLS regular season is in full swing as the major European Leagues are winding down in May.

As you get ready to bet on the Major League Soccer season, it’s important to know how the league operates. You may be asking yourself why is MLS different from European soccer leagues? What insights can you take from betting on European soccer and apply them to American soccer?

Much like the majority of American sports, MLS is comprised of teams from both the United States and Canada. This is different from the rest of the world, where each country has its own league. However, for American sports bettors, this is no different than leagues like the NHL, NBA, or MLB. A similar betting experience to the US also applies to the Great White North with online sports betting in Canada on single games now legal in the country.

A Key Consideration for MLS Betting: Travel and Conferences

Also similar to other American sports leagues, MLS is divided into two conferences; an Eastern Conference and a Western Conference. This is to alleviate some of the long travel between different cities.

New players to MLS often struggle to adapt to the long travel and varying climates across North America. For instance, a team could be playing at home in sunny California one week, but then be forced to travel across the country or continent to a colder climate team like Minnesota or Toronto. While some fields are indoors, outdoor fields in places like Dallas and Houston may require game stoppages for hydration breaks during periods of extreme heat. Then there’s the Colorado Rapids whose home games in Commerce City are played at an elevation of 5,164 feet, which presents a whole other challenge of its own.

In the case of New York City FC, they play their home games at Yankee Stadium on a field that is much smaller than the standard field size. The less space and extra congestion of players creates a completely different and unique style of play for their home matches.

Most bookmakers will simply offer an outrights market on which team will win the MLS Cup. Because MLS teams are subject to a salary cap and with so many teams qualifying for the playoffs, it’s important to follow futures odds closely. Over the course of a season, hot and cold streaks can see odds quickly shorten or drop as teams compete for playoff positioning.

The salary cap also creates a level of parity between teams not seen in other leagues. However, several mechanisms are in place to allow teams to spend additional funds. Each team may sign up to three Designated Players (DPs) who do not count against the salary cap. General Allocation Money (GAM) and Targeted Allocation Money (TAM) are also available to clubs to assist in building their teams.

The major European leagues’ seasons come to a close right around May and June, leaving a short offseason during the summer months. Big name stars often use this break as a prime opportunity to join MLS during the summer transfer window and shake up the playoffs.

Unlike in major European leagues where the team with the most points at the end of the regular season is declared the winner, in MLS the top overall team for the year is decided through a playoff format, similar to other American sports.

The team with the most points at the end of the regular season will be Supporters’ Shield winners (a trophy named after the fans or “supporters” in soccer). You typically can not bet on the Shield winner, but instead can bet on which team will win the MLS Cup at the conclusion of the MLS Cup Playoffs.

A fixed-bracket single-elimination style playoff format hosted by higher seeds takes place for each conference until one team from each conference remains. The highest overall seed remaining from the regular season between the winner of the East and West will host the one-game MLS Cup Final.

We’ve discussed how promotion and relegation work in other countries, however, this is not a format that has been adopted in MLS.

In MLS, there is no punishment for finishing at the bottom the league, unlike other countries where the lowest teams at the end of the regular season are relegated to a lower league and the top teams from that lower league are brought up.

Because of this, once a team falls too far out of playoff contention, there may be much less desire to compete at the same level as the final weeks wear on. Be sure to follow these teams closely before placing a wager to gauge their interest in the match and to see what their lineup will look like.

Of course, this is no different than other American sports, so if you’re new to soccer betting you won’t notice a difference here. Instead, MLS is still in expansion mode and more teams are joining almost every season.

Just like in other soccer leagues, the MLS regular season is hardly the only competition MLS teams need to contend with on a week-to-week basis. The North American edition of the Champions League is a 16-team tournament called the CONCACAF Champions League (CCL). The tournament is comprised of the top teams from North America, Central America, and the Caribbean. It begins in mid-February and runs until early May.

If your sportsbook offers futures wagering on CCL, note that Mexican teams from Liga MX have traditionally held the upper hand over MLS sides. For starters, Liga MX is a strong league in its own right, but Mexican teams have the advantage of already being in mid-season form as their regular season begins in July of the previous year. Whereas when the tournament starts in February, MLS teams have only recently begun preseason. MLS teams may still be getting used to a new coach or new players that were brought in during the offseason and are not quite at their peak yet.

Before you go all-in on an MLS team, consider that as of 2019, a Mexican team has won the tournament every single year in the entire history of the CCL.

Each of these other competitions run throughout the MLS regular season, just as the Champions League, Europa League, FA Cup, Coppa Italia, and others would run during the European seasons.

These competitions are comprised of teams not only from the MLS, but also from multiple lower leagues and amateur divisions. Be sure to check your sportsbook for additional betting opportunities on some of these lower leagues.

Ready to Bet on Your Local Team?

If waking up at 7:00 am EST on Saturday morning to bet the English Premier League isn’t your cup of tea, then Major League Soccer is definitely for you. With games played all over the United States and Canada, the timing of games will be much more to your liking. Over 20 of the league’s teams reside in the US so there’s a very good chance you’ll be able to find a game to bet on taking place soon. Plus we’ve got you covered if you need to brush up on the basics of soccer betting before you lay that wager.

Now that you know how MLS is different from European soccer leagues, you’re ready to find out more about how to bet soccer in our How to Bet on Sports guide.