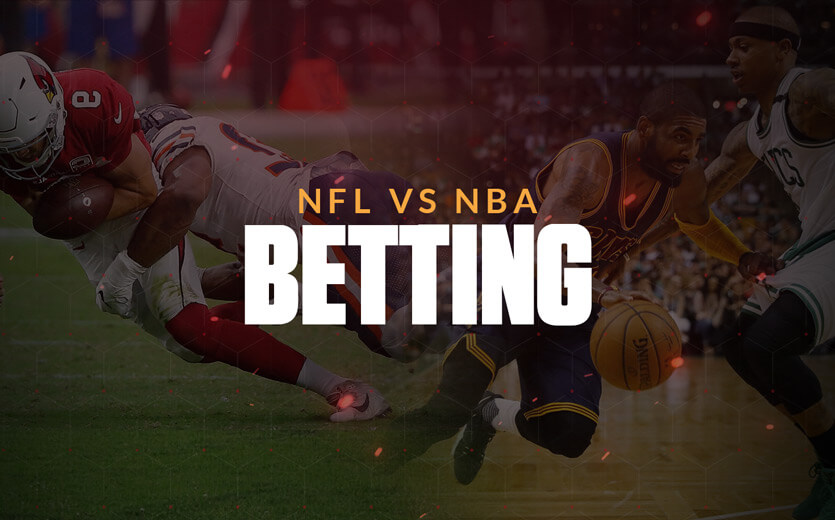 NBA vs. NFL games may be entirely different experiences to watch, but most sportsbooks treat the NBA and NFL in a relatively similar fashion. They allow bettors to lay wagers on spreads, moneylines, and totals in both sports and even have a similar array of prop bets and alternative lines. As such, many amateur bettors employ the exact same strategies when switching between the two.

It’s an easy trap to fall into, and it can get you burned. Although NBA versus NFL games look similar on the betting slip, professional basketball and professional football are two very different sports with drastically different rules, schedules, and point totals.

Before you make your next wager, take a moment to brush up on the key differences between betting on the NBA and NFL with this helpful primer.

It’s fitting that traveling is a penalty in the NBA (nominally, anyway) because it’s also one of the major drawbacks to being an NBA player. NBA teams play 41 road games per season and are often on the road for a week at a time. By contrast, NFL teams play just eight road games per season, and they have the luxury of returning home between games to rest and recuperate. They even receive one bye week per season to further aid their recovery.

The discrepancy in travel between the two leagues becomes even clearer when you examine the overall number of miles NBA and NFL teams must travel to reach their games throughout the season. The Oakland Raiders will travel more than any other NFL team during the 2019 season, racking up 32,023 miles. The Golden State Warriors travelled 51,170 miles in 2017-2018, despite the fact that their stadiums were located across the street from one another during these time periods.

All of those miles across all of those time zones can take their toll on players. Studies have shown that excessive travel adversely affects reaction time, wreaks havoc on circadian rhythms, and even lowers testosterone levels. It’s the reason why so-called “scheduled losses” are so common in the NBA, and why teams are increasingly turning to sleep doctors to ensure their players get adequate rest.

Bettors have to consider the role of player fatigue far more carefully when making bets on the NBA than the NFL. That means examining schedules, taking mileage into consideration, and looking at whether road teams are just embarking on a trip (when they should still be fresh) or wrapping one up.

Unlike NFL teams, which typically only play once a week, NBA teams generally play three to four games per week and average 14.4 back-to-back games per season. The NBA has begun making a concerted effort not to overtax its players physically, but the reality is that the NBA schedule is far more of a grind than the NFL schedule. It can also be far more challenging for bettors as well.

Online NFL betting sites tend to post their lines the Sunday before the game in question, giving bettors six days to consider matchups, examine lines, consult injury reports, and read dozens of articles about each game. By comparison, NBA bettors generally only have one to two days.

Due to the rapid turnaround in the NBA, there is less in-depth analysis available for each game. To be fair, bettors aren’t going into the game blind, but they don’t have access to the same wealth of data and insight available to fans of the NFL. That puts them at a disadvantage and, in many cases, results in impulsive bets.

One Player Can Make a Huge Difference in the NBA

NFL players are relegated to either offense or defense, while basketball requires players to excel in both. As a result, one NBA player can have a much bigger impact on the outcome of the game than one NFL player. Elite QBs or star running backs can certainly have an outsized influence on their team’s success, but it’s virtually impossible for an NFL team to succeed without a full-team effort.. Bettors should factor in each player’s value when considering the impact of injuries, suspensions and individual match-ups in the NBA.

Still not convinced one player can make a bigger difference in the NBA versus the NFL? Just look at LeBron James. The 15-time All-Star is so good that he’s been to the NBA Finals seven consecutive times, even though he’s played for two different teams. As impressive as his streak is, it’s not even an NBA record.

Boston Celtics big-man Bill Russell guided his team to ten consecutive NBA Finals and won 11 championships in his 13 seasons. That kind of sustained excellence is unheard of in the NFL. Aside from Tom Brady, no player has appeared in more than three straight Super Bowls.

Parity Rules the Day in the NFL

One of the guiding principles of the NFL is that any team can win any given game. Fans sum this up as “Any given Sunday” and it’s just as true for regular-season games as it is for the Super Bowl. No NFL team has won more than six championships since 1967.

By contrast, the Boston Celtics and Los Angeles Lakers have combined for 33 championships and have appeared in 51 NBA Finals in the last 68 years. That’s a staggering amount of consistency.

The NFL’s parity is great for keeping fans engaged across the league, but it can be hard on bettors as they struggle to project who will come out on top each week.

In the NBA, you can select a higher point total without a significant drop in odds since so many points are scored. That’s not the case with the NFL.

That discrepancy really comes into play for bettors when selecting alternative game totals and alternative game spreads. When visiting NBA betting sites, you can select a slightly higher point total without a significant drop in odds since so many points are scored. That’s not the case with the NFL, where increasing your total by even the smallest of margins can considerably lower your payout.

By contrast, let’s say you want to bet on the Pittsburgh Steelers vs. the Indianapolis Colts. The point total is listed at 45.0 and the odds are -110. If you decide to adjust the total by two points to 47.0, your odds will change to +120 if you bet the over, and -163 if you bet the under. Those differences become even more pronounced with every single adjustment since points are far harder to come by in the NFL than in the NBA. Of course, this discrepancy reflects the fact that each point you buy or lay on an NFL betting line is worth significantly more in helping you to adjust the implied probability to match your prediction.

In football, the lines typically come out on Sunday night or Monday morning and the games are then played six days later. Sportsbooks have a chance to adjust the lines throughout the week depending on the volume of action placed on each side and any key injuries or suspensions that may affect the final outcome.

By contrast, NBA lines are typically not available until the day before the game or on game day itself. As a result, sportsbooks are much less inclined to adjust the line after it’s been set. That gives basketball bettors a tremendous advantage if they see a line they like or feel that one team is being drastically under or overvalued.

Get Started with NBA & NFL Betting

Remember to bet always bet within your limits, and enjoy the action this season.