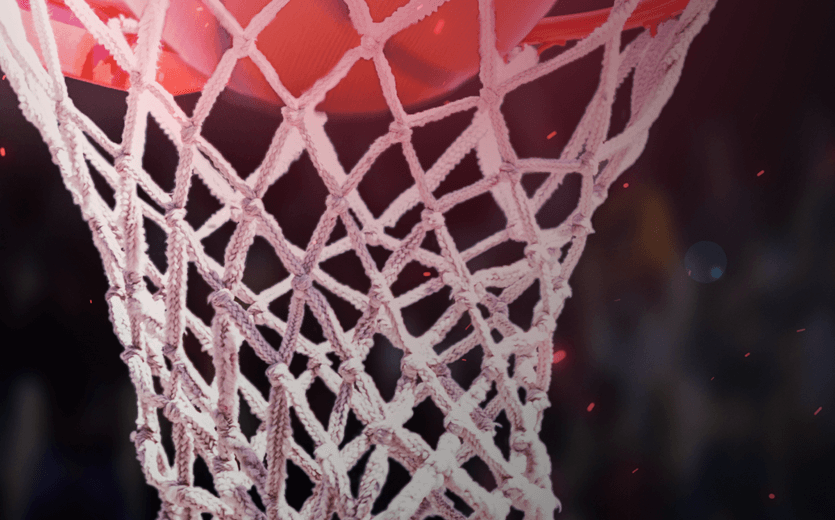 NCAA Division I men’s and women’s basketball each have their own 10-member selection committee responsible for selecting, seeding, and bracketing teams for the championship tournament. There is a lot of debate and voting involved.

To assist in making these decisions, the NCAA created the NCAA Evaluation Tool (NET ranking system) in 2018, replacing the outdated Rating Percentage Index (RPI) system with a more sophisticated metric.

What exactly are NET rankings? Read on for a complete overview of the NCAA Evaluation Tool, including its role in seeding March Madness. Plus, learn how you can use it to compare teams when betting on college basketball.

The NCAA Evaluation Tool is a ranking system for men’s and women’s college basketball teams, developed in partnership with the NCAA and Google Cloud.

The NET uses a highly sophisticated algorithm the NCAA doesn’t share. However, NET rankings are adjusted daily during the college basketball season and displayed publicly on NCAA.com and NCAA.org.

The NET is one of the sorting tools used by the selection committees to determine which teams receive at-large bids for March Madness. We wish we could say that NET rankings alone determined tournament seeding, but it’s not that simple. The NET is not designed to select and seed teams for the committee.

Remember, teams that win their conference tournaments automatically qualify for the NCAA tournament. The remaining tournament bids are given to teams who the selection committee considers the best in the country. Many of them will have high NET rankings, but that isn’t a perfect predictor of a team making the tournament, nor is it necessarily an indication of how teams will be seeded. There will be teams left out with good NET rankings and others that squeak in with relatively poor rankings.

Prior to adopting the NET ranking system, the NCAA had utilized the Rating Percentage Index, or RPI, since 1981.

Widely criticized for not accounting for a teams’ margin of victory, the RPI was calculated based on winning percentage, strength of schedule, and opponents’ strength of schedule. In theory, RPI punished teams for playing weaker opponents, which isn’t entirely in the realm of control for teams in weaker conferences.

As an attempt to overcome the shortfalls of the RPI, the NET considers multiple other factors. We’ll share as much info as we can about each of these in the next sections.

How Are NET Rankings Calculated?

The NCAA does not publicly share the exact formula it uses to calculate NET rankings. In fact, there is almost no part of the NET that can be calculated or reverse engineered. The proprietary algorithm is a tightly kept secret, but here’s what we do know: the NET has two main components – adjusted net efficiency and the team value index. 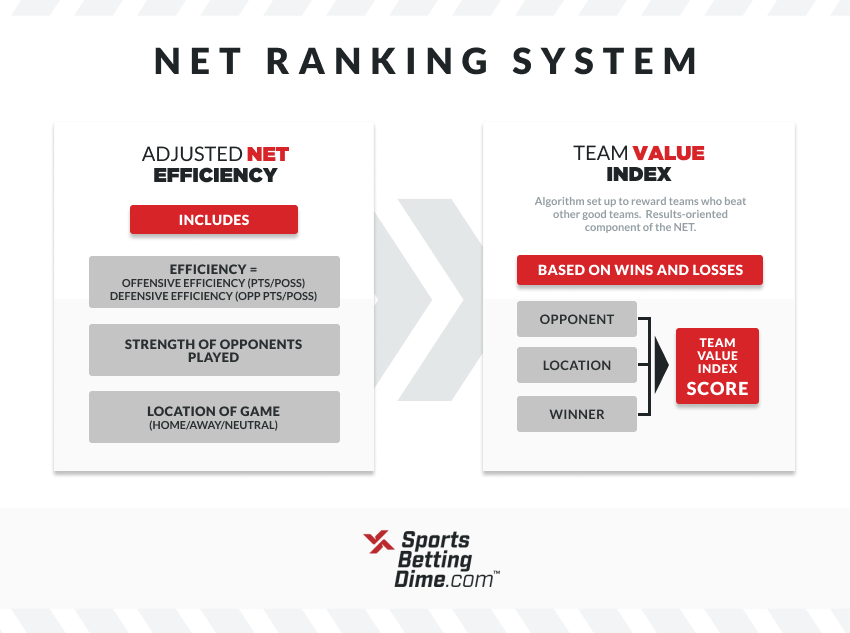 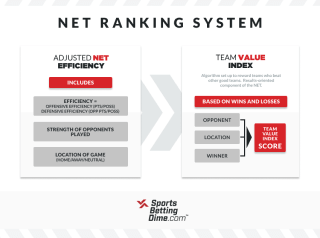 The NCAA dropped three other components of the original NET formula before the 2020-2021 college basketball season. The new NET algorithm no longer uses winning percentage, adjusted winning percentage, and scoring margin. The NCAA confirmed it does not anticipate any further adjustments in the formula for several years.

Let’s explore the remaining factors in as much detail as possible with the limited information provided. 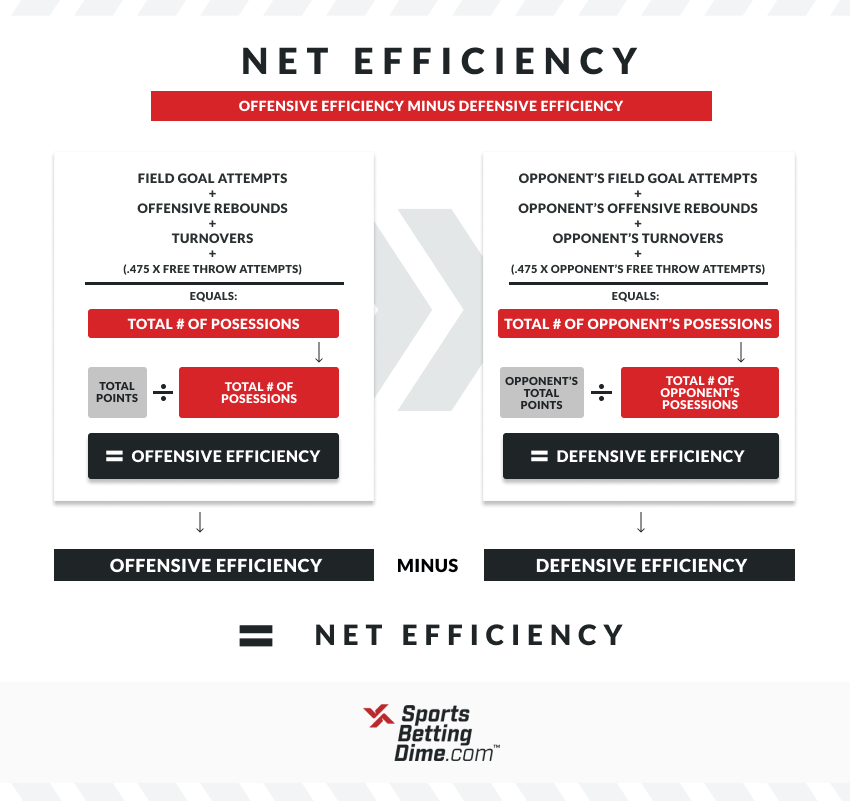 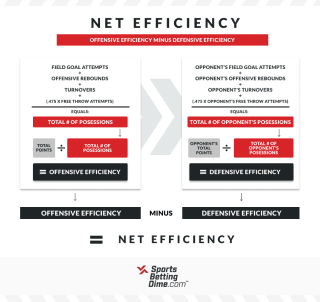 To find adjusted net efficiency, the NCAA tweaks the above calculation to account for strength of opponent and game location – home, away, or neutral– across all games played.

Exactly how the algorithm calculates this adjustment is somewhat of a mystery. The important thing to remember is that a given net efficiency value – say, 8.2 points per 100 possessions – rates higher against stronger competition than the same efficiency against weaker opponents. Equally, having a certain efficiency when playing on the road rates higher than accomplishing that same efficiency at home.

Adjusted net efficiency is now the most heavily weighted part of the NET formula, so running up the score can have a significant effect on NET rankings.

The Team Value Index (TVI) is the other “results-oriented” element of the NET. It’s designed to reward teams for beating other good teams.

The Team Value Index only considers games against Division I opponents and is based on results. The algorithm factors in the opponent, location, and winner to produce a TVI score. Again, little information is shared about how TVI is actually calculated.

Interestingly, strength of schedule is in some way part of both adjusted net efficiency and the Team Value Index, but its exact impact on each component is – you guessed it – a secret.

What About the Quadrant System?

Hoops diehards are probably wondering if the so-called Quadrant System is still in play with NET rankings. The NCAA still utilizes the Quadrant System for March Madness tournament selections and seeding. Essentially, at the end of the season, the NET sorts games into tiers, from Quadrant 1 at the top through Quadrant 4.

The men’s and women’s Quadrant Systems differ slightly in that the men’s uses a weighted system to account for home, neutral site, and road games. The women’s system doesn’t differentiate based on where games are played and simply sorts teams into four quadrants based on NET ranking: Quad 1 (NET 1-25), Quad 2 (NET 26-50), Quad 3 (NET 51-100), and Quad 4 (NET 101+).

Here’s a quick overview of the Division I men’s basketball Quadrant System, with the corresponding NET rankings for each quadrant displayed by location:

Quad 1 wins make the biggest headlines, as they come against the highest caliber opponents. On the other end of the spectrum, Quad 4 games are the easiest on the schedule. A loss here could have devasting consequences for a team’s tournament aspirations.

When looking at NCAA rankings, each team’s record will display its overall record, home record, away record, and neutral record, as well as its record in each of the four quadrants. Note that game results can shift between quadrants throughout the season depending on fluctuations of an opponent’s NET ranking.

How to Use NET Rankings to Compare Teams

There are 350 schools in Division I men’s college basketball and 354 in Division I women’s basketball. Part of what makes March Madness so chaotic is most teams must face opponents from outside of their conferences.

There is simply no perfect way to compare two teams that may not have played each other before or even shared any common opponents in a given season.

That said, NET rankings can provide some valuable insights for basketball bettors. Because the NET system rewards teams for beating quality opponents and considers adjusted net efficiency, NET rankings should give you some sense of how a team performs against other top competition.

Sometimes, a team will have a much lower seeding than their NET ranking would imply, as was the case for both Loyola Chicago and Colgate in the 2021 NCAA men’s tournament and Oregon in the women’s tournament. The NCAA doesn’t provide any explanations for this, but an educated guess would be that such teams either played too many Quad 4 games or not enough Quad 1 games, or struggled in their recent performances.

A Word of Warning

Bracketology is complicated, as much an art as a science. Exactly how the NCAA utilizes its own evaluation tools and team sheets is convoluted and vague, perhaps even intentionally so.

The NET is a complex analytical model, but it’s still just one part of the picture. Tournament seedings are not solely decided based on NET ranking.

Interestingly, in 2021, the top four teams in the NET rankings (Gonzaga, Baylor, Illinois, and Michigan) all received a #1 seed from the men’s basketball committee. On the women’s side, only three of the top four squads in the NET rankings received a #1 seed – Stanford, UConn, and South Carolina. The Baylor Lady Bears were relegated to a #2 seed, with NC State receiving the final top seed.

While the NET is a useful predictive metric, we must remind bettors that no single metric can perfectly foresee every outcome – that’s why we have to play the games.

Similarly, despite spending millions on developing algorithms, the March Madness selection committee is ultimately still a human committee, and thus a flawed one. For all its high talk of “amateurism” when discussing its athletes, the NCAA is still run like a business. March Madness brings in over a billion dollars of revenue every year, and one has to wonder what impact that has on tournament selection.

Even with sophisticated ranking systems in play, college basketball can still be unpredictable. That’s all part of the fun.

Be sure to check out our “How to Bet on Sports” section for more NCAA basketball betting advice. We provide all the information you need to make confident wagers and fill out your March Madness brackets.