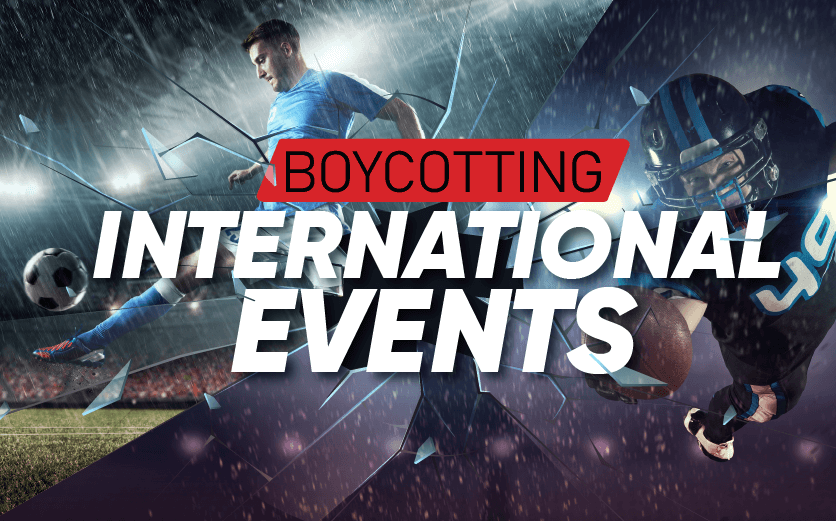 How Do Political and Social Issues Influence Sports?

Political protests have occurred in one form or another in various sports over the last few years. In 2016, NFL player Colin Kaepernick got on one knee during the national anthem to protest police brutality. This inspired many other athletes to follow along despite league rules and backlash. In 2020, NBA players took action with athletes speaking out against racism and police brutality after the deaths of George Floyd and Breonna Taylor. As a result, the NBA allowed players to customize their jersey names and branded courts with “Black Lives Matter.”

The continued spotlight on human rights issues brings us to the potential boycotting of the 2022 Winter Olympics in China and the 2022 FIFA World Cup in Qatar. Regarding the boycotting of the Olympics, China has been accused by the U.S. and various other countries of committing crimes against humanity, including the genocide of the Uyghur population and other mostly Muslim ethnic groups. The FIFA World Cup is also at risk of being boycotted. According to investigations, more than 6,500 migrant workers involved in construction for the event have died in Qatar since it won the right to host the World Cup. The country has also been accused of bribing FIFA for the right to host.

In order to understand more about international sports boycotting, we asked 1,002 sports fans for their opinion. Read on to find out what they think.

Protesting during American sporting events is one thing. But what are sports fans’ stances on boycotting international events? 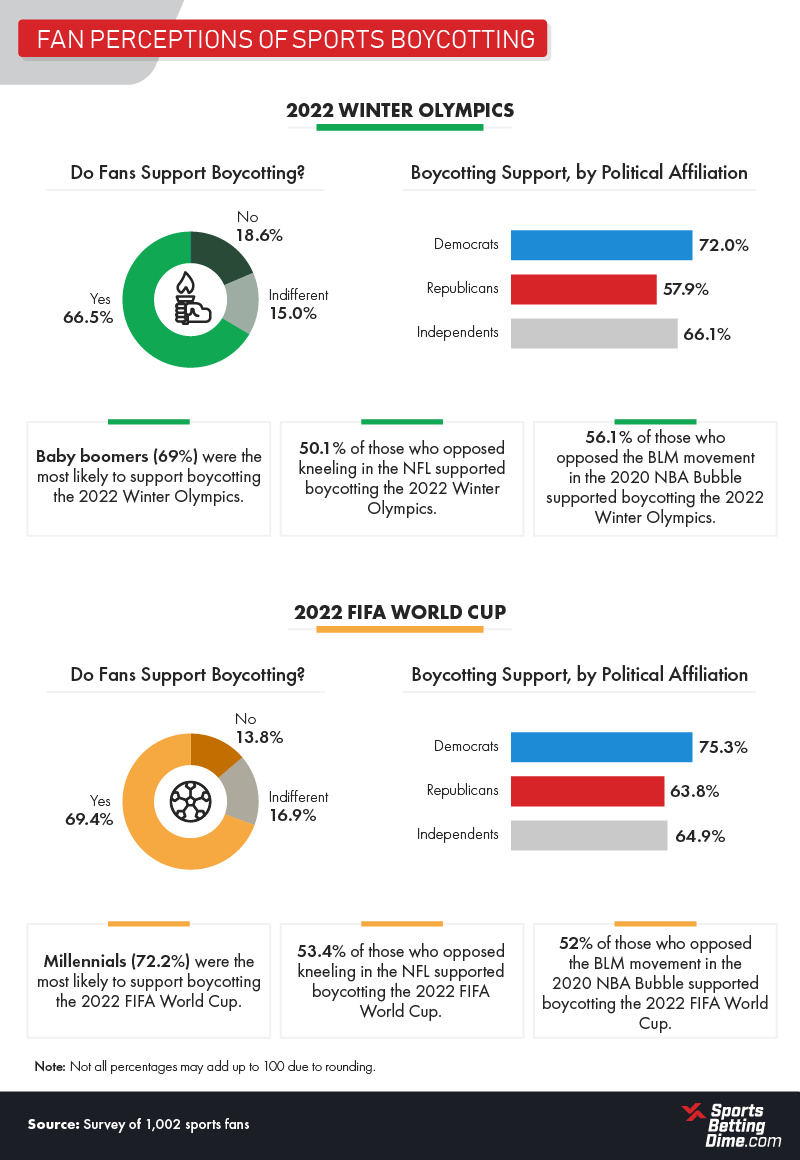 For the Winter Olympics, 66.5% of sports fans were in support of boycotting. Baby boomers were the generation that most strongly supported a potential boycott (69%), suggesting that they care more about the associated political issues than younger generations. In terms of political affiliation, Democrats were the biggest supporters of boycotting (72%).

Similar opinions applied to the World Cup, with 69.4% of sports fans in favor of boycotting. Democrats remained the political group most supportive of a boycott (75.3%), but in this case, millennials were the age group most likely to approve boycotting (72.2%). This statistic is very telling, given the fact that World Cup fandom worldwide, based on the last world cup in 2018, is relatively young (29% of viewers were considered generation z, and 30% of viewers were considered millennials).

The results also show that approximately 50% of fans who opposed kneeling in the NFL and the NBA athlete’s BLM movement are now in support of boycotting the 2022 Olympics and the FIFA World Cup. This infers that while fans may oppose national sports protests, they seem more supportive of international ones. Perhaps these fans perceive protest against American police brutality/racism as unpatriotic but do not feel or experience the same conflict of loyalties when criticizing the actions of foreign governments.

Despite various attempts to separate politics and sport, the majority of fans seem unable to do so. The types of boycotting that are considered appropriate are still up for debate, however. We asked fans for their opinions on forms of large-scale protest to find out more. 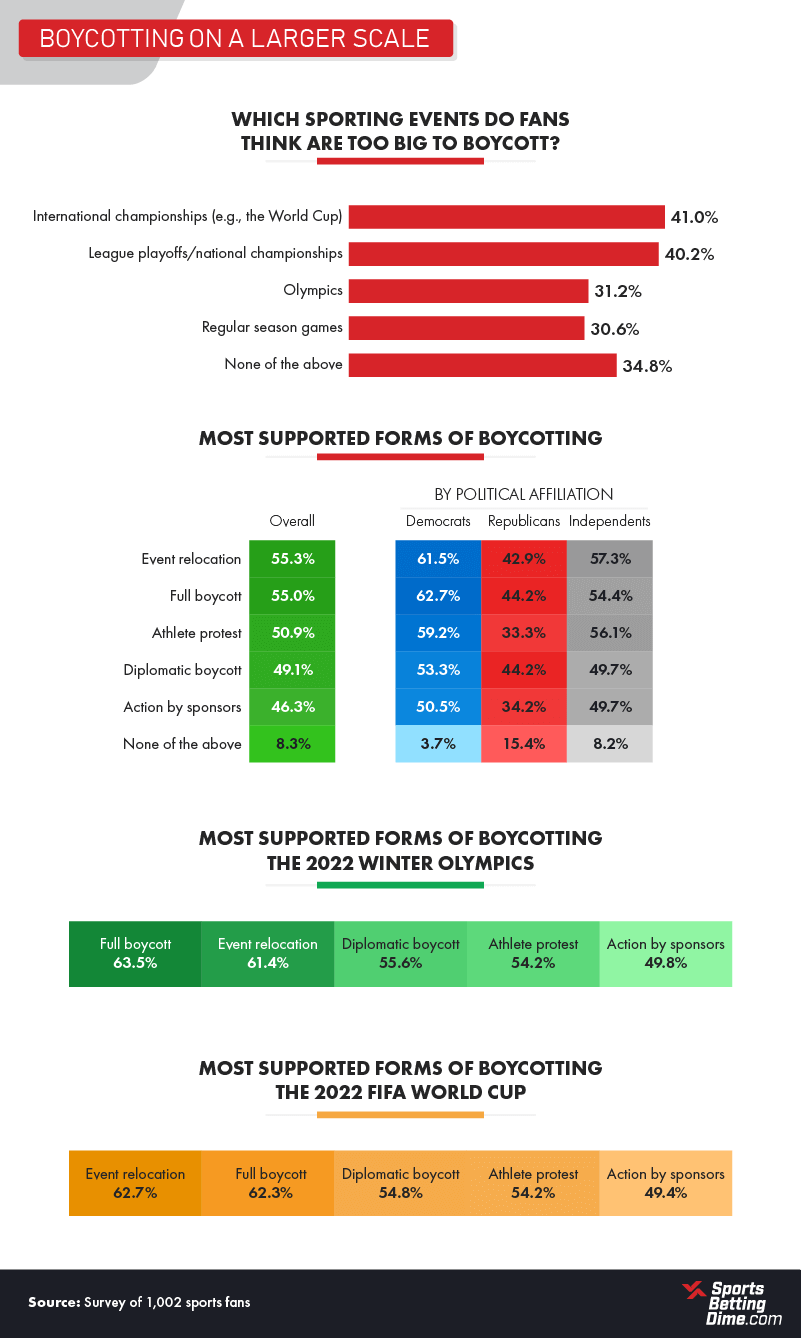 Nearly 35% of sports fans believed there’s no such thing as a sporting event too big to boycott. In fact, international championships were seen as too large to boycott by just 41% of people. The Olympics were considered only slightly less appropriate to protest against than regular-season games, with just 31.2% of fans believing them too big to boycott.

However, there were significant differences in the type of boycotting preferred. For most forms of boycotting suggested, Democrat-leaning fans were between 16 and 25 percentage points more supportive than Republicans. Nevertheless, a full boycott was the most popular form of protest for both Democrats and Republicans, while independents were most supportive of event relocation. Republican respondents were the most likely not to support boycotting at all, with 15.4% replying “none of the above.”

In terms of the 2022 Winter Olympics, fans were most in favor of a full boycott (63.5%), followed by event relocation (61.4%). For the 2022 FIFA World Cup, event relocation was the preferred option (62.7%). Perhaps World Cup fans care more about being able to enjoy the event in a different location rather than missing out completely? This is supported by the fact that in 2018, the Pyeongchang Winter Olympics attracted a global TV audience of 1.92 billion, in comparison to the 3.5 billion who tuned in for the FIFA World Cup in Russia.

Why Are Boycotts Right … or Wrong?

The debate on whether politics should be left out of international sports is both long-standing and confusing. The next section of our study examines the social and political triggers for boycotting, when boycotting should occur, and to what extent. 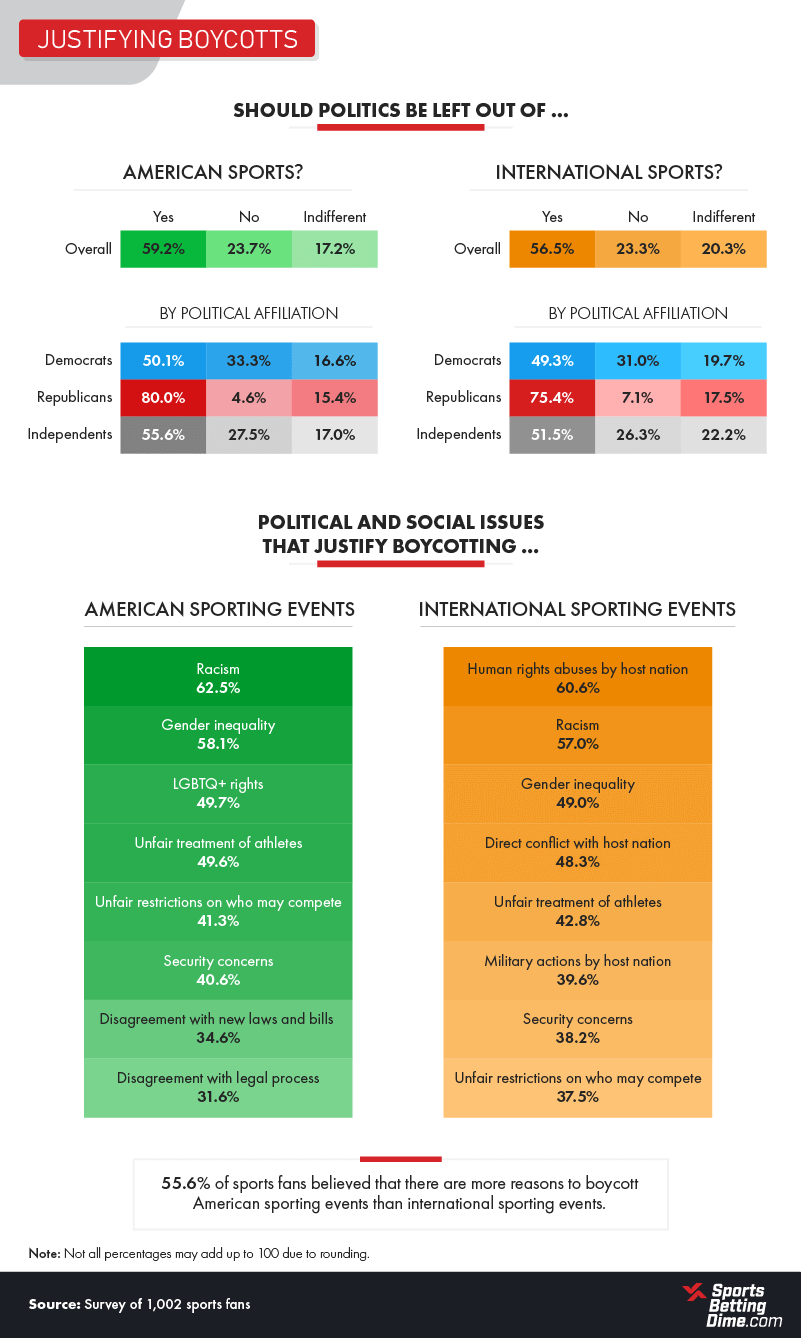 For both American and international sports, more than half of fans across all political affiliations agreed that politics should be left out of sports (59.2% and 56.5%, respectively). However, Republicans made up for most of these percentages, showing more support than Democrats for depoliticizing sporting events by approximately 30 percentage points. With similar percentage profiles for both American and international sports, it seems that fans have mixed feelings on these issues on both a national and a global scale.

Interestingly, almost 56% of sports fans believed that there are more reasons to boycott American sporting events than international ones. Perhaps this is due to the fact that issues like racism, gender inequality, and LGBTQ+ rights are more likely to have personal relevance to American sports fans than human rights abuses or military actions in a foreign country.

As mentioned, various athletes in the NFL and NBA have protested about current political issues. We decided to examine the extent to which fans believe athletes should speak out about political and social issues, along with which sports and sports leagues have the most athlete activists.

Overall, the majority of fans agreed that athletes should use their platform to speak out about social issues (75.4%). There was much more controversy about whether athletes should be involved in politics. Republicans were the most divided on this issue, with 44.2% agreeing that they should and 38.8% saying that they shouldn’t. Independents erred more on the Republican side of the situation, with 25% opting for limiting the political involvement of athletes versus the 9.5% of Democrats who said the same.

The sports with the most socially and politically involved fans were golf, action sports, hockey, tennis, and soccer. With the majority of these sports featured in the Olympics, and soccer at the heart of the World Cup, it can be reasoned that these fans care about the political issues currently affecting these events. The NBA and NFL are the most socially and politically involved sports leagues, which explains their level of activism in recent years.

With more athletes taking a stance on political and social issues, we wanted to establish where (or rather, who) these initiatives are coming from. This section examines who these athletes are and the amount of support they receive. 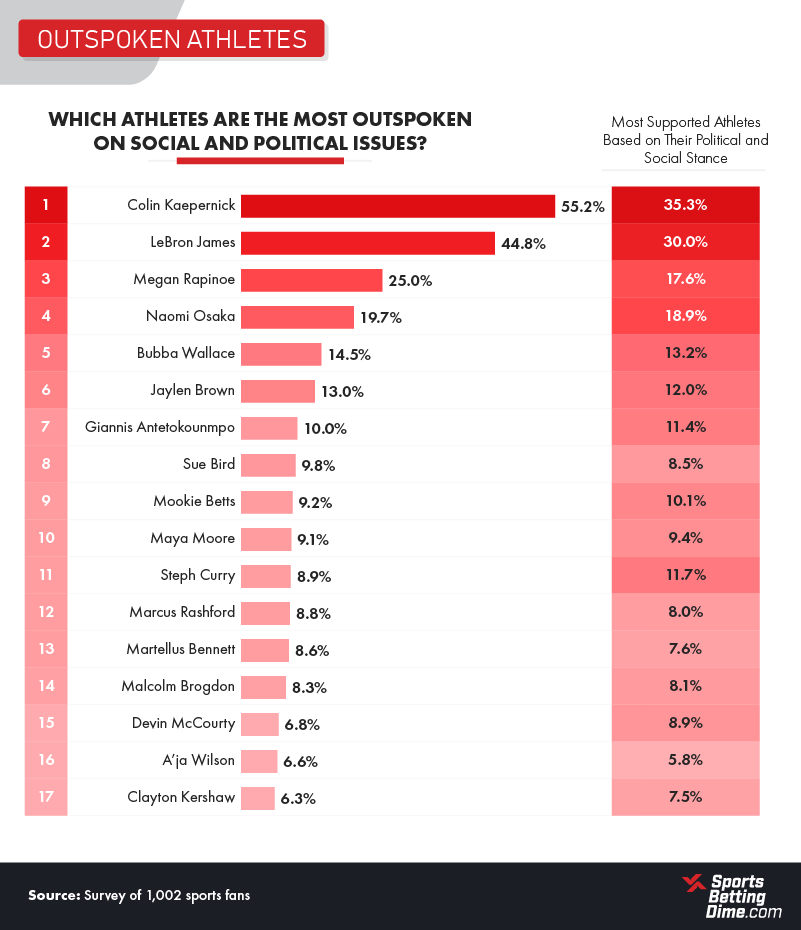 The top three most outspoken athletes were Colin Kaepernick, LeBron James, and Megan Rapinoe. As previously mentioned, taking the knee as a form of protest began with Kaepernick in 2016, while James is well known for supporting the Black Lives Matter movement from within the NBA. Perhaps because of the strength of their convictions and their presence on social media, Kaepernick (35.3%) and James (30%) are also the athletes most supported by sports fans for their social and political stances. Soccer star Megan Rapinoe is renowned for her promotion of gender equality and LGBTQ+ rights, among other issues, and received a 17.6% support rating as a result.

Despite ranking below Rapinoe in terms of the most outspoken athletes, tennis player Naomi Osaka has a slightly higher support rating (18.9%), perhaps for her bravery in withdrawing from the French Open due to mental health issues.

The Boycott Movement Is Real

As we have observed, the potential boycotting of the 2022 Winter Olympics and FIFA World Cup is likely due to the influence of recent events and a shift in attitude toward justifying protest action in sports. Most fans are in agreement that boycotting is an appropriate response to the human rights crises in both China and Qatar.

There is no way to tell exactly what will happen in 2022. But something you can get more insight on right now is who to put your money on. SportsBettingDime.com puts you in control of your sports betting decisions by providing you with all the necessary information. Whatever tools you need to come out on top of the bet, SportsBettingDime.com is here to support you.

For this study, we surveyed 1,002 sports fans about boycotting international sporting events. Of the respondents surveyed, 59.1% identified as men, 40.3% identified as women, and 0.6% identified as nonbinary. Additionally, the average age of respondents was 38.6 years old with a standard deviation of 11.7 years.

The primary limitation of this study is self-reporting on the survey, which can lead to multiple issues, including exaggerated answers, misunderstood responses, and recency bias.

In this study, we explored the most up-to-date intersection between sports and politics. If you think another sports fan or fellow student-athlete would like to know more about the fate of future sporting events, you are welcome to share our findings for noncommercial purposes by including a link back to this page.