The D’Alembert Betting System – Don’t Bet On It! 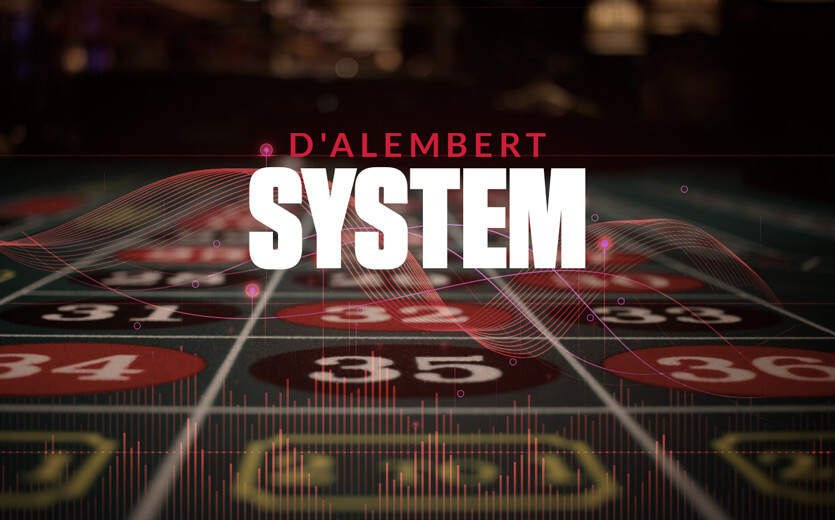 The D’Alembert system is a very simple, but intensely flawed betting strategy. Below, we’ll explain how it’s supposed to work and the reasons why it doesn’t.

Origins of the D’Alembert System

“Mathematician” is in quotation marks because his calculations were a little off at times. His betting system, which applies to even-money propositions, calls for bettors to constantly increase the size of their wagers after losing.

D’Alembert reasoned that the likelihood of a 50/50 proposition, like a coin landing heads on the next toss, increases if the previous toss landed tails. For reasons that we’ll get to, it is a prime example of the “Gambler’s Fallacy.”

How Does the D’Alambert System Work?

Sticking with the coin-toss example, the D’Alembert system calls for bettors who lost on the previous coin toss to stick with their choice of heads and increase the size of their bet.

After losing, the [D’Alembert system] requires bettors to increase their next bet by one unit. So after losing a $10 bet on heads, the next bet should be $20 on heads.

In the event that a wager is a winner, the system requires the bettor to then decrease the next bet by one unit. So if the third bet ($30) was a winner, the fourth bet would go back down to $20.

Why Doesn’t the D’Alembert System Work?

At bottom, the D’Alembert system doesn’t work because every coin toss is an independent event. There is no causal relationship between one coin toss and the next. No matter what happens on the first toss, the next toss is still a 50/50 proposition. The coin is not more likely to land heads because the last one landed tails.

Why should sports bettors care about this?

It’s very easy to convince yourself that, because your last bet lost, your next bet is more likely to be a winner. In a vacuum, that’s just not true.

The easiest way to illustrate the flaws of the D’Alembert system in the context of sports betting is by applying it to betting against the spread (“ATS”) in the NFL.

[T]he likelihood of the home team covering on Monday Night Football is not any greater just because [the home team] failed to cover on SNF.

ATS betting generally turns every football game into a 50/50 proposition (or thereabouts). At the outset of every game, both teams have roughly a 50/50 chance of covering the spread.

Let’s say you bet on the Patriots -13 at home versus the Jets on Sunday Night Football. Somehow, Sam Darnold and the Jets sneak out a back-door cover. You’re understandably shook and eager to recoup your losses. You figure that, because the Patriots didn’t cover at home, the Saints probably will on Monday Night Football tomorrow.

But the likelihood of the home team covering on Monday Night Football is not any greater just because the Patriots failed to cover on SNF the day before. They are completely unrelated, just like the outcome of each coin toss.

As anyone who’s ever bet on sports for any length of time can tell you, losing streaks happen. We’re not talking about teams here, we mean bettors. Think if you lose ten straight bets. If you were using the D’Alembert system at the time and your starting unit was $10, you would have ended up with a $550 loss.

If you had then continued with the D’Alembert system, you would have to win five straight (3.13% probability) just to get back in the black.

Could It Ever Work?

There could be contexts in which the D’Alembert system actually does produce positive expected value. However, this would require two events to be dependent on one another (or, in other words, have a causal relationship).

If there is a mass of data that says a certain team is more likely to win when they are coming off a loss, betting on that team to win after a loss may have value. But this would depend on the odds you’re getting. If someone has figured that out, the chances are, so has the sportsbook which will have baked it into the line.

If you are eager to learn more about other betting systems, how they operate, and when they do/don’t make sense to use, head to our betting strategy section.