How Does Round Robin Betting Work for Sports Betting? 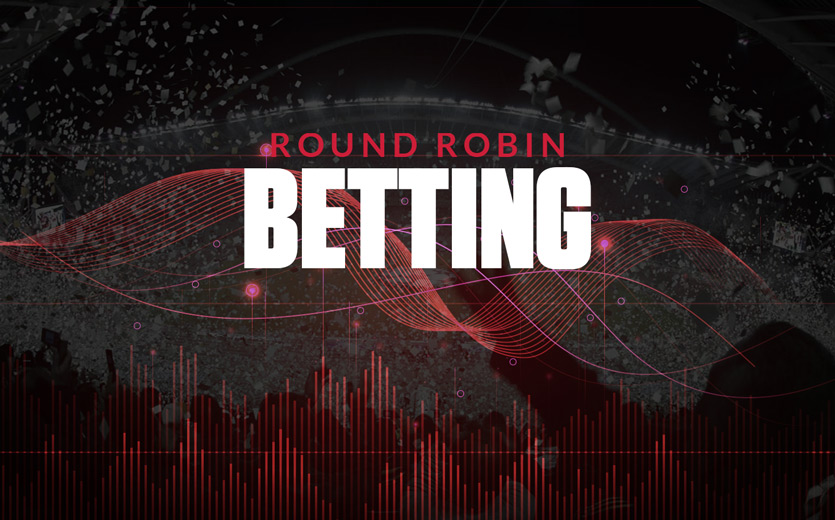 Round robin betting is a creative type of parlay betting that requires making multiple parlay bets at once. The name comes from round robin tournaments where each team in the tournament plays against each other at least once.

If there are a number of betting lines (moneyline bets, spread bets, totals bet, etc.) you want to bet on by constructing a parlay, you have two options:

Option 1 described above is a traditional parlay, while Option 2 is a round robin.

You’ll need to include at least three parlays in your round robin bet, but technically, there is no maximum. It all depends on the combinations you want to bet on, and the size of the parlays you wish to make.

Round robin betting will affect your payout, but it also increases your chances of success.

Round Robin Betting a Great Strategy?

As a hedge, round robin bets are an excellent way to minimize your losses without hurting your potential payout too much.

While the payouts associated with round robin bets are smaller than if one big parlay hits, you don’t have to worry about your parlay failing if you mis-predict the outcome of one event.

Round robin bets are an excellent way to minimize your losses without hurting your potential payout too much.

Think of round robin betting as a security policy that still has the massive payout of a parlay.

How to Construct a Round Robin Bet

Round robin bets require you to create at least three separate parlays with at least three different lines. This can be a tad confusing, so let’s break down an example.

Let’s say you really like the following three lines:

If you were going to construct one regular parlay, you’d need all three of these teams to cover the spread.

Round robin betting allows you to create a security policy – you remain profitable even if one leg of the parlay fails. Instead of creating a parlay where all three events would need to be successful to get a payout, you’d construct three different two-team parlays.

Round Robin Bets in Action

A round robin bet including these three events would look like this:

If the New York Rangers don’t cover the spread, your parlay involving the Brooklyn Nets and Dallas Cowboys (#1) will still be successful.

If only the Nets failed to cover the spread, parlay #2 (involving only the Cowboys and the Rangers) would be a winner.

If the Cowboys fail to cover the spread and both other events succeed, your parlay (#3) with the Nets and Rangers would net you some cash.

In a round robin bet, every parlay you construct is its own, independent event. Of course, it’s possible for all the parlays within your round robin bet to succeed. If this happens, you’ll get an even bigger payout!

Let’s do the math using the example listed above. If you constructed a round robin bet based on the three lines we liked (Nets, Rangers, and Cowboys), we’d have three different, two-team parlays.

A standard two-team parlay with both teams listed at (-110), would pay out at +260. Note: A +260 payout for a two-team parlay at standard -110 odds is standard across all the online sportsbooks we review.

Let’s say that you wager $5 on each of the three parlays. If everything goes ideally and all three teams covered, you win $39 in pure profit and receive all three $5 stakes back for a total return of $54.

If one event in your round robin bet failed, you’d still win $13 and get your $5 stake back. One successful parlay would return $18, including your $5 stake. Subtract the $10 you wagered on the other two parlays, and you’d walk away with an $8 profit.

You still break even with a round robin bet, even if one leg fails. Of course, if two teams do not cover, you will lose every parlay in your round robin bet.

Say that you bet the same $15 and created a single three-team parlay that featured the Nets, Rangers, and Cowboys covering the spread. If it was successful, you’d win $90. However, if an individual leg of your parlay failed, you’d lose your entire bet.

If you want some of the rewarding payouts that a parlay offers but still want some added security, round robin betting is a betting strategy to consider.

How Do You Make a Round Robin Bet?

The best sports betting sites generally have software that allows bettors to save time and automatically create round robin bets.

Simply choose which lines you’d like to include, click on the “round robin” option, select how many different ways to parlay (the number of legs within the parlay), and how much you want to bet. Your sportsbook will generate all the options you need to create a round robin bet based on these inputs.

Obviously, this can get fairly tedious relatively quickly. With so many different combinations, you’re prone to make a mistake. Accurate betting software eliminates the hassle that comes with creating immense round robin bets.

A word of advice: Always scrutinize the terms and conditions to find this information.

The “Number of Ways” Option

Selecting the “number of ways,” or parlay size, can be a bit confusing. If you’ve only chosen three lines, you can’t have a parlay size of over two lines.

However, if you were to choose four lines, you could either create a parlay that was two events or three events in size. Having selected four lines with a two-event parlay, there would be six total combinations you could construct.

“Number of Ways” Option in Action

Say the four lines you selected were all moneyline bets on NFL Sunday Football. You chose the Dallas Cowboys, New York Giants, Philadelphia Eagles, and Seattle Seahawks to win their games.

If you wanted to construct a two-event parlay, the six combinations would look as follows:

If you wanted to construct a three-event parlay with the four different moneylines, it would look as follows:

Round Robin Betting Is a Great Opportunity for Bettors

If you want the massive payouts of parlays (but are averse to their inherent riskiness), constructing a round robin bet is a wise move. When round robin betting is built into a betting strategy, you can achieve maximum ROI with minimal risk.