Is Two-Ball Betting in Golf a Good Strategy? 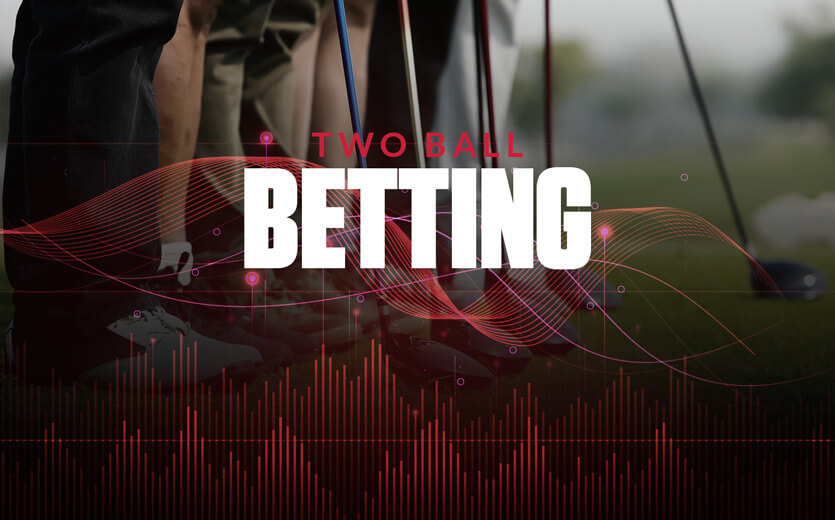 Believe it or not, golf is one of the most entertaining sports to wager on. Your action can last for as little as a few hours or as long as an entire four day tournament. As you learn about the different options, you might be asking yourself, “what is two-ball betting in golf, and is it a good strategy?”

While the allure of hitting a big pay day with an outright winner can be tempting, it’s a sure fire way to light your money on fire over the long run.

Even the best golfers in the world rarely win outright.  When they do, the odds typically aren’t long enough to justify the risk. If you understand the idea of variance in sports betting, you can understand why betting favorites as outright winners is actually a very risky long-term strategy.

If you’re trying to build a bankroll, you stand a much better chance of success by choosing a lower variance style of wager.

Two-ball betting is just that, and while you won’t get rich overnight, it offers bettors an increased chance at a consistent return.

What Is Two-Ball Betting?

Two-ball betting involves a head-to-head style wager. Instead of picking a single golfer to beat a field that can be as large as 156 players over four rounds, you bet on one golfer to shoot a lower score than the opponent he or she is matched up against over 18 holes.

In most cases, golfers play in groups of two or three players, and odds will be offered on some or all of those pairings. Some online sportsbooks also offer odds on ties between golfers, while others will simply void the bet if the players finish with the same score.

Is Two-Ball Betting a Good Overall Strategy for Golf?

It’s much easier to win a two-ball bet than it is to hit an outright winner.

Most professional golf tournaments consist of between 120 to 156 players, and trying to pick a winner from that big of a field at even a semi-consistent rate is next to impossible. By focusing all of your research on a smaller group of players, you have a much better chance of identifying if someone has a big advantage.

One thing to consider is that the vig, the amount of money the sportsbook receives for taking your bet, is higher in two-ball betting than it is for traditional match up bets against the spread.

As such, it’s wise to avoid two-ball bets where one player is a massive favorite over the other, unless you think the underdog is live to win. Golf is inherently a volatile sport, and laying -150 or worse over the long run is not a profitable strategy.

When Is It Best to Make This Type of Bet?

When it comes to golf betting, recent form is a key indicator of who is likely to play well in the immediate future.

Golfers are such a fickle breed that even the slightest hitch in their mechanics can set them back in a big way. Players losing strokes off the tee and on approach at an alarming rate for their pedigree are prime candidates to bet against.

The same goes for a golfer who isn’t striking the ball well, but is making up for it on the greens with a scorching hot putter. No stat in golf is more volatile than putting, and it’s not uncommon for a player to gain multiple strokes on the green one day, only to lose just as many on the next.

If you’re able to identify a two-ball bet between one player who is striking it pure, and another who is spraying it all around the course, it’s time to act.

What Strategies Should Be Used for Two-Ball Betting?

Anyone serious about making a profit from two-ball betting should understand which golf stats are the best indicators of future success. Ball striking is the most easily replicated skill, so you should weigh strokes gained off the tee, on approach, and tee-to-green much higher than putting.

It’s also important to realize which type of golfers suit the style of course at hand. Some courses favor precision and accuracy, while others leave more room for error but require increased power.

Pay close attention to each player’s course history whenever you wager on golf. It’s not uncommon for a player to play well year after year on one track, and consistently struggle on another.

Once you understand what to look for, it’s much easier to identify the best plays and which two-ball bets offer the most value. Some bettors like to spread their action across multiple wagers, while others choose to attack only the two-ball bets they feel are undervalued. There’s no right or wrong way to do it.

Two-ball bets offer better odds and a greater chance of cashing regular tickets than any other type of golf wager. Now that you understand how it works, it’s time to take the plunge into golf betting.

For more strategic betting advice for golf and other sports, check out the rest of the articles in our sports betting strategy section.

As SBD's resident Swiss Army Knife, Chris covers virtually every sport including NFL, PGA, NBA, MLB, NCAAB, NCAAF and the Olympics. A true grinder, he'd rather pick off small edges in the player props market than swing for the fences with a 5-leg parlay.

As SBD's resident Swiss Army Knife, Chris covers virtually every sport including NFL, PGA, NBA, MLB, NCAAB, NCAAF and the Olympics. A true grinder, he'd rather pick off small edges in the player props market than swing for the fences with a 5-leg parlay.