How Will the Zig-Zag Theory Affect My Sports Bets? 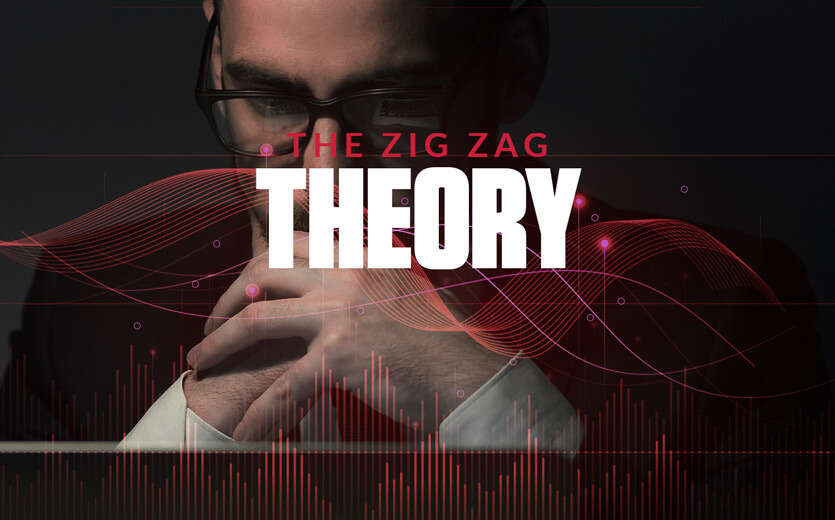 The zig-zag theory is a simple betting strategy that’s been around for nearly 40 years. In essence, the desperation that arises from fear of losing the next game (or the series) often provides a pivotal jolt to the team that just suffered a loss.

Therefore, the zig-zag theory advocates to bet on the team who just lost their previous game, as they are more likely than not (50%>) to rebound and win the following one. The odds on the team that just lost will favor the “sharp” bettor.

Momentum frequently shifts during 7-game series, and the zig-zag theory is a classic handicapping method developed to exploit this. We’re going to dive into how to use it to your advantage and explore some moneyline and ATS statistics relating to the zig-zag theory.

Where Does the Zig-Zag Theory Come From?

Invented by legendary sports handicapper Tony Salinas, the zig-zag theory implies that every game in an NBA or NHL seven-game series is affected by the game that precedes it. Salinas believed that oddsmakers didn’t properly account for this (when generating their lines for games within a series) and that they placed too much emphasis on factors like home court advantage.

When Salinas devised the zig-zag theory, he intended for it to be applied to the NBA playoffs. Not too long after its inception, other “sharps” discovered that the same principle of betting on the loser of the previous game (and the ensuing momentum shift this wrought) could be applied similarly to the NHL.

How Does the Zig-Zag Theory Function on Paper?

The principles of the zig-zag theory apply to any series that has a 2-2-1-1-1 format.

Before 2013, the NBA finals were played in a 2-3-1-1 setup. However, many believed that the lower-seeded team was given an unfair advantage by playing the 5th game on their home court. The NBA finals have reverted to their original 2-2-1-1-1 structure since 2013.

Some handicappers apply variations of the zig-zag theory to the NFL and MLB, but the zig-zag theory has far less relevance in these sports than it does in the NBA and the NHL, thanks to the 2-2-1-1-1 structure. It simply doesn’t have the same efficacy when taken out of that context.

Now that you’re familiar with the basic concept that underlies the zig-zag theory let’s look at some statistical applications.

Home court advantage means a lot in the NBA. NBA home teams win 64.5% of the time, compared to 55.3% in the NHL. Because of this advantage, betting lines will often dramatically favor the home team, especially if they win Game 1. Over the course of NBA history, road teams who lose the first game win Game 2 slightly over 34% of the time. 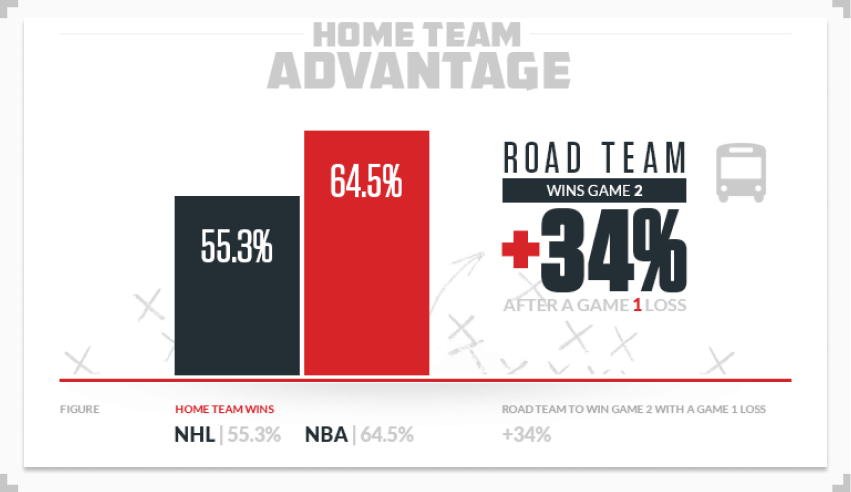 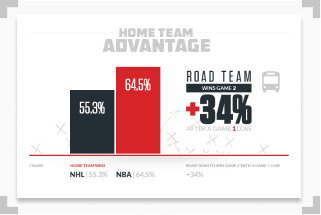 Just because the home team is more likely to win Game 2 doesn’t mean there isn’t value for bettors. 34% isn’t a negligible number by any means! Because the majority of bets will go towards the home team, there’s tremendous opportunity for betting on an event that occurs over 1/3 of the time.

The implied probability of the odds attached to the road team winning Game 2 will reflect a significantly lower percentage than 34%. Historically, there is a strong tendency for overreacting to a single game loss.

Even if the road team is dealt an ugly and embarrassing loss on the road, it doesn’t necessarily dictate that all hope is lost is for their Game 2 chances.

Let’s take a look at some aggregated statistics of teams rebounding from losses in the NBA playoffs.

If the road team upsets the home court favorite and wins Game 1, 76% of the time, the home team will come back to win Game 2. Don’t get fooled by an early upset.

In Game 2s, no matter the specifics of the matchup, the team that lost the previous game will cover the spread on their next game 56% of the time.

When the home favorite is 2-0 and plays Game 3 on the road, the lower-seeded underdog usually shines when they return to their home court. Historically, they possess a 65% win in the market for the moneyline and a 68% winning percentage against the spread. Both outcomes occur around 2/3rds of the time, a notably high rate.

Historically, favored teams who lose their last game by four points or more are likely to win against the spread during their next game. The record of teams in this situation is 98-69 (a 58.7% winning percentage)!

These statistics are a great starting point, but the zig-zag theory should always be considered in context. It’s always up to you to decide if you think there’s value on a particular line in the NBA playoffs.

The Zig-Zag Theory and NHL Betting

During the NHL playoffs, the smartest time to apply the zig-zag theory is when you bet on a team to avoid a sweep.

Of course, the team poised to sweep is likely to be heavily favored at online hockey betting sites . Bookmakers might have all the appropriate statistics in hand, but lines are moved by oddsmakers to create equal betting volume on both sides. It can be nearly impossible to imagine a team who’s lost three straight matches to successfully regroup.

Never underestimate what a truly desperate hockey team can accomplish under the pressure of elimination though! Most of the public doesn’t investigate the statistics underlying sweeps, and as such, they’re likely to bet on the team that won the previous four games.

The Zig-Zag Theory Is Just Part of the Puzzle

We don’t recommend putting too much faith in the zig-zag theory in isolation. Use your sports knowledge to form your own unique inferences and conclusions about a team’s chances. Keep yourself current with the latest sports statistics, along with injury lists and coaching adjustments.

Every series and every game within a series is different. Both the tangible and intangible aspects of a specific playoff series will factor into every single game, but the same goes for luck.

Like any sports betting strategy, the zig-zag theory should only be one tool in your repertoire. There certainly isn’t a surefire methodology to be a successful bettor: When it comes to betting on sports, success always requires hard work, research, experience, and knowledge.