Upcoming Match-ups
There is no data for this sport.
Home > News > Entertainment > Game of Thrones Odds – Who Dies, Who Thrives in Season Six?
Comments

Spoiler alert for the people who don’t read titles.

In case you didn’t know, winter is coming! At least that’s what they keep telling us.

The sixth season of Game of Thrones is upon us, premiering on April 24th on HBO. For some (me) this show is television’s equivalent to crystal meth: it’s impossibly addictive and responsible for a lot of death and despair. At least the show doesn’t cause nervous twitching, night shivers, and loss of teeth … yet.

The end of season 5 left everyone in a tizzy because Jon Snow was stabbed (to death?) by those dirty bastards in the Night’s Watch. It caused a bit of a ruckus on social media, and still to this day, people don’t want to believe it. #OllyMustDie

Author George R.R. Martin has been enjoying life as one of the most successful authors in the known universe, and the spoils that come with that. So naturally the HBO series is set to surpass the books this season, which makes prognosticating far more fun! We no longer have to listen to those smug “reading people” anymore. Pfft … reading.

So as we enter uncharted territory, what does season six hold for us GoT junkies? Below are some odds that pertain to possible plot lines, character deaths, and, of course, the potential return of our beloved Jon Snow. 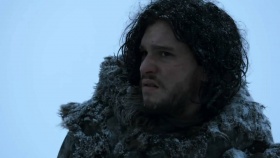 Will Jon Snow return? There is a lot of confusion. The show creators have been pretty adamant that Snow is as dead as a doornail, and that could be the truth, but is it the whole truth? Remember, unless you cut off the head and burn the body, never say never about dead characters coming back to life in some shape or form. That’s what someone who read the books told me.

Actor Kit Harrington was seen in locations where GoT was filming. He also didn’t cut his hair and was seen sporting his black locks that he vowed to cut off as soon as he was contractually able to.

But Kit Harrington having a role in the show does not mean Jon Snow, as we know him, is alive. He could come back as someone or something else. Or maybe Snow is really and truly dead and Harrington was only on set to film flashbacks. Below are a few theories with odds on the possible ways that Jon Snow may or may not return.

Odds on when Jon Snow will return in season six:

*”Return” does not include dreams, flashbacks, or a dead body.

Look, I have no idea who is going to die. But, heretofore, the show has operated on a pretty simple premise:  if you love a character, they’re gonna die.

Based on a few online rumors, news that a couple actors are moving onto movies, and just an overall hunch, here are the odds on who will meet “The Stranger” in season six.

Odds to die in episode one of season six:

Odds to die at any point in season six:

There are rumors online about potential storylines for the upcoming season. As mentioned above, the show has surpassed the books, so all the online pontificating is purely conjecture, but spoiler alert, nonetheless, because some of these are bound to be bang-on.

Ned Stark in an important flashback: 1/3
Khal Jhaqo taking Daenerys and his Khalasar to the city of Vaes Dothrak: 1/3
the return of “The Hound” and a fight between him and his brother, “The Mountain:” 13/7
the White Walkers taking down the Wall and marching South: 1/1
the return of Brynden “The Blackfish” Tully: 13/7
Ramsay Bolton killing his father, Roose Bolton: 13/7
Jon Snow being outed as the son of a Targaryen: 13/7
the release of Daenerys’ other two dragons: 7/3
Sansa Stark forming an alliance with Davos Seaworth to take back Winterfell: 3/1
an appearance from “Lady Stoneheart”: 3/1
the revelation that Daario Naharis is actually the true leader of the “Sons of The Harpy”: 4/1
the return of Stannis Baratheon from the dead: 19/1

The season five finale raked in over eight million viewers, and each season has tended to see a boost from the last.

Over/under on the number of viewers for the premiere (April 24): 8.5 million

Over/under on the number of viewers for the finale (June 26): 9.11 million