Is the very fact that we are talking about a potential UFC fight between Floyd Mayweather and Conor McGregor a sign that we are entering the end times? Is so, bring on the Apocalypse, because it’s bound to be entertaining and rife with betting opportunities.

Floyd Mayweather Jr. has been releasing some cryptic videos about possibly stepping into a UFC octagon and it sent fans and media alike into a tizzy. Will it actually happen or is it nothing more than a PR stunt?

“Money” Mayweather went 50-0 in his boxing career which included the “Money Fight” against UFC lightweight champion Conor McGregor last summer. During the press tour for that fight, Mayweather said he would “whoop” McGregor in the UFC. Afterwards, McGregor claimed Mayweather promised a second go-around in the octagon.

Last December, Money threw more gasoline on that fire when he told FightHype.com that, if he were to return to fighting, it would indeed be in a UFC octagon: “They just called me not too long ago and asked me to come back … I can come right back. If I want to, I can come right back to the UFC. I can go fight in the octagon – I can go and do a three or four-fight deal in the octagon and make $1 billion.”

When UFC President Dana White was asked about it, he told ESPN that talks were indeed happening between the UFC and the Money Team.

“We’re talking to Floyd about doing a UFC deal,” White told ESPN. “It’s real. He was talking about boxing Conor McGregor. Was that real? Have you heard Floyd talk about many things that aren’t real? He usually tips his hand when he’s in the media, and then that sh*t ends up happening. … We’re interested in doing something with Floyd. Everything is a realistic possibility. Mayweather vs. McGregor f*cking happened. Anything is possible.”

“We’re interested in doing something with Floyd. Everything is a realistic possibility. Mayweather vs. McGregor f*cking happened. Anything is possible.” – Dana White, UFC president

When Mayweather seemed to throw cold water on the idea, we chalked up the talk as two media-hungry personalities doing what they can to stay in the spotlight. But then news broke that negotiations are still happening between the UFC and the Mayweather and McGregor camps, and that a $400 million dollar fight is maybe, possibly in the works.

Sound crazy? It is, in some respects.

Anyone who knows anything about mixed martial arts knows that you don’t pick up the sport in a matter of months. As CM Punk will tell you, natural athleticism won’t get you very far.

When former UFC middleweight champion Michael Bisping weighed in on the possibility of Mayweather getting into the cage, he didn’t mince words. “I think he’s probably trolling people,” Bisping said on his podcast Believe You Me. “I honestly can’t see Floyd Mayweather fighting mixed martial arts and certainly not in the UFC … Conor McGregor in an MMA fight will f****** destroy Floyd Mayweather like he’s never seen.”

Based on Mayweather’s Instagram video, it does seem like Mayweather is trolling people and merely cashing on sponsorship money from online betting site Paddy Power. He’s not only wearing their logo on his shorts but also asking, “2018, Floyd ‘Money’ Mayweather, MMA, what are the odds, Paddy? What are the odds?”

If it is just a viral advertising campaign for the online betting site, then mission accomplished; they racked up seven million views and caught the sports media, hook, line, and sinker. McGregor recently responded that if Mayweather’s videos were nothing more than quick promotional cash, it would stay with him forever.

“If it is, it will follow him for the rest of his days, that he did not do it,” McGregor said. “I said I would do it and I stepped up and I done it. It’s his time now.”

Let’s be honest. Mayweather has done a lot of things in his life that should bother him for the rest of his days and yet he doesn’t seem to care. Not getting into the cage would probably be the least of his regrets. 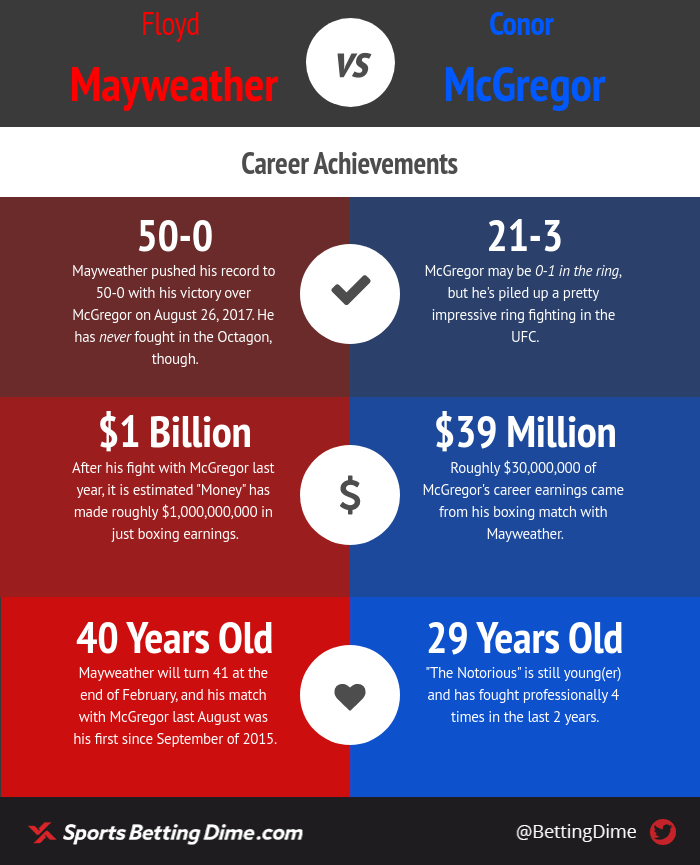 McGregor has stated that he would do whatever he wanted to Mayweather if their rematch were to happen in the Octagon, and he’s right. The brash Irishman’s kicking game, alone, would be too much for the undefeated boxing champ to handle.

So where does that leave the smart money when it comes to the line offered, which has Mayweather making his MMA debut in 2018 at 5/1 (+500), and the odds of the whole thing being a promotional troll job at 1/9 (-900)? Given that we see the odds of Mayweather entering the UFC octagon in 2018 at 9/2 (+450), we’re inclined to bet on “YES.” As last summer’s improbable boxing match proved, it’s not wise to bet against two guys who stand to make ludicrous sums of money doing what they love.