Play like a pro with our expert NBA betting advice. We have the latest trends, analytics, and insights to help you make the most of your moneyline, ATS, and over/under bets. Today we focus on the Mavericks vs Warriors from American Airlines Center in Dallas (7:30 PM ET).

The Mavs will look to exact some revenge tonight when they play host to the Warriors. Golden State has already beaten Dallas twice this season, outscoring the Mavericks by 22.5 points per game in a pair of lopsided wins.

Leading the charge for Dallas will be explosive rookie Dennis Smith Jr., who recorded his first career triple-double on Friday in a 128-120 win over the Pelicans. The North Carolina State product had 21 points, ten rebounds, and ten assists, and was consistently able to get to the hole thanks to his explosive first step. Dallas is 5-2 since Smith returned from a strained hip in mid-December, and are suddenly one of the most competitive teams in the NBA.

“He kept attacking and he kept encouraging everybody in the huddles during timeouts, too,” head coach Rick Carlisle said following Smith’s big night. “We drafted him because we think he can be a great player and one of the best players ever to play in a Mavericks uniform.”

The Warriors also have a pretty decent point guard of their own in Steph Curry. The two-time MVP returned from an 11-game absence on Saturday night to drop 38 points on the Grizzlies. Curry shot 10-17 from the field and connected on a season-high ten threes. His return means the Warriors are back at full strength for the first time since training camp and in perfect position to continue their quest to become the first team since the 2012-13 Heat to win back-to-back championships. 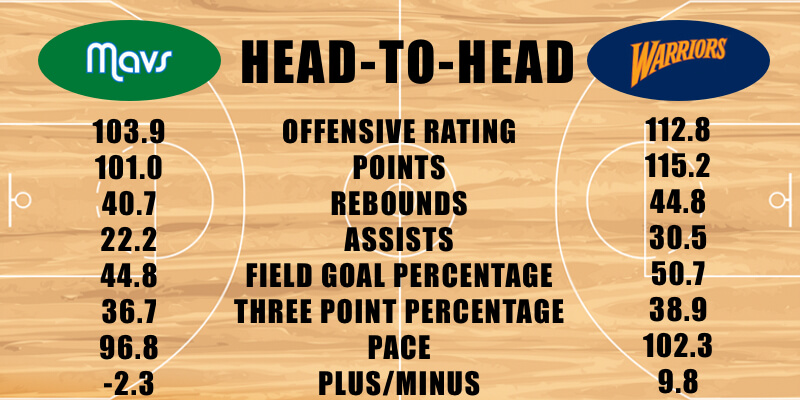 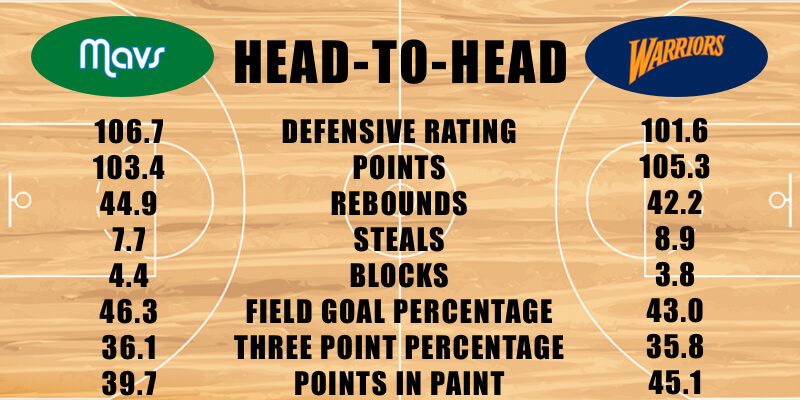 This is the third meeting of the season between the Mavs and the Warriors. Golden State crushed Dallas 133-103 on October 23rd behind 29 points from Curry and 25 from Kevin Durant. The Warriors scored 40 points in the opening quarter and never looked back, hitting 15 of 39 three-point attempts. Wes Matthews paced the Mavs with 19 points and was one of seven Dallas players to finish in double figures.

The Mavs fell to the Warriors again on December 14th, losing 112-97. Golden State was without the services of Curry and Green, but it didn’t seem to matter as Durant stepped up with 36 points, 11 rebounds, and seven assists in just 34 minutes. Israeli forward Omri Casspi had his best game of the season, finishing with 17 points and 11 boards. Dirk Nowitzki had 18 points and nine rebounds for the Mavs, but the team was unable to keep the undermanned Warriors off the glass.

MAVS: The Mavs won their fourth straight game with a rousing 116-113 victory over the heavily favored Thunder on Sunday. Harrison Barnes led the way with 24 points and Smith scored 11 of his 19 points during the final 1:39 to help Dallas overcome a monster performance from reigning MVP Russell Westbrook. The Mavs shot 51.7-percent from the floor and committed just eight turnovers.

WARRIORS: The Warriors mauled the Grizzlies 141-128 on Saturday night. The game marked the long-awaited return of Curry, and the two-time MVP didn’t disappoint, hitting a season-high ten three-pointers on 10-13 shooting from behind the arc. Four other Warriors scored in double figures as Golden State shot 58.8-percent from the floor and 54.5-percent from downtown.

Curry is back practicing with his teammates, but the Mavs have yet to set a timetable for the return of Steph’s younger brother. Finney-Smith is out due to quadriceps tendinitis and is not expected back until later this week. Noel is recovering from surgery to repair a torn ligament in his left thumb and is not expected back until the end of the month.

Iguodala has been experiencing stiffness in his lower back and is questionable for tonight’s game. Draymond Green sprained his ankle on Tuesday during practice and is considered questionable. Zaza Pachulia is also questionable due to an illness.

Nearly every team struggles against the Warriors, but few struggle as much as the Mavs, who have lost eight straight to the defending champs. Golden State’s biggest advantage tonight lies with Durant and Green, who have unexpectedly morphed into the NBA’s most menacing defensive duo. Both players have the quickness and mobility to chase shooters off the three-point line, as well as the length and toughness to contest shots in the paint. KD, in particular, has emerged as one of the league’s top rim protectors and is averaging a career high 2.22 blocks per game.

Durant and Green’s lockdown D is a big reason why the Warriors are second in the NBA in defensive rating and first in causing headaches for opposing forwards (editor’s note: not an official NBA stat). Harrison Barnes and Dirk Nowitzki could be in for a very long night. 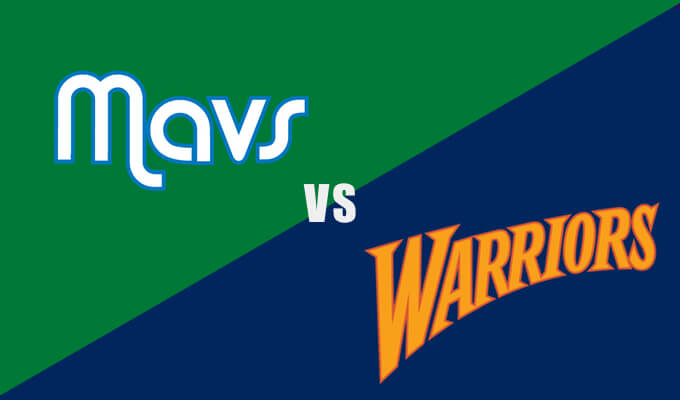 The Warriors have beaten the Mavs by an average of 22.5 per game in their two previous meetings, and that number likely would have been even larger if Curry, Green, Nick Young, and Zaza Pachulia had been available for the second match-up. The seven-point spread for tonight’s game is big for a team potentially playing without its best defender, but the Warriors are well rested and fully locked-in after sleep walking through the first few weeks of the season. Take Golden State and keep your fingers crossed that Kerr keeps his starters in for a portion of the fourth quarter to keep the lead out of reach.

If ever there was a team capable of covering an over/under total all on its own, it would be the Warriors. Golden State scored 141 points on Saturday against Memphis and has already scored 120-plus 15 times this season. Even when one of their All-Stars is missing or has an off night, they still have three more superstars capable of stepping up and single handedly winning a game.

Fortunately, Golden State doesn’t have to do it all on its own. The Warriors should get plenty of help on the scoreboard tonight thanks to the suddenly surging Mavs. Dallas is averaging 122 points over its last two games and is finally close to being at full strength thanks to the return of Smith, who missed six games in December with a strained left hip, and underrated facilitator Josh McRoberts, who does an outstanding job of spreading the court and setting up teammates.

Take the over and enjoy the fireworks as these Western Conference teams stage a good ol’ fashioned shoot-out.

Mavs vs Warriors is just one of 12 games on tap on Wednesday night. Here are our other 11 straight up picks. 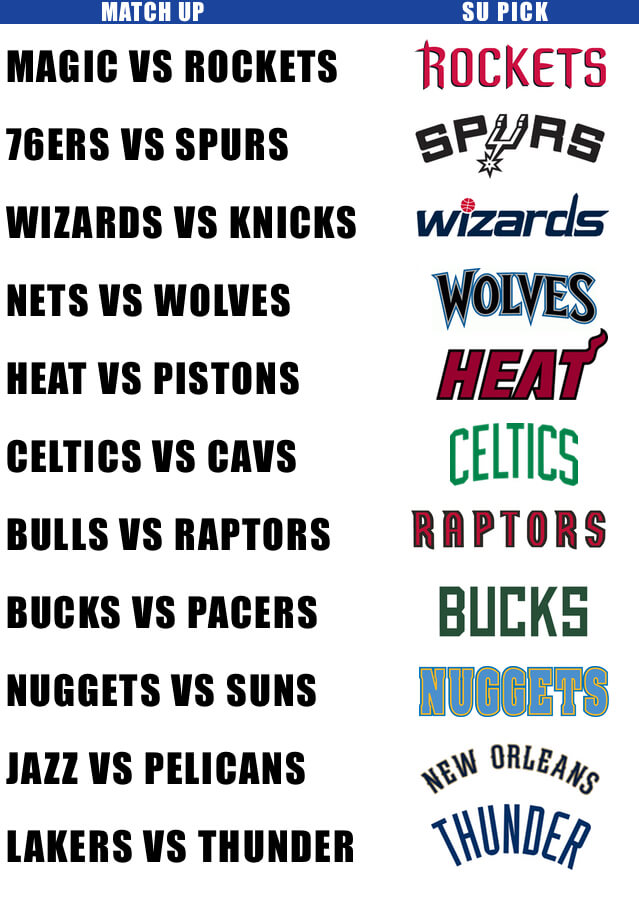