When most fans discuss the Warriors these day they focus on the team’s quest to become just the seventh NBA franchise to win back-to-back championships. It’s a compelling narrative, but it’s not the only piece of history Golden State is chasing. Steve Kerr’s club is also on the brink of becoming the best shooting team ever thanks to their astounding 57.6 effective field goal percentage.

Effective field goal percentage, for those unfamiliar with the concept, measures a team’s shooting from inside and outside the arc, and accounts for the fact that three-point shots are worth 50-percent more than two-point shots. It’s an especially handy metric for a team like the Warriors since they take – and make – so many shots from downtown.

The Warriors have long been one of the NBA’s elite shooting squads, but they’ve surpassed even their own expectations this season by shooting 50.7-percent from the field, 39.3-percent from beyond the arc, and 81.3-percent at the free-throw line.

Those marks are especially impressive when you consider that only eight players have ever shot 50-percent from the floor, 40-percent from behind the arc, and 90-percent from the line over a full season. The Warriors are practically doing it as a team. Let that sink in for a second.

The Warriors assault on the history books has been nine years in the making. It began in 2009 when Golden State took a flyer on Steph Curry with the seventh pick in the draft. It picked up steam in 2011 when they selected Klay Thompson 11th overall, and it went into hyperdrive in 2014 when Steve Kerr came onboard. The 52-year-old coach drastically improved the team’s half court spacing and gave shooters a perpetual green light to launch from deep.

The final piece of the puzzle fell into place in 2016 with the unexpected addition of Kevin Durant. The four-time scoring champ has shot over 52-percent from the field in each of his two seasons in Oakland and has allowed his teammates to flourish by drawing so much attention from opposing defenses.

Curry, Thompson, and Durant have all been shooting the lights out this season, but less heralded additions like Omri Casspi and Nick Young have also put their stamp on the team. Casspi is posting an effective field goal percentage of 60.4, while the usually erratic Swaggy P is over 55-percent for just the second time in his career. Every bit helps when you have history in your crosshairs.

Curiously, as impressive as the Warriors have been this season, they still aren’t close to having the best three-point shooting percentage in NBA history. That distinction belongs to the 1996-97 Hornets, who connected on 42.8-percent of their treys. Charlotte had nine players who shot over 40-percent that season including Dell Curry, who used Steph as his personal ball boy during many of the team’s shoot-arounds.

Highest Three-Point Percentage in a Season

The Warriors are also not in the top three for the highest field goal percentage in a season. All three spots are occupied by the Showtime Lakers, who feasted on fast break feeds from Magic Johnson. Like the Warriors, those squads were also perennial championship contenders.

The Warriors are not among the NBA’s most reliable free-throw shooting teams either. The 1989-90 Celtics set the all-time mark from the charity stripes when they connected on 83.1-percent of their freebies. Larry Bird led the way that season by hitting an NBA-high 93-percent of his free-throws.

So, if the Warriors don’t have the best three-point percentage, field-goal percentage or free-throw percentage, how can they still be considered the best shooting team of all time? The answer is volume. 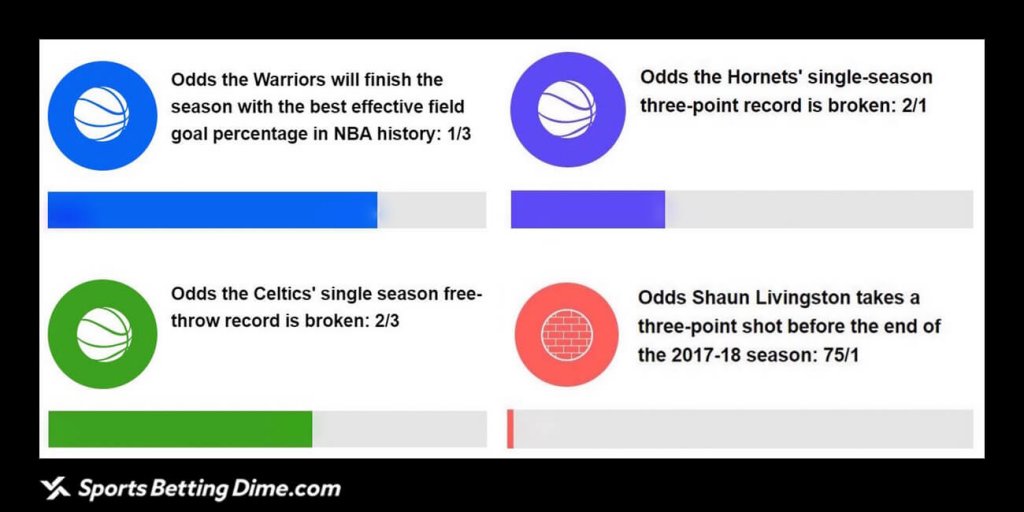 This year’s Warriors squad features an absurd 14 players with an effective field goal percentage of 50-percent or better. The only two players below that mark are Shaun Livingston, who has yet to take a three this season and relies on contested jump shots, and Patrick McCaw, who has been in and out of the line-up and has seen his usage rate drop.

the Atlanta Hawks have eight players with an effective field-goal percentage below 50-percent, including their top scorer, Dennis Schroder.

By comparison, the Atlanta Hawks have eight players with an effective field-goal percentage below 50-percent, including their top scorer, Dennis Schroder. It’s probably not a coincidence that they’re also 21-50 and headed for the lottery for the first time in 12 seasons.

In any other year, Golden State’s superior shooting would make them prohibitive favorites to win an NBA championship, but this isn’t any other year. The Rockets, led by James Harden and Chris Paul, have a higher offensive rating and are four games ahead of the Warriors in the standings.

Golden State will need a phenomenal postseason run and some timely buckets to surpass them, but if history has taught us anything, it’s that these Warriors can really shoot. Grab your popcorn and enjoy the show.