Avoid the Herd Mentality and Grow Your Sports Betting Bankroll 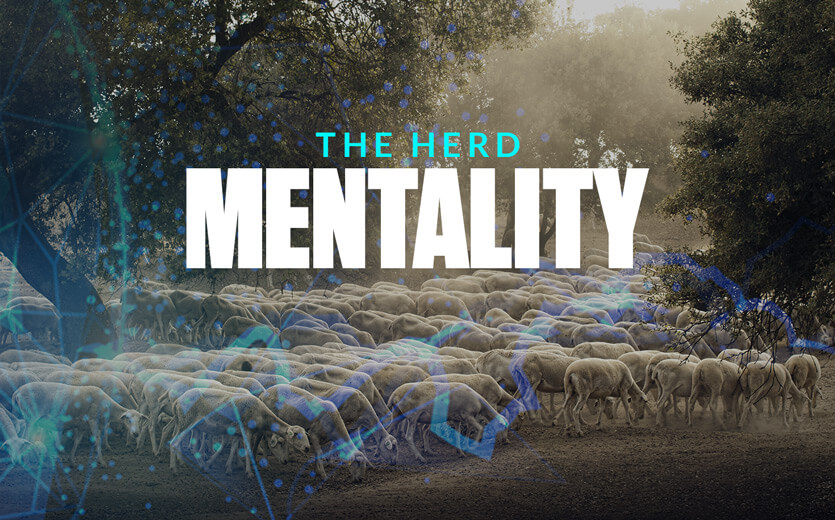 Whether it’s in the stands of your favorite team’s stadium, in the boardroom, or in your stock portfolio, we’ve all done something (or put money on something) just because everyone else is doing it.

This tendency often leads us to make the wrong decision, and can easily end in harm. When it comes to sports betting, copying others in a group for the wrong reasons happens a lot.

To learn more about herd mentality and how to avoid it (so as to increase your sports betting winning percentages), read on!

What Is the Herd Mentality?

Also known as the gang mentality, mob mentality, or pack mentality, herd mentality refers to the human response to act on our emotions and desires to conform in group settings.

In most cases, herd behavior refers to actions and decisions that we wouldn’t usually make on our own. When we fall for the herd mentality, we mimic the actions the group we’re in, whether they’re rational or irrational.

It’s important to note that this applies to decisions made without any centralized direction. The herd mentality doesn’t refer to situations where large groups of people follow a group that’s being led by any one person. It refers to groups where decision-making is decentralized, without direction, and happening organically.

The Herd Mentality Is Universal

Individuals in a crowd or a group (acting as a collective) is a universal phenomenon in nature. Animals exhibit the herd mentality in much the same way as ordinary people do in riots, protests, strikes, and sporting events.

As far as cognitive biases go, it’s about as hardwired as they come.

How Was Herd Mentality Proven?

Like many other cognitive biases we’ve discussed in our betting psychology series, herd mentality comes from the field of behavioral economics.

These studies derive from some of the most famous experiments in psychology’s history: the Asch Conformity Experiment. The purpose of this study was to test our psychological predisposition to conformity in the face of group pressure.

In the experiment, a group of eight college-age students (all male) participated in a straightforward perceptual test. They were told they were taking part in a “visual test.”

However, there was only one true participant, as seven were in fact actors. Their role? To convince the one subject that they were genuine participants in the experiment.

In the test, the actors had agreed and rehearsed what their responses would be when faced with certain prompts.

Each student looked at a card with three lines on it: line A, line B, and line C. They were then shown an additional card (the target card), and asked to state which line was identical to the target line. The real answer was always evident.

The experiment was set up so that the real subject of the test sat at the end of the row of men, meaning that he had to give his answer last.

What Happened in the Study?

There were 18 trials in the study, and the actors were instructed to give an obviously wrong answer on 12 of the tests. As such, the purpose of the experiment was to determine whether the subject would conform to the majority view of the group.

It’s important to note that in the control group (the group where the actors gave the obviously right answers instead of the obviously wrong ones), less than 1% of the participants ever answered incorrectly.

What Drove the Asch Conformity Experiment?

Researchers determined that people conformed to their peer’s opinion – even when they were obviously incorrect – for primarily two reasons: the pressure to fit in and the belief that their peers were better informed.

These two factors were combined to comprise a theory for the phenomenon: The herd mentality.

Just as the Asch study initially proposed, the majority of contemporary researchers have also ascribed the social pressures afforded to conformity as the driving factor behind the herd mentality. The desire to fit in is a powerful force!

Our motivations for giving in to social pressures are three-fold: Firstly, we crave a sense of belonging. We tend to automatically ascribe to the belief that the more people who do or believe something, the less likely they are to be wrong, incorrect, or irrational. We also tend to believe that others might know something we don’t.

Even if our convictions and opinions are well-founded or long-standing, these factors can easily override them.

As humans, we’re naturally sociable and have an innate desire to be accepted within a group, as opposed to being labeled as an outcast. When we follow in the footsteps of a group and mimic its behavior, it’s a natural way to become a member of that group.

Secondly, we tend to believe that the more people buying into a decision means that it’s more likely to be the right decision. When we’re unsure of ourselves – or think a determination may be misguided or irrational – we tend to proceed as if others had already done so.

Lastly, we often copy others or give in to group pressure when we think they might know something we don’t. We convince ourselves that if we copy others who have information we don’t, it’s a rational strategy.

A Famous Example of the Herd Mentality

The 2008 financial crisis – one of the most severe economic events in human history – has at least been partially attributed to the herd mentality. In the same vein, blame for both the 2001 dot-com crisis and the Bitcoin speculative bubble has also been assigned to this way of thinking.

In all three cases, the unbridled growth and eventual collapse was due to investors moving more money into their investments because they saw other investors doing the same.

In a vicious cycle, investors’ doubts would be assuaged by other confident investors, who in turn would see that more people buying in were good reasons that they themselves should be more confident in their decision.

The result was a self-perpetuating feedback loop that stopped working when each respective bubble finally popped.

The Herd Mentality Is the Most Prevalent Cognitive Bias

In a study of Chartered Financial Accounts (who are required to educate themselves on cognitive biases to receive their certification), the overwhelming majority voted for the herd mentality as being the most common cognitive bias they’ve encountered in the course of their career.

Of course, the influence of the herd mentality in the domain of finance is exceptionally well-documented, but it isn’t hard to imagine that social conformity and the following of a group is standard in a variety of fields.

How Exactly Does the Herd Mentality Affect Our Sports Bets

One area that the herd mentality is uniquely well-suited to rear its ugly head is sports betting. When we’re betting on sports, our goal is simple: We want to win and grow our bankroll.

However, it isn’t possible to grasp the fundamentals of sports betting overnight.

As such, many sports bettor often copy the behavior of their betting peers on forums or follow the predictions of various media pundits. Bettors often feel pressure to use specific systems that are in style or get behind teams that are on hot streaks. It’s not a surprise: The herd mentality is especially common in areas where we feel we don’t have a lot of expertise.

Following the herd isn’t going to get you an above average winning percentage. We even bought the services of four different professional handicappers and copied their every move, and we still ended up in the red.

Whenever you feel the pressure to change one of your bets because you see other people going against you, stop yourself! If you’ve done your research and are confident in your strategy and systems, don’t change your mind just because the public is against you.

Capitalize On the Herd Mentality

The herd mentality usually results in one side of the line being overvalued. The uneducated public follows the media, and it cascades with the majority of the money ending up on one side of the line. As such, bookmakers try to balance the action and make the other side more enticing to bettors. For any astute bettor, this result means value.

This is why the Buffalo Bills were the most profitable NFL team to bet on in the 2018-2019 season, despite the fact that they went 6 – 10 on the season, losing nearly twice as many games as they won. Bad teams can still be valuable bets, which is why it’s crucial to look not only at what the media is saying and other bettors are doing, but also at the team’s historical return on investment in particular betting scenarios.

SBD Sharp is the best place to find surprising insights like the Bill’s extremely profitable losing season. Sharp bettors capitalize on the herd mentality when they fade the public, and this tool will show you exactly when it makes sense to do so.

As professional bettor Anthony Best attests, playing against the public is one of the oldest and most essential strategies in any sharps’ playbook. Avoiding the herd mentality can have big rewards!