I Bought “Guaranteed” Wins From Instagram Handicappers. Did They Deliver? 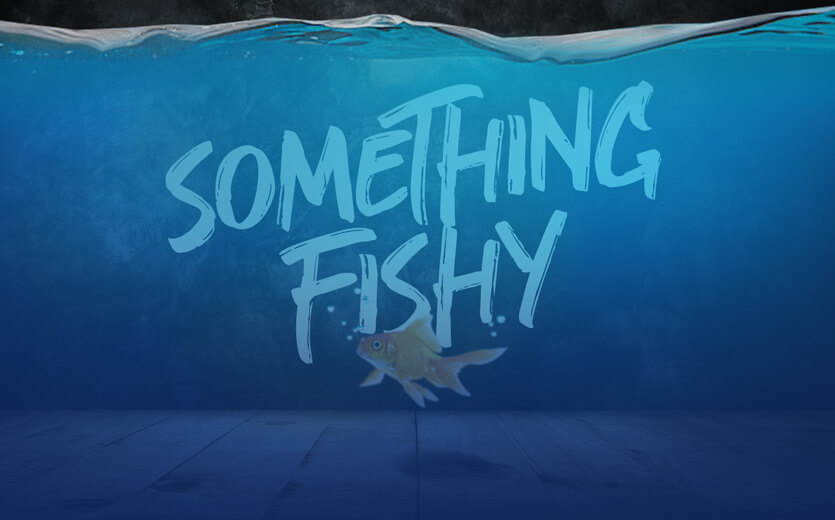 We live in the age of social media, where the authentic and the counterfeit share the same territory. Millions of products and services are sold over various social networks every single day, and among them is a service that used to exist only in the margins of the yellow pages: sports-handicapping picks.

Thanks to the recent legalization of sports betting, there are tens of thousands of Instagram sports-handicapping accounts, with hundreds more cropping up every day. I signed up for four of these ‘capping services to see if they could deliver on their promises of guaranteed wins. Here’s what happened.

To get started, I found exactly 100 Instagram accounts that clearly offered ‘expert’ sports picks in exchange for cash.

I stuck with Instagram exclusively for a few reasons. Not only does Instagram have more accounts to choose from than any other platform, but I’d heard a lot of rumblings about especially bad pick services being offered on Instagram. Plus, people can boast on Instagram better than anywhere else, and ultimately I was looking to investigate self-aggrandizing handicappers.

No social media platform has great policing or stringent content regulators, but Instagram is a visual medium, and its authorities are generally more concerned with scrubbing out a deluge of x-rated groin shots than sub-par handicappers. This is different than, say, Twitter or Facebook, which focus a lot more on the commercial aspects on their platforms.

There was a two-day lag between creating the initial 100-account list and the date I selected which ones to sign-up for. In that time, 13 of the 100 accounts were already defunct. Of course, I can’t conclusively say why they disappeared, but my educated guess is that they were either shut down for being fraudulent or were erased by their creators after picking too many losers.

I planned to reach out to 30 prominent handicappers and solicit their services. Because I wanted to focus on the handicappers who’re chiefly driven by social media, I only pursued those who took payments through posted Venmo, PayPal, or the CashApp addresses – I stayed off their websites.

I only got 16 responses from the 30 people I reached out to, and from there I narrowed it down to four accounts. I paid around $60 for a week of picks from each, and in nearly every instance, I was able to negotiate them down from their posted prices.

I didn’t go after the flashiest personalities, the most ridiculous messaging, or anything that looked obviously scammy. I wanted to take a sample of what I deemed to be an average Insta ‘capper.

A week is small sample size, but I figured between the NFL, NBA, NCAA, and NHL, I’d be able to get a (somewhat) clear picture of each handicapper’s sports betting acuity, and whether they possessed the magical predictive abilities they claimed.

I really wanted them to win because, after all, it was me and my bankroll who stood to gain from their success.

I planned to judge them on both their win-loss record, as well as how many units I was up or down at the end of the week. Don’t forget that a .500 record on picks won’t necessarily result in a profit, unless you’re betting all underdogs. Assuming your bets have an average of -110 odds, you need a 52.4% win rate to break even.

If you’re not familiar with the term “units” in sports betting, one “unit” generally refers to 1% of a bettor’s bankroll (which is the amount of money they have allocated towards betting on sports). Most handicappers recommend betting more units (i.e. 2 units, 5 units, or max units) on certain plays that they’re especially confident in.

Using units as a measurement is helpful because it allows us to factor in the odds assigned to each bet and, in turn, the profit or loss on each bet. This provides a more accurate assessment of a handicapper’s success than just win/loss rate, as win/loss rates can be very misleading if a handicapper is picking a lot of heavy moneyline favorites.

For example, a bet on the spread or game total typically has odds of -110, which means that a successful one-unit bet would return the bettor 0.9 units. A one-unit bet at -200 odds, however, would only return 0.5 units, while an underdog at +200 would return 2 units. Of course, if the bet is a loser, the bettor loses all of however many units he or she wagered on it. I also tabulated each handicapper’s record by moneyline, spread, and totals bets.

I didn’t limit myself to just full game sides either, and I played a lot of period/half/quarter lines, as the handicappers instructed me too. Ultimately, I evaluated each handicapper by winning percentage and the units I gained or lost, as the number of picks we received from each ’capper varied greatly.

The First Handicapper: Imperious and Uncooperative

The first handicapper I really wanted to buy picks from was a big one, and granted he didn’t perfectly represent the average. But, I knew he was really popular on the ‘gram, and much of his popularity was borne from this social media success. I wanted to see if the famous guy would talk to me, basically.

You’d recognize the name; he’s on TV a lot. However, I was quickly rebuffed, because of my bankroll being far too small. I really tried to convince him to ‘work’ with me, but to no avail. 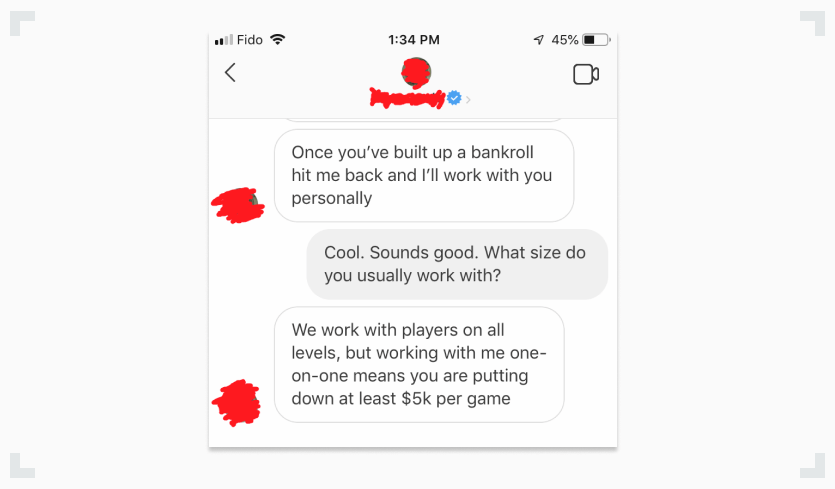 Am I betting 5K on a game? Absolutely not. Is anyone who’s betting 5K a game paying this dope to pick for them? I really, really doubt it.

This ‘capper gave me the highest volume of picks of any handicapper, nearly 80 in total. After getting 17 picks on the first day, in four separate messages, I took it as a good indication that this guy (or guys) had no idea what they were doing. Turns out I was right. 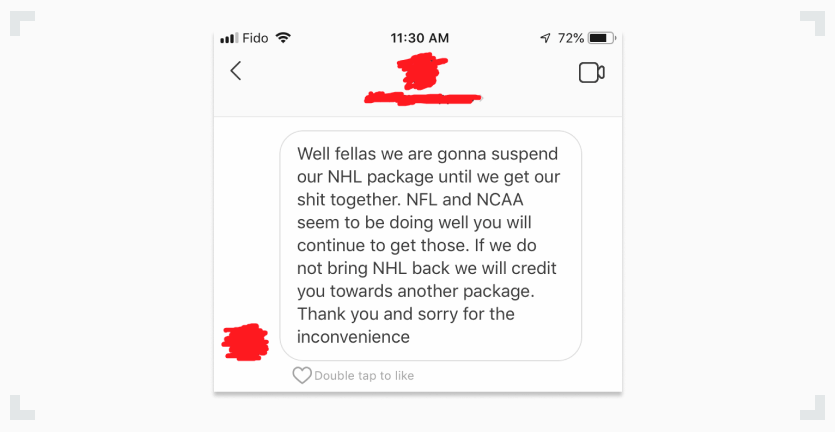 In the week I was with this service, I was told not to take the NBA picks too seriously, and the week culminated with the account suspending their NHL picks after incurring severe losses (the NHL picks he sent me had a 40% success rate). 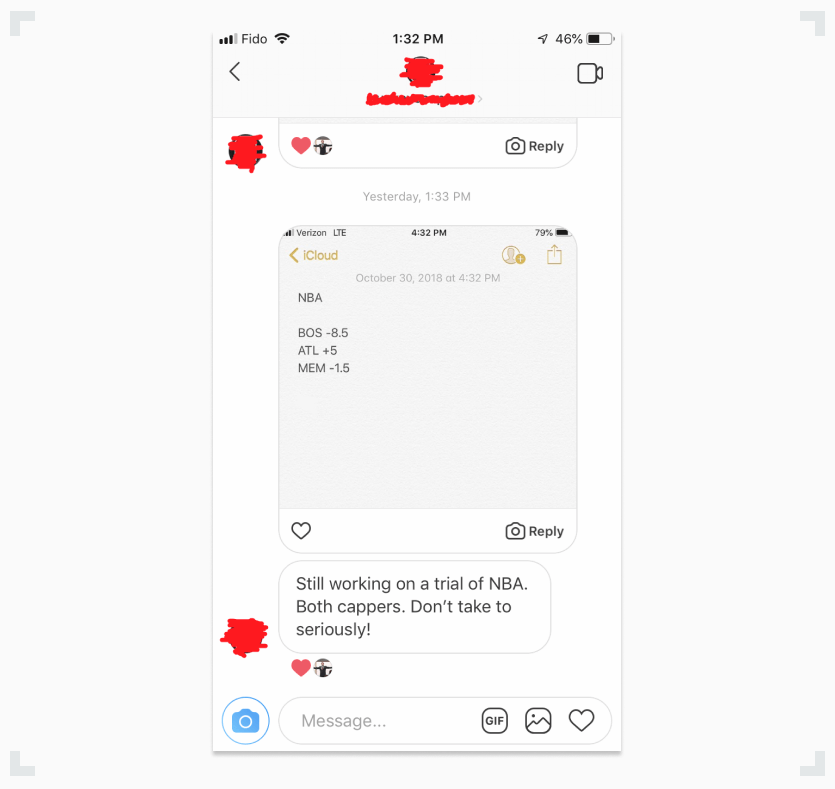 He did deliver picks promptly and was always contrite when he doled out duds. That being said, this capper was obviously dishonest.
A couple days into signing up, he asked me how I liked his service. I thought it was a good opportunity to see how honest he was, so I asked him what my win/loss record was.

He responded by inflating my win total by seven wins, I guess hoping that I hadn’t tabulated it myself.

While I did eventually come up in the black, it wasn’t by much. Being up 2.4 units didn’t cover the cost of the service, and the ‘capper made it expressly obvious there was very little rhyme or reason to their methods.

If I was to guess, this account is probably run by a bunch of high-school or fledgling college students, who are wholly ill-equipped to beat any bookmaker.

This ‘capper only gave me 1-2 picks a day (and no picks, curiously, on some days). He was impressively terrible. He showed some remorse for the fact that I’d have been better off flipping a coin than paying him, at least. 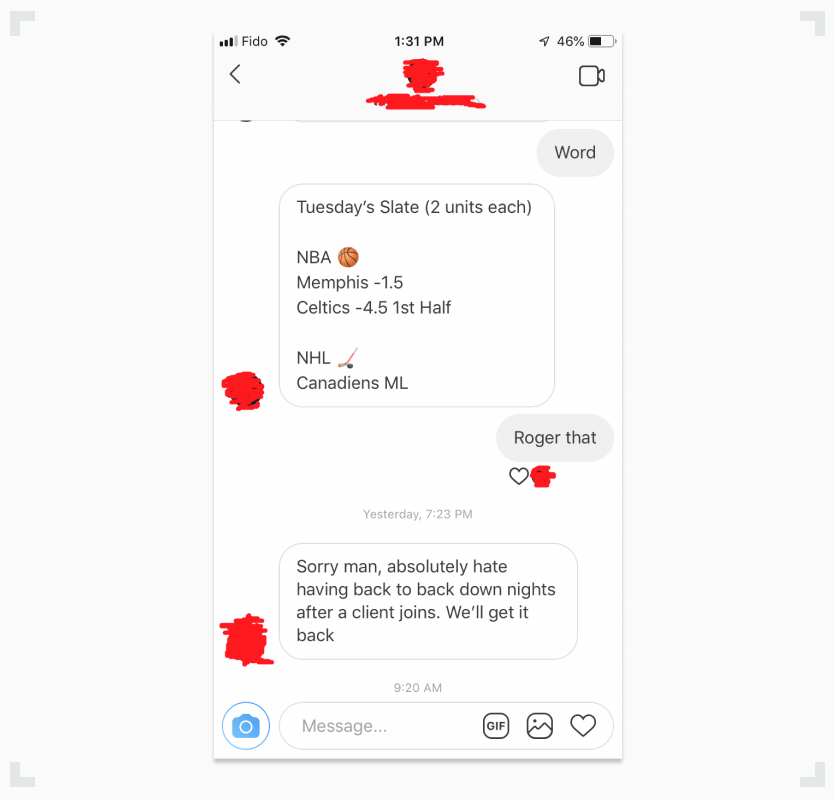 This really reinforced how hapless most Insta ‘cappers are. He had thousands of followers and lots of engagement on his profile, but he was unreliable and probably couldn’t pick his left hand from his right.

I lost 4.3 units with this capper, and it would have been far worse had a 3-unit play not come through on the last day.

My honest assessment of this handicapper is that he knew what he was doing. He didn’t often bet on sides, instead electing for first-half, period, or quarter lines.

Given that these lines aren’t as heavily scrutinized as game lines, I thought he might actually be using, you know, numbers and statistics, to gain an edge.

He generally played it reasonably safe, rarely recommending big unit plays and opting for mostly favorites. While +2.68 units wasn’t a huge return by any means, this ‘capper took a heavy beating on one particular day, when a slate of relatively heavily favorites were all bested by long-shot underdogs. It was bad luck, essentially, and I think under different (more typical) circumstances he’d have been more successful.

This ‘capper was definitely the most competent one I dealt with, for my money. Plus, he boasted an impressive 71.4% winning percentage on totals bets, which is nothing to sneeze at.

This handicapper was the least exciting. He’d message me his picks via a screenshot taken on Apple Notes every morning at the crack of dawn. There was absolutely nothing noteworthy about him. He was responsive and clarified everything I asked him promptly.

Again, though, he couldn’t pick winners for the week. If there was one thing noteworthy about my experience with him, it’s that he boasted an awe-inspiring record for the first few days, and then proceeded to tank the rest of the week. He was doing pretty well, until on the last day he dropped a 5 unit play, a 3 unit play, and one maximum unit play.

This ‘capper was a testament to the fact that anyone can get lucky betting on sports, and that you need a big sample size to properly judge a ‘capper.

Even with the one handicapper who picked correctly more often than not, these pick services dished out 73 wins and 70 losses, combined, resulting in resolutely mediocre 51% winning percentage. 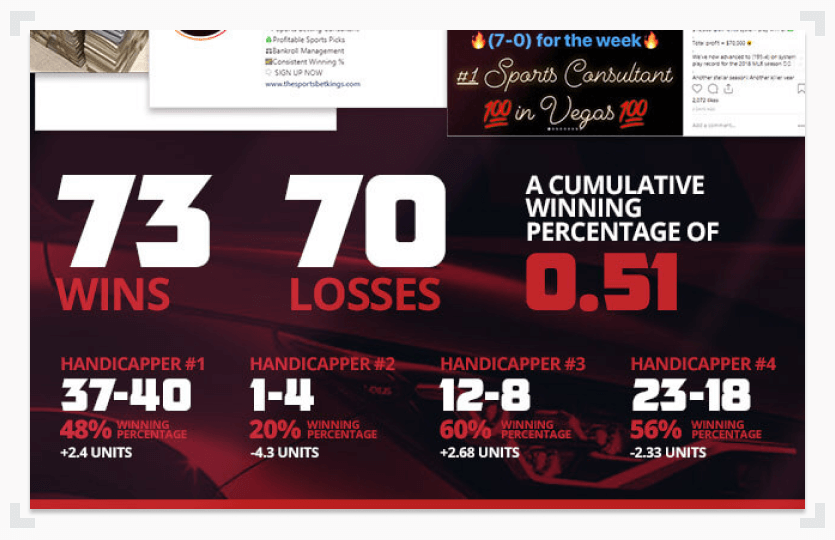 These four ‘cappers went 20-26 on the moneyline, 37-34 against the spread, and 16-10 on totals. Considering that moneylines are much easier to predict (albeit less profitable), this speaks to the fact that these handicappers largely didn’t know what they were doing, and perhaps they just got lucky in their record against the spread and on totals bets.

At the end of the week, between all 4 handicappers, I was down 1.55 units. Considering that the 4 pick services totaled roughly $240 for the week, I can conclusively say these Instagram ‘cappers didn’t deliver.

Instagram Handicappers? They Can’t Pick Their Nose, Much Less Winners

On social media, the strength of what you’re selling doesn’t seem to matter nearly as much as your ability to either manipulate people’s perceptions of you or just feed them what they want to hear.

People want to make money, and they want to think they’re putting their cash in the hands of experts. I can’t speak to anything else bought on Instagram (well, I know that the glorified Vitamin B capsules I bought under the guise of ‘nootropics’ didn’t make me any smarter), but I do know for a fact the antiquated aphorism “the house always wins” has stuck around for so long because it’s almost axiomatic when you consider the math.

That’s exactly what I found signing up for these shoddy sports handicapping services. For every Billy Walters, there’s dozens of, well, the services we signed up for. Be careful out there!