What Sports Bettors Need to Know About the Hot Hand Fallacy 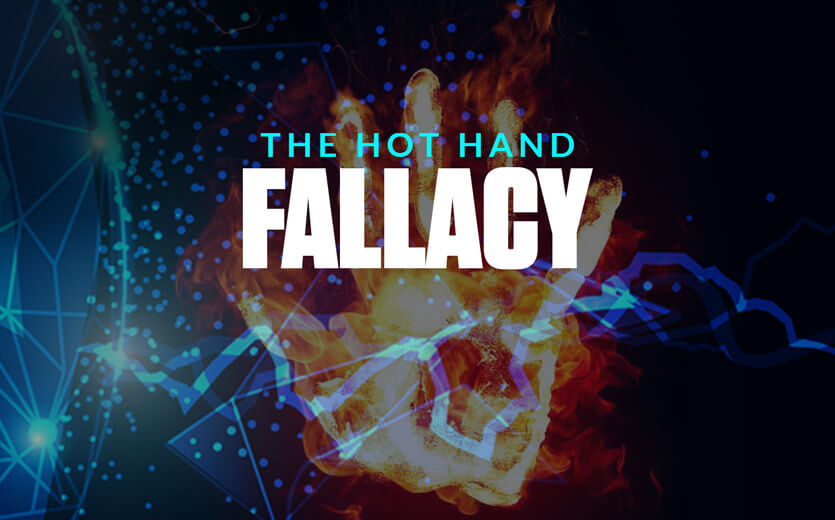 You’ve probably heard commentators and sportswriters refer to a player as having “the hot hand,” being “on fire,” or “streaking” when they hit multiple baskets in a row, or throw consecutive touchdowns.

What you might not know is that the idea of a player catching fire with a hot hand is, in fact, an illusion. It refers to a well-known cognitive bias called the “hot hand fallacy”. In this article, we’ll walk you through what the hot hand fallacy is, why we continue to make this error in our thinking, and how it relates to sports betting.

What Is the Hot Hand Fallacy (HHF)?

The Hot Hand effect is best described as, “if I’ve been winning, I’m more likely to win again.” The Hot Hand Fallacy refers to believing in the hot hand effect, which is incorrect (or fallacious).

It’s also important for us to note that the HHF isn’t the same as the gambler’s fallacy, but the two are closely related. Read our article on avoiding the classic betting error to find out the difference.

Of course, the hot hand effect doesn’t apply to a totally random event like a coin toss. Even if you got five flips of heads in a row, you aren’t any more likely to get heads than tails on your sixth try.

Sports aren’t random, as they’re based on many different variables that are harder to control for. Everything from what a player ate the night before to their natural talent level dictates the outcome of sporting events.

However, the father of the entire field of cognitive biases and behavioral economics, Amos Tversky, proved that the HHF did, in fact, apply to sports. Not just coin flips. Tversky (along with colleagues T. Gilovich and R. Valone) proved that NBA and NCAA players on a run of successful shots weren’t any more likely to sink baskets just because they were on a roll. Every shot attempt was statistically independent.

They found that, statistically, there is no causal evidence that a player really ever gets “hot.” Our belief that success brings about more success is, in fact, wrong, and there is no conclusive link between sinking three baskets in a row and sinking a fourth.

If This Sounds Confusing to You, You’re Not Alone!

The HHF (and other cognitive biases) have gone a long way toward debunking the fact that, just because something feels intuitively right to us, it doesn’t mean that it is.

Even Red Auerbach, the brilliant coach behind much of the Boston Celtics success throughout the years, wrote off Tversky’s work instantly. He stated “Who is this guy? So he makes a study. I could care less.” Athletes, managers, and coaches swear that players can get in “the zone,” and be on a run where the game slows down for them. They believe in momentum and think that success can, in fact, be self-reinforcing.

This may be a correct theory – and we’re not saying there are no psychological effects of getting hot and succeeding – but you can’t predict a hot streak in and of itself. In the eyes of an expert statistician, draining six three-pointers in a row is just white noise.

Statistics don’t lie. Numbers can’t be biased.  Tversky’s landmark study has been replicated time and time again, showing that – while players certainly do go streaking – making a successful play or sinking a shot isn’t a reliable indicator of the next shot or play being the same.

How Did They Prove the Hot Hand Fallacy?

To support their research, Golovich, Vallone, and Tversky analyzed the shooting stats of NBA players with the Philadelphia 76ers, New Jersey Nets, New York Knicks, and the Boston Celtics. They found no statistical evidence of any kind of hot hand effect.

They also verified their results with the gold standard of statistical studies: the controlled experiment.

The three researchers designed another experiment where they watched NCAA varsity basketball players shoot free throws, asking a group of fans to observe one player at a time. The observers were also asked to predict the likelihood of the player’s next free throw sinking or missing. Before every shot, the player shooting was asked to rate the likelihood of his shot being successful or unsuccessful. 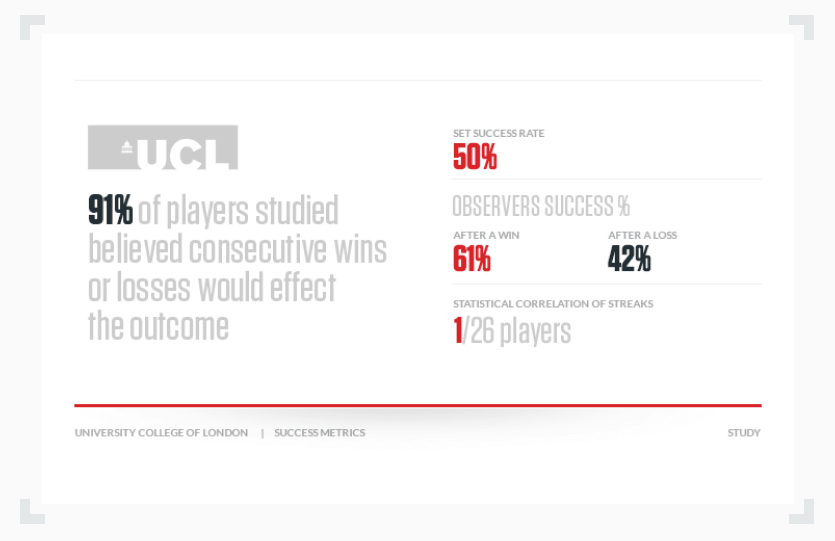 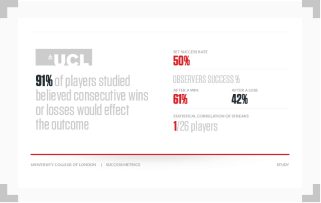 They also found that despite knowing a player had a 50% success rate with his shots, observers thought that the shooter’s shot percentage would shoot up to 61% after he had just sunk a basket, and decrease to 42% after having missed.

However, only 1 out of 26 players actually showed any kind of significant statistical correlation between their shots and their streaks.

They replicated the same study with 3 point shots instead of free throws and got the same results.

The critical finding in their studies was two-fold. Firstly, the research found that, in a controlled setting, both field goal and free throw attempts were statistically independent of each other.

Secondly, they discovered that believing in the player with “a hot hand” didn’t successfully predict whether the following shot would go in or miss. Players themselves can be easily influenced by the HHF.

Why Do We Want To Believe in The Hot Hand Fallacy?

It’s difficult for people to understand randomness and random sequences of events. Our natural tendency is to assign meaning to unrelated events because of the way the human mind works.

We often judge one isolated sequence (like a string of successful free throws) as being representative of a greater pattern, or the norm.

If we turn on a basketball game and watch Andrew Wiggins sink 10 consecutive free throws, it’s easy for us to instinctively imagine that this is the new norm and that he’ll never miss again. At some point, he’s going to regress closer to his career average of .741.

The Hot Hand Fallacy Outside of Sports

The hot hand fallacy applies very strongly to investors. It’s extremely common for investors to overrate the performance of a stock in the short term, and conversely underrate its long-term performance.

A recent example that’s been in the news a ton a lot is the investor speculation which drove up the price of Bitcoin. Many people thought that Bitcoin’s ceiling was limitless because of its incredible growth in such a short period of time. They ignored the fundamentals of its price, and ultimately it crashed back down to earth.

There have even been articles about how the hot hand fallacy applies to kill streaks in Call of Duty.

How Does the Hot Hand Fallacy Affect Our Sports Bets?

Sportsbooks love to prey on bettors who fall prey to the HHF. The main way that the hot hand fallacy affects bettors is in proposition betting. You might not know it, but during games, propositional bets are high volume bets at sportsbooks. These live in-game bets are likely to continue to explode in volume as the global betting market expands.

If, for example, you’re betting that Damian Lillard sinks a third consecutive three-pointer, sportsbooks are likely going to offer odds that are highly unrepresentative of the real probability of this occurring. As we know, the probability of him hitting his third shot in a row won’t be any higher than if he had missed three in a row.  In short, it’s a sucker’s bet.

Given the widely-documented existence of the HHF amongst bettors and the general public, it’s no wonder that sportsbooks like to entice bettors with live betting prop bets. They can quickly bolster their books on the backs of uneducated bettors.

Don’t Be a Square Bettor

One of our 10 critical strategies for becoming a sharper bettor is to bet with your head, not your heart. Knowing that the hot hand fallacy is real and proven by statistics will prevent you from foolishly betting on an event at skewed odds.