Win Big Betting on the Biggest NASCAR Races of the Year 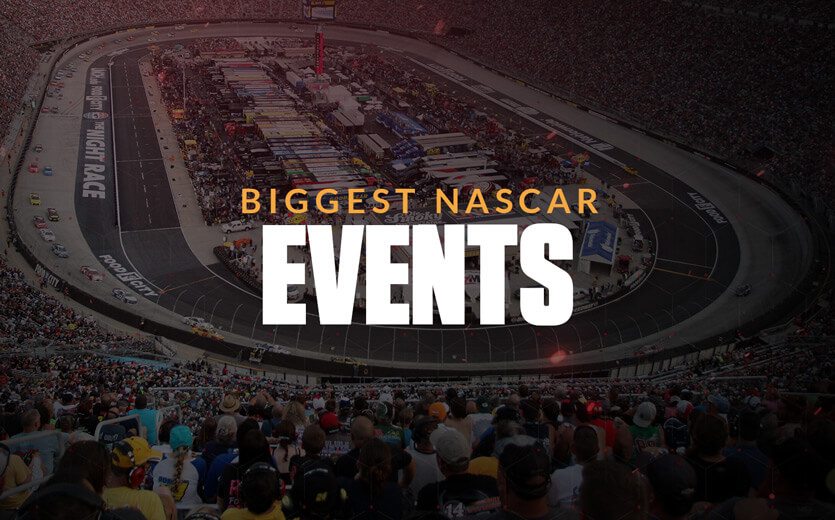 If you’re new to betting on NASCAR, you’ll need to know which races to mark on your calendar. There are 36 races on the 2019 NASCAR Cup schedule, but not all of them draw huge crowds or significant betting volume.

We’ve got you covered, and we’ll introduce you to the most popular and heavily scrutinized NASCAR races you can bet on throughout the season.

Biggest NASCAR Races of the Year

As mentioned above, 36 different races make up the 2019 NASCAR Cup schedule. The season runs nearly the entire calendar year beginning with the first regular season race in February all the way through November.

In terms of how the races break down, there are 26 races that make up a regular season and then a final 10 races that are designated for the Cup Championship Playoffs.

The Inaugural Race of the Season: Daytona 500

While there are a couple of non-consequential exhibition races, the official start of the Monster Energy NASCAR Cup Series every year is with the Daytona 500 from Daytona International Speedway in Daytona Beach, Florida in early February. The 500-mile long race is regarded among the most important and prestigious race (not to mention the fastest) on the NASCAR calendar.

Richard Petty owns the record for the most Daytona 500 wins with seven. Meanwhile, Jimmie Johnson, Denny Hamlin, and Matt Kenseth all have multiple Daytona 500 victories with Hamlin winning most recently in 2019.

It’s tricky to bet this event as it’s the first of the season. What you’re looking for is to look at the driver’s history on the track, since you can’t really determine what each driver’s current form is at the beginning of the year.

The Charlotte 600, which is currently known as the Coca-Cola 600, is the longest race on NASCAR’s schedule at 600 miles. In addition to its extraordinary length, the fact that the amount of daylight available throughout this race changes drastically from early evening into the night adds to the intrigue surrounding it. Those are factors you have to take into account as not all drivers have the stamina to conquer this track.

Kyle Busch dominated the most recent edition of the Charlotte 600, leading 377 of the 400 laps. The Coca-Cola 600 is the third of the four major races that make up NASCAR’s annual Grand Slam. Jimmie Johnson once won this race three years in a row between 2003 and 2005.

The Bristol Night Race, which is currently named the Bass Pro Shops NRA Night Race, takes place in the middle of August on a Saturday night. The second of two Monster Energy NASCAR Cup Series races that take place at Bristol Motor Speedway, the night race definitely stands out as one of the most unique of the season.

There are some key factors to take into account when betting this race such as the fact that it’s a Saturday, which means there’s one less day of preparation. The majority of races are on Sunday, so the drivers (and their mechanics) have a full week to prepare. Also, being a night race changes the dynamics of heat, speed, and daylight as those can impact the speed of the track or visibility for the drivers.

The Busch brothers have won the last two races at this track with Kyle winning in 2017 and then Kurt winning in 2018. Darrell Waltrip leads all drivers with seven career wins in the Bristol Night Race.

Indianapolis Motor Speedway hosts the Brickyard 400 on an annual basis. Referred to as the Big Machine Vodka 400 at the Brickyard for this season, the fact that this is the final race heading into the Cup Championship Playoffs adds to its already existing prestige.

That being the case, it’s really important to note driver motivations when betting this race. Some drivers might need the win here to qualify for the playoffs while others might already have their spot locked up. Obviously, bettors need to factor in the unique motivations of drivers based on their previous records.

Taking place in early September, the Brickyard 400 spans 400 miles over 160 laps. The term “Brickyard” is a reference to the nickname historically used for Indianapolis Motor Speedway, which is based on the fact that the course at the time was made of crushed stone and tar.

Jeff Gordon owns the all-time record with five-career Brickyard 400 wins. Jimmie Johnson, Dale Jarrett, Tony Stewart, and Kyle Busch are the other drivers that have recorded multiple victories in the Brickyard 400.

The Bojangles’ Southern 500 at Darlington Raceway in Darlington, South Carolina is now the penultimate stop on the Southern 500 regular season schedule. Raced over 501 miles that are spread over 367 laps, the Bojangles’ Southern 500 is one of the most difficult races on the schedule. Part of the challenge is that track has an unusual shape. Unlike most NASCAR courses that are simple ovals, the Darlington Raceway is more of an egged-shape course with noticeably rough pavement. Take a look at the driver history at this track if you’re betting this race, as some drivers thrive at Darlington while others struggle.

Darlington is the oldest of the superspeedways, which is the biggest reason why it is so difficult to navigate. While there are two NASCAR Cup races held at Darlington every year, the Bojangles’ Southern 500 was moved from April or May to September in 2015.

Jeff Gordon has won this race a record six different times spanning from 1995 through 2007. Meanwhile, Brad Keselowski is the defending Bojangles’ Southern 500 champion after winning this race in September of 2018.

Dating back to the 2002 season, Homestead-Miami Speedway in Homestead, Florida has represented the final stop on the Monster Energy NASCAR Cup Series playoff schedule. This one is for all of the marbles. If you’re betting it, keep in mind what drivers need to accomplish to win the championship. They might not need to win the race to claim the title depending on the points standings.

Recognized as the Ford EcoBoost 400, this race is contested over 267 laps that span 400.5 miles long. Greg Biffle and Tony Stewart have each won this race on three different occasions. Meanwhile, Joey Logano is the defending champion at Homestead.

What Is NASCAR’s Grand Slam?

The NASCAR Grand Slam refers to winning all four of the Monster Energy NASCAR Cup Series majors in a calendar year. However, the races that make up the Grand Slam have changed over the years.

The current consensus is that the Grand Slam is made up of the Daytona 500, the Geico 500, the Coca-Cola 600, and the Bojangles’ Southern 500. Different drivers have given their own takes on which races they think should make up the annual Grand Slam over the years, but the consensus is on the four races highlighted here.

While no driver has ever managed to win all four races in the same season, there are a handful of drivers that have absolutely dominated these four most popular races over the years.

The next closest driver in terms of Grand Slam wins is Richard Petty, who won a record seven times at Daytona as part of 11 career Grand Slam titles.

Jimmie Johnson, who is the leader in Grand Slam titles among active drivers with nine, has four wins at Charlotte, two wins at Daytona and Talladega and then one win at Darlington.

The Monster Energy NASCAR Cup Series playoffs are made up of 10 races that span multiple stages. 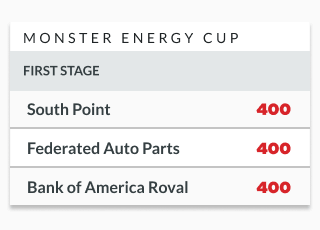 All 16 drivers that qualified for the postseason will compete in these races. After that, the field is narrowed down to the top 12 drivers in the standings for the second stage. 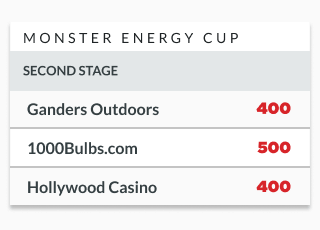 Once again, the field is cut down again following the third of three races in this stage with only eight drivers advancing to the third stage. 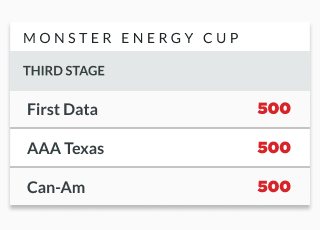 This stage is the Round of 8 and once the third race is completed (the ninth playoff race overall), only the final four drivers advance to the championship race.

This race takes place at the Homestead-Miami Speedway. It features the final four contenders competing for the championship. The winner of the season is crowned at the end of this race.

NASCAR has done an excellent job of creating a structure that works for both casual fans as well as the hardcore fans. With so many exciting races to look forward to every single season, it’s no surprise that the sport has maintained a very high level of popularity over the decades.

Now that you’re familiar with the biggest races, check out our how-to section to learn more about betting on NASCAR.