How to Bet on NASCAR: Get a Quick Start on NASCAR Betting 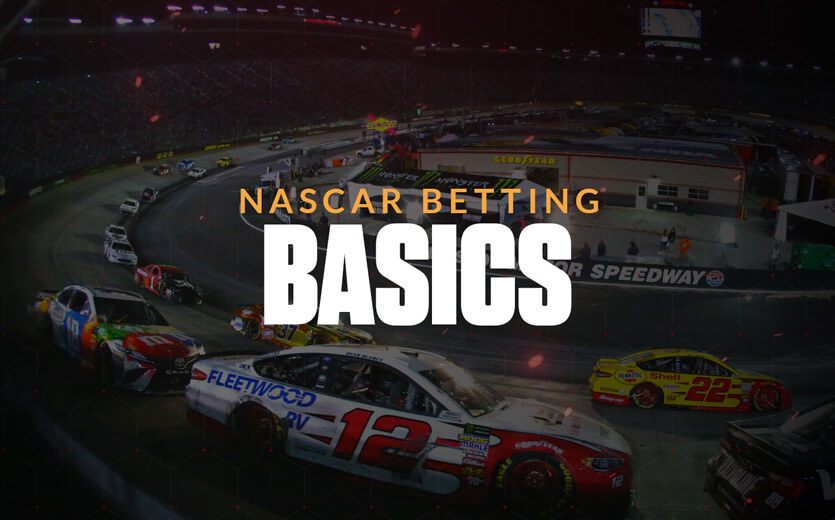 There’s an instinctual excitement when we hear the roar of an engine. That’s part of the draw to NASCAR. Being one of the top motorsport leagues in the world, NASCAR draws the most betting action stateside.

If you’ve never bet on NASCAR, we’ve got the full rundown to get you started with the basics and steer you all the way through to strategy. Here’s everything you need to know about how to get behind the wheel of NASCAR betting.

How the NASCAR Season Works

The official start of the NASCAR season is in February with the Daytona 500. There are a couple of exhibition races before that (The Duel 1 and The Duel 2), but the actual season begins with what’s known as The Great American Race, or more commonly known as the Daytona 500.

Oddly, the Daytona 500 is what’s considered the Super Bowl of NASCAR, so the season starts at somewhat of a climax.

The season then continues all the way through the fall with the Monster Energy Cup playoffs taking place in September, October, and November.

Throughout the course of the year, drivers compete for wins and points in order to lock up their spot in the playoffs. Points are mostly awarded for winning the races but they are also doled out for different things like qualifying position, laps led, and finishes in the Top 10.

As we get closer to the playoffs, it’s important to note whether a driver has secured their position. Depending on their position, drivers may consider finishing in a good position slightly more important than going all-out for the win. This obviously provides unique considerations for bettors, which we’ll dive into more later on.

In other words, drivers may not need to be very aggressive to get the win, as sometimes points awarded for the position they finish in are enough. At the same time, there are also situations in which it’s absolutely critical to win the race—nothing less will do.

It’s important to understand these different situations in order to get a good idea of the mindset of each driver heading into every race.

Playoffs in NASCAR Don’t Have a Conventional Structure

There are a number of ways to qualify for the playoffs. There’s a “win and you’re in” option, which automatically qualifies race winners. Beyond that, drivers gather point throughout the season with each race, and those who finish in the Top 16 also qualify.

Once the playoffs begin, all 16 of the eligible drivers compete in elimination events and the field shrinks after every set of three races (four drivers are cut each time). Then the final round is the Championship 4 where the final four compete for the title.

How to Read NASCAR Odds

NASCAR odds are very easy to understand. For each race, there are odds assigned to each driver in different categories, ranging from odds to win the race to odds to finish in the Top 5 or Top 10, or head-to-head bets. Let’s use the following example: 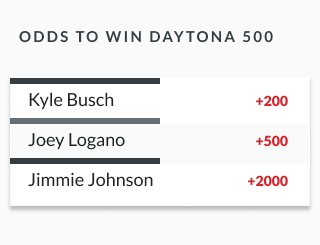 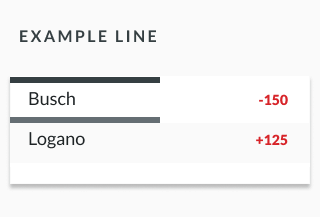 In rare cases where both drivers are assigned a “-”, the driver with a number closer to 0 is considered the underdog.

Nascar is a unique sport even within the automobile racing circuit, and as such it’s accompanied by its own range of unique bets.

Odds to Win the Race

The most straightforward type of wager that you can place on a NASCAR race is betting on a driver to win. Almost every single driver entered in the field will be assigned odds based on their perceived likelihood to win. Some sportsbooks might list a few drivers who are not visible on the board in a “Field” category.

To place this type of bet, all you need to do is decide how much money you want to risk to bet on that driver to win.

This is sometimes trickier to predict (since there are so many drivers in the field), but you’ll get a big payout if you’re correct.

This gives you a greater chance of winning but naturally, your payout will be smaller since this result is more likely to occur.

Looking a little deeper into the NASCAR odds, fans can also place bets on head-to-head markets. These types of wagers are markets set where one driver is pitted against another.

In this situation, you are simply betting on one driver to produce a better result. They don’t have to win the race outright; they merely need to finish in a better position than the other driver.

A lot of bettors like this prop as they can look at track history, current form, and who performs well at the particular track then bet them versus someone who is not in as good shape.

Below, we’ll draw your attention to some basic NASCAR betting strategy, to keep you attuned to what you should be looking for when you’re trying to get a leg up on your bookmaker.

When it comes to betting on NASCAR races, the most important criteria that you should keep an eye on is current form. NASCAR drivers tend to run hot and cold, so you definitely want to look up either on ESPN, NASCAR.com, or wherever else to see how the driver has performed recently.

Take a look back through the last month and see: has the driver won a race? Has he been close a couple of times with Top 5’s or Top 10’s? How are they doing in qualifying and have they led any laps during the race? If that’s not the case and they’ve been finishing outside of the Top 10 and qualifying poorly, you’ll want to avoid them. It could be an issue with the driver himself or their car/engine that just isn’t performing. Either way, current form is a big tell.

Another important factor to keep in mind is the track that the drivers are racing at. There’s the general assumption that all NASCAR tracks are the same and the drivers only turn left, but there are small nuances to each individual track. Every single track is different, and each presents different betting considerations as a result.

Some keys to look for is whether the race taking place at a superspeedway or a road course, what the distance is of every lap around the track and how many laps is the race structured to include.

By understanding the different tracks and how they vary we can get a much better understanding of what to expect in terms of how the race will play out.

Driver History at the Track

The key to understanding the importance of a track is to make sure that you have a strong understanding of driver histories. It isn’t difficult to track which courses that drivers excel on and which they tend to struggle on. All you need to do is use a site like the official NASCAR page or a good tool like DriverAverages.com in order to look up driver histories.

Additionally, you’ll also find some excellent driver history reviews to show you their whole history of how they’ve performed there, what position they’ve started in and what’s their average finish. All of that information is crucial as the past can be a tell of the future with each individual track.

A lot of bettors love the strategic considerations and the potentially big payday of predicting the outright winner of a race, but that is a tough prediction to make with any kind of regular accuracy. A much wiser bet with NASCAR is to bet on head-to-head matchups.

These wagers allow you to leverage the information you have about both the drivers and the tracks in order to narrow down who thrives at the track, and who might not fare so well.

For example, let’s say that you really like Busch to win a race. At the same time, you really don’t think that Bowyer has a very good chance at all to win.

Are you better off betting on Busch to win the race outright? Or are you better off using the knowledge you have of both drivers in order to play the head-to-head matchup and bet on Busch to produce the better result than Bowyer? The answer is the latter, even if the payout is smaller. There are so many more things that can go wrong when your driver has to win the race outright.

Now that you know how to bet on NASCAR, you’ll be ready to step on the gas and place some bets when the big races roll around.

For more articles to improve your sports betting skills, check out the full array of content in our how to bet on sports section.