Head-to-Head Bets Let You Pit Players Against One Another 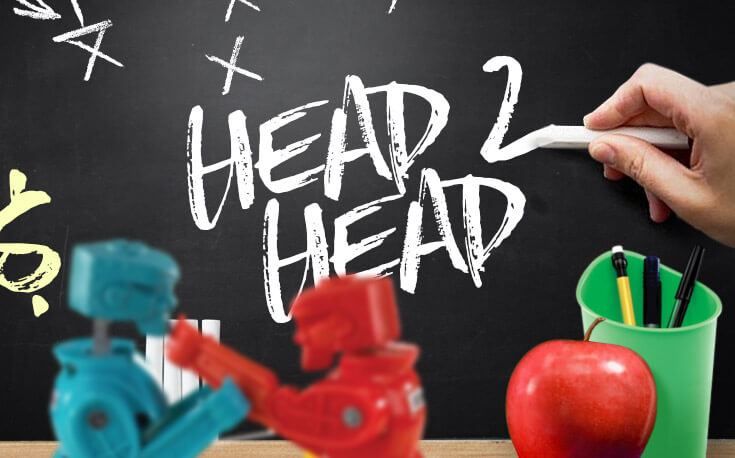 Team betting is what generates the most interest from the average bettor but it’s important to know the ins and outs of head-to-head betting too as there’s plenty of value in those lines.

Head-to-head betting doesn’t operate by the same rules as team betting and can occasionally be confusing. As such, we’ve dedicated a guide to walking you through head-to-head wagers, starting with a basic explanation of how the bet is graded and proceeding to alert you to the different types of head-to-head betting options you’ll encounter at your sportsbook.

What Are Head-to-Head Bets?

Head-to-head bets are a type of wager that (usually) pits two individuals against each other. We’ll go over the applicable aberrations below, but in general, that’s what head-to-head bets refer to.

Some common examples of head-to-head bets are golf or NASCAR matchups. In these cases, you’re predicting which golfer or which driver will have a better finish. The golfer or driver doesn’t have to win outright; they just need to finish in a better position than the person they are matched up with for this prop.

The lone exception is that sometimes you’ll see head-to-head matchups amongst teams. For example, which team will go further in the NCAA Tournament or which NFL team will win more games in the regular season? These are also called head-to-head props but in general, head-to-head bets refer to individuals going up against other individuals.

Why Are They Better for Bettors?

A lot of professional bettors prefer these types of bets compared to team-versus-team bets because there are fewer variables in play.

For example, a head-to-head tennis match means that you’re banking on one player delivering.

On the other hand, there are many moving parts in a team-versus-team setting because you need the offense, defense, coach, and all of the different areas of the team to sync up together for a good performance.

For example, in football, success is the result of a synchronous effort from the offensive line, the quarterback, the running back, the receivers, the coaching staff, etc. It all has to come together. That means there are more areas where something could go wrong.

When to Avoid Them?

The tricky part with head-to-head props is they typically focus on sports that are not among the four major ones (NFL, NBA, NHL, and MLB). The challenge is that the casual bettor tends to know much more about those sports than the fringe ones.

If you’re not familiar with NASCAR, golf, or tennis, you don’t want to dive in and start betting these matchups just because someone told you they’re a good bet.

Make sure you do your homework for these just as you would if it were a matchup of two NFL teams. Check the trends, read previews and know the series history before you put down your hard-earned dollars.

Sports Where You Can Bet Head-to-Head

Head-to-head betting lends itself particularly well where individual players and personalities are competing against one other, but they can apply in a wide variety of contexts. Read on to learn which sports you can place head-to-head bets on.

Betting on NASCAR can be tough to predict in terms of who’ll win the race outright. However, head-to-head matchups give you a good opportunity to make money. Find a driver who is in good form and has a strong track record at the current raceway, then try to find a matchup where he’s pitted against a weaker driver.

Similar to NASCAR, golf is a tough sport to predict the outright winner. However, head-to-head matchups will make your betting life much easier.

In head-to-head golf matchups, see how the course plays and find a golfer who suits the course well. After that, look at the unique course history to see how they’ve performed there. Ideally, you’re looking for an edge in a matchup where one golfer has a much better track record than his opponent.

Almost all tennis betting is considered head-to-head. When betting on tennis, take note of the playing surface of the matchup (grass, hard courts, or clay) and then factor in current form. Also, the history between the two players is always worth your consideration, as some players tend to fare well against certain players.

There are times when the major sports will post head-to-head matchups between players in terms of performance stats. For example, in Super Bowl betting, you’ll see props asking which quarterback will throw for more yards.

In baseball, you might see something like who’ll hit more home runs during the World Series or in basketball, it could be points scored. These bets are rare and usually only available for major events like the championship round.

Not All Sportsbooks Carry Head-to-Head Bets

While these aren’t a complete novelty, you’ll find that a lot of sportsbooks don’t carry all types of head-to-head bets. When it comes to tennis betting, you’ll always find head-to-head bets available. However, golf and NASCAR head-to-heads are somewhat of a luxury beyond the generic “who’ll win the event” and Top 10 props.

If these are important to you, double-check with the sportsbook which head-to-head lines they offer and how frequently they post those odds.

As mentioned, most major sports don’t offer head-to-head props very regularly, but one type of head-to-head that you’ll frequently see is the season-long, futures props.

These are props that will pit two players against each other in terms of their performance (accumulated stats) over the entire course of a season.

For example, in the NHL you might see an Alex Ovechkin versus Sidney Crosby prop on who’ll have the most points by the end of the season. Or in the NFL, it might be Patrick Mahomes versus Jared Goff with passing touchdowns over 17 weeks.

A number of sportsbooks will have these types of bets up in the preseason and the weeks leading up to the season. Keep your eye out for them because more often than not they’re only available for a limited amount of time and will close before the beginning of the season.

One Other Type of Head-to-Head Betting

Just one last note on head-to-head betting is that it sometimes is used to denote a matchup of two teams versus a three-way moneyline. Often times in Europe, a head-to-head line will be used to indicate that you’re looking to bet specifically a moneyline between two-teams and not the line with three options. 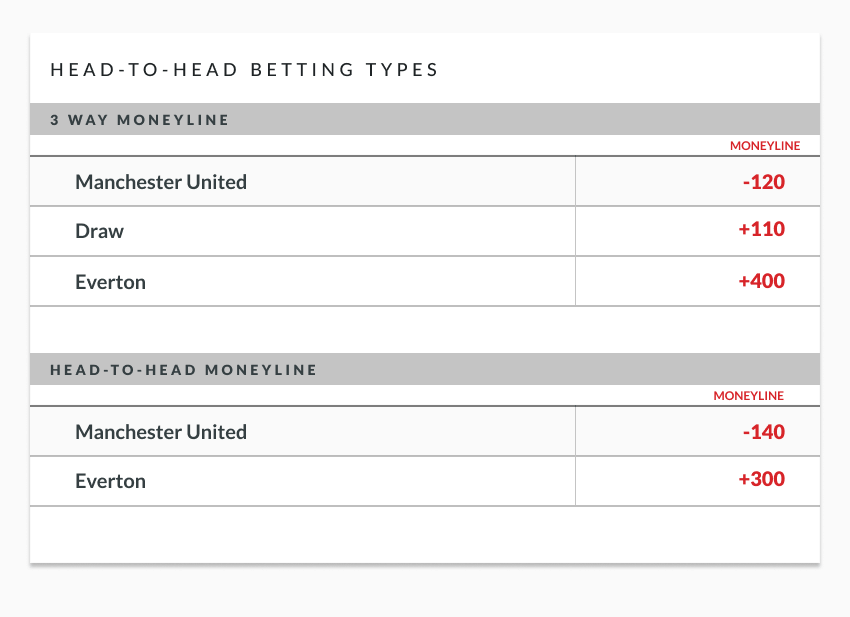 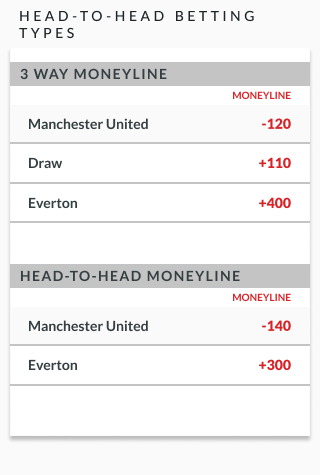 As you can see, a three-way line isn’t a true head-to-head matchup as the option for a draw is now a factor. If you say you’re looking for a head-to-head line, that would mean you don’t want the draw included, and you’re seeking an alternative to a three-way moneyline.

Now that you know how to make head-to-head bets, it’s time to get started. Login in to your sportsbook account and have a look at the lines to see if you can find some value. And if you’d like more articles on the basics of betting or basic betting strategy, check out our how to bet on sports section.