How to Calculate Player Efficiency Rating (PER) 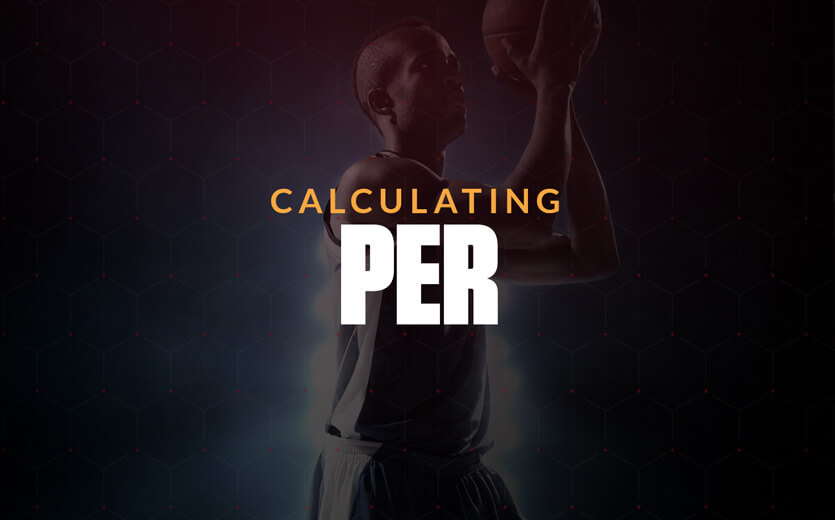 Understanding how to calculate PER and use it to bet on basketball is a key step for more advanced NBA bettors.

If you’ve watched the NBA or handicapped basketball games, you’ve probably seen the stat PER referenced a few times. While you might generally know that this is an all-encompassing metric that evaluates a player’s production, you might not know all the ins and outs as to why that’s the case.

In this article, we’re going to take a look at PER, explain what it is, and examine how it is useful to handicappers betting on basketball.

The Player Efficiency Rating was a creation of ESPN basketball columnist John Hollinger. He was slightly ahead of his time with advanced stats in the NBA and ended up earning a job in the Memphis Grizzlies front office.

The idea behind this stat is to put an all-encompassing value on a player’s production. You might ask why we need such a thing, but the answer is two-fold. In baseball – which is arguably the leading sport in terms of advanced stats – they have a number called ‘WAR’ or Wins Above Replacement that’s very useful to quantify a player’s importance.

Secondly, standard stats in the NBA can be misleading as a player might score 25 points per game but simultaneously be a big liability on defense and elsewhere. PER sums up a player’s positive accomplishments and detracts the negatives produced to come up with a per-minute rating on the player’s performance on both sides of the ball.

How Is PER Calculated?

Without going all Matt Damon circa Good Will Hunting on you (and getting into some extremely complicated mathematical equations), we’ll try to explain how Player Efficiency Ratings are calculated in the most basic of terms.

In short, the formula below takes 12 different stats available for any specific player. Those stats are weighted differently (field goals made will be worth more than a defensive rebound, for example). Plug in the player’s values in each category to run the calculation.

In simpler terms, PER scores include basic statistics like field goals made, steals, three-pointers made, and then subtract things like free throws missed, turnovers, and fouls.

Hollinger has clearly given more weight to the categories that he feels are more important and less weight to the stats that are slightly less of a factor. His numbers are widely considered to be the most accurate, and his formula has become the league-wide standard used to calculate PER.

Hollinger’s method of calculating PER starts with finding unadjusted PER using this formula: 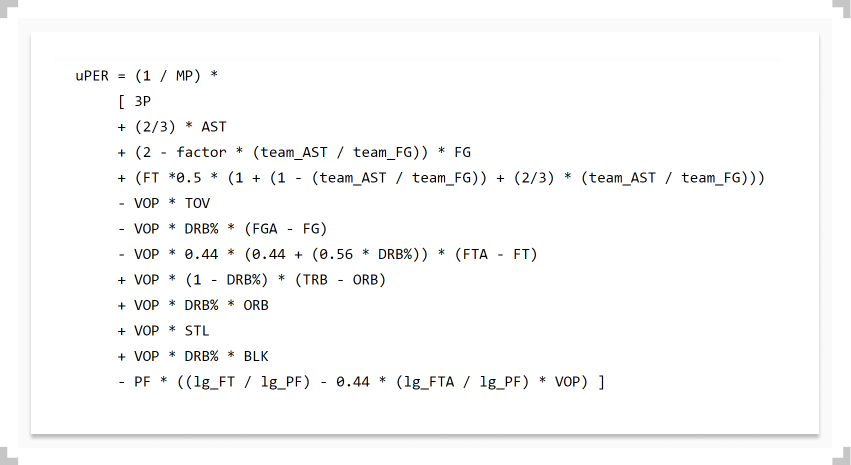 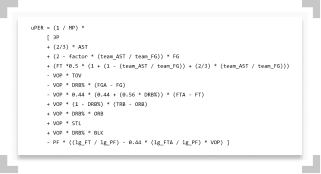 Hollinger then makes adjustments to each player’s PER score to account for their team’s pace, and sets the league average PER to 15.00 every season to standardize the metric.

Don’t worry if that all sounds complicated. Here’s a simplified version of the PER formula: 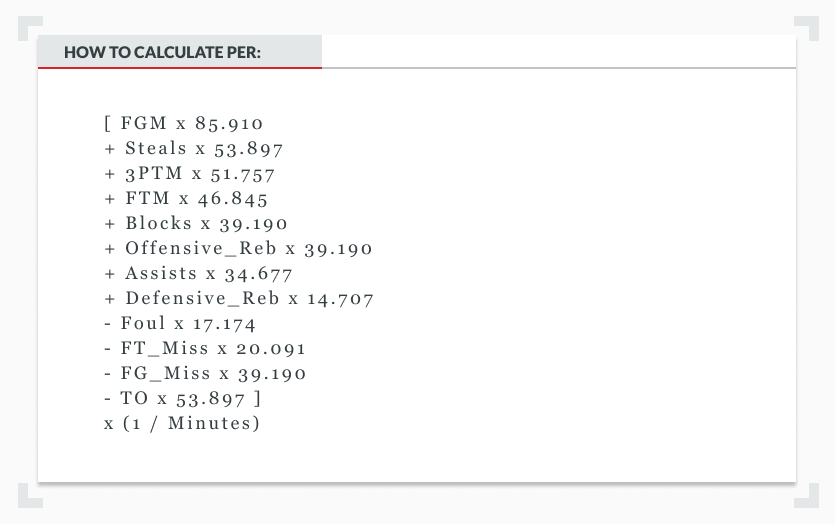 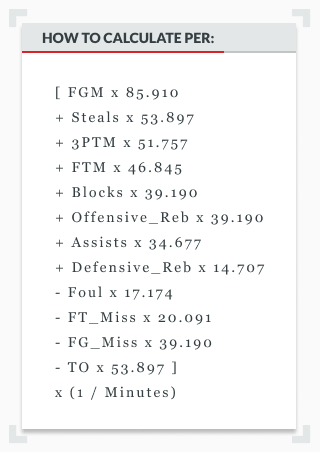 The good news is that you never actually have to do any calculations yourself. Every single player in the NBA has a profile page on ESPN and each of those profile pages will show the player’s PER.

*Please note that different media outlets use varying formulas and adjustments when calculating the PER values published on their sites. The formula listed above is a simplified version that uses linear weights.

The Flaws of PER

While PER is arguably the most comprehensive NBA player metric, there are some flaws to keep in mind.

First, PER is a metric just like any other mathematical model. We’ve plugged in a bunch of stats into a formula to spit out a number on a player. Quantifying performance is helpful, but it doesn’t consider intangibles like leadership or clutch scoring.

A good example is a player like Derek Jeter in baseball, who maybe didn’t have the best stats of all-time but when he was needed – either for a key hit, a stolen base, or an important defensive play – he pulled through. Many good players are good due to important intangibles that fall through the cracks of stats like PER, WAR, and others.

PER also fails to consider assisted points versus unassisted field goals. For example, let’s say a player is just scoring on alley-oops versus a player who is creating on his own opportunities.

There are catch-and-shoot players like three-point specialists that might grade out well here, but they’re not the same as someone who can drive, slash, and break down a defense to create their own shot. PER doesn’t distinguish between the two.

Stats like Adjusted PER (APER) have since been created to address these shortcomings. APER differentiates between assisted and unassisted field goals and also takes into account charges taken. Players like Toronto’s Kyle Lowry clearly benefit from this adjustment.

A common criticism of PER is that defensive specialists are often undervalued in the calculation. Unfortunately, there just aren’t many reliable defensive stats to input into the formula. Good defense is harder to quantify.

All that said, PER provides a decent snapshot of where players stand in relation to one another, and top players can typically be found near the top of the list.

How Calculating PER Helps You Handicap Basketball Games

Now that you have a good idea of what PER is and understand some caveats, why is PER important for handicapping?

It’s a fair question considering basketball is a team sport and PER is an individual metric. What are we supposed to do: add the total PER of both teams and bet on the team that has the highest collective PER? Of course not.

A metric like PER can be very useful to basketball handicappers in the right situation, though.

We don’t advocate relying on PER alone, but PER is a key component of a complete diet looking at points per game, rebounds per game, and more to get a full picture of each player. When looking for value in NBA betting lines, PER could be one piece of your logical reasoning for making bets on a certain team.

The Best Time to Use PER

Arguably the best use for PER in basketball betting is determining the value of injuries. Often a player might sit out with load management or with some type of injury and while we see the betting line get adjusted, we’re not always sure how much value that player adds or subtracts with their presence.

Sure, it’s clear that if LeBron James plays or doesn’t, it will have a huge impact. But what about a role player who comes off the bench or a good rebounder? Is that a big loss or can the team survive the night without them? PER will typically uncover the value of players who are otherwise overlooked.

Using PER can help identify how efficient and effective role players are in their limited minutes off the bench. Because PER is a per-minute calculation, it’s not dependent on playing time. As such, taking a look at injury reports and PER can help you make conclusions that can provide an edge on the spread, moneyline, or total.

A great example is the Los Angeles Clippers in the 2019-20 season. Obviously, someone like Kawhi Leonard is key to their success. But who would guess that center Ivica Zubac would have a PER (21.75) that was slightly higher than Paul George’s (21.14)?

This realization doesn’t necessarily mean he’s a better player – few would argue that – but it does suggest that Zubac’s absence could have a bigger impact on the game and betting line than you might think.

Keep an Eye on PER

Now that you have a better understanding of how to calculate PER and why it’s useful for handicapping basketball, you’ll know what to do with the numbers when you see them.

For more articles like this, visit our how-to section to keep advancing your sports betting knowledge.