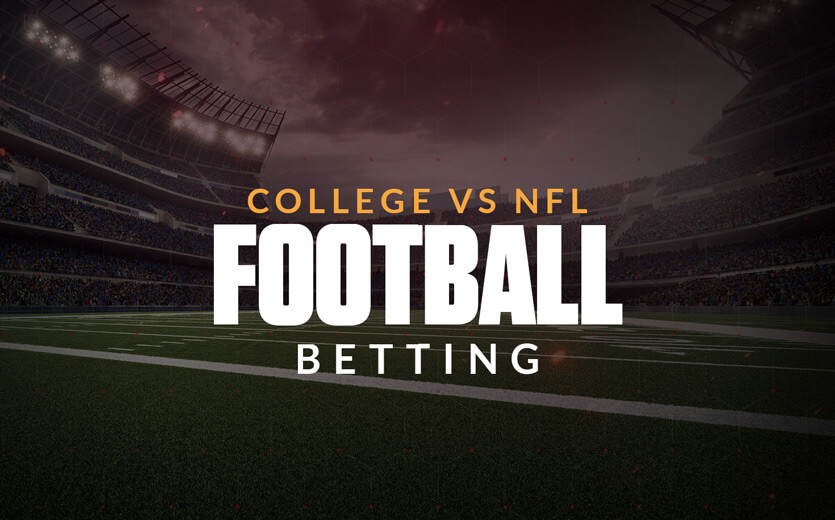 College football vs. NFL betting presents more differences than many people initially realize. If you’re used to the limited schedule and extensive media coverage that come with the NFL, betting on college football can be a little intimidating. The betting card is much longer and some of the point spreads are massive. Not to mention you may not have heard of half the schools you see listed at your sportsbook.

To demystify the college game, we’ve broken down some of the key differences between betting on college football and the NFL. Here are four key considerations for sports bettors hoping to capitalize on both levels of play this season.

College Football Is Much More Volatile

NFL players are professional athletes, and most of them have years of experience playing in emotionally charged, high-pressure situations. Regardless of their talents and athleticism, college players are typically 18 to 22-year-old students who have significant distractions off the field and are more likely to be affected by their emotions. Some of these athletes are fresh out of high school, not seasoned pro football players.

Just because a college team was excellent last week doesn’t mean they won’t fumble the ball 93 yards this week. The best teams in college football control this volatility, but even they aren’t immune. You are going to see things that just don’t happen in professional sports.

The biggest difference between college and NFL football comes from the way talent is distributed among teams.

The NFL holds a yearly entry draft, during which the most promising college players are distributed to the least successful teams. College football does not have a draft and, when it comes to talent distribution, the opposite is true. The most talented players are drawn to the most successful programs. When top recruits all want to play for the likes of Clemson, Georgia, and Oklahoma, vast gulfs of talent emerge over time.

When the best team in the NFL squares off against the worst team, there isn’t a huge difference in terms of the talent you see on the field. When the best team in college football squares off against even an average team, things can quickly start to look like a “boys vs. men” matchup. Moneyline odds of -2000 of or shorter are not uncommon for favorites in college football. This is particularly true when top Division I teams like the Alabama Crimson Tide or Ohio State Buckeyes are playing lowly underdogs.

Betting on college football requires you to be comfortable with much bigger spreads than those you’ll see on NFL games.

The biggest spread in National Football League history was set for a 2013 game between the Denver Broncos and the Jacksonville Jaguars, which opened at 28.0 points – a huge anomaly. Most weeks, you won’t see an NFL spread bigger than 13 or 14 points. By comparison, week 1 of the 2021 college football season saw nine games with spreads larger than 28.0

Betting on college football requires you to get comfortable handicapping much bigger spreads than those you’ll see in NFL betting. Remember that this doesn’t necessarily mean games are less predictable – there’s just a much larger skill delta between NCAA teams.

College Teams Are Less Consistent Over the Years

College football teams lose roughly a quarter of their roster every single year. Between graduations, players leaving for the NFL, transferring schools, becoming academically ineligible, or simply quitting football, it’s an ever-changing cast of characters at even the top college programs. Teams might lose most of their star players after winning a CFB national championship, which would be rare for Super Bowl-winning squads.

Coaching is also a revolving door in NCAA football, as coordinators and head coaches are fired, hired away, promoted, demoted, and endlessly turned over. While the NFL isn’t exactly a bastion of stability in terms of rosters and coaching staff, you can (for example) have the same quarterback for more than four years.

One of the best metrics for success in college football is returning production. Look for teams fielding a lot of dependable juniors and seniors.

The turnover in NCAAF creates year-to-year shifts in team quality that can, at times, be startling. A team that was 10-2 last year might go 4-8 this year. A team that was 4-8 last year may become a favorite for a college football playoff berth this season. Wagering on a team based on how they performed last year is, to put it lightly, inadvisable. Sportswriters love to construct pre-season ranking for college ball. However, they’re not something to put your money on, and it pays to be cautious with futures bets.

This reality also means that one of the best metrics for success, particularly early in the season, is comparing last year’s performances with returning production. Look not only at how well a team performed last year, but how much of that team’s core is back on the field this season.

Even for mediocre college teams, returning production is an asset. Regardless of how well they played the year prior, returning players bring a sense of predictability and experience to teams. Look for teams fielding a lot of dependable juniors and seniors to out-perform squads of highly touted freshmen and sophomores.

In the NFL, most teams play a broadly similar offense, and defensive strategies are similarly consistent. In college football, there is enough variation between teams to make strategies unrecognizable from each other.

Performing well against an air-raid team one week doesn’t mean much in terms of your abilities against a triple-option team next week.

Understanding how different styles of play interact with each other is critical to making good bets on college football. Building familiarity with college teams takes some time. The rapid turnover of coaching staff results in a constant evolution of strategy that can be hard to keep up with. 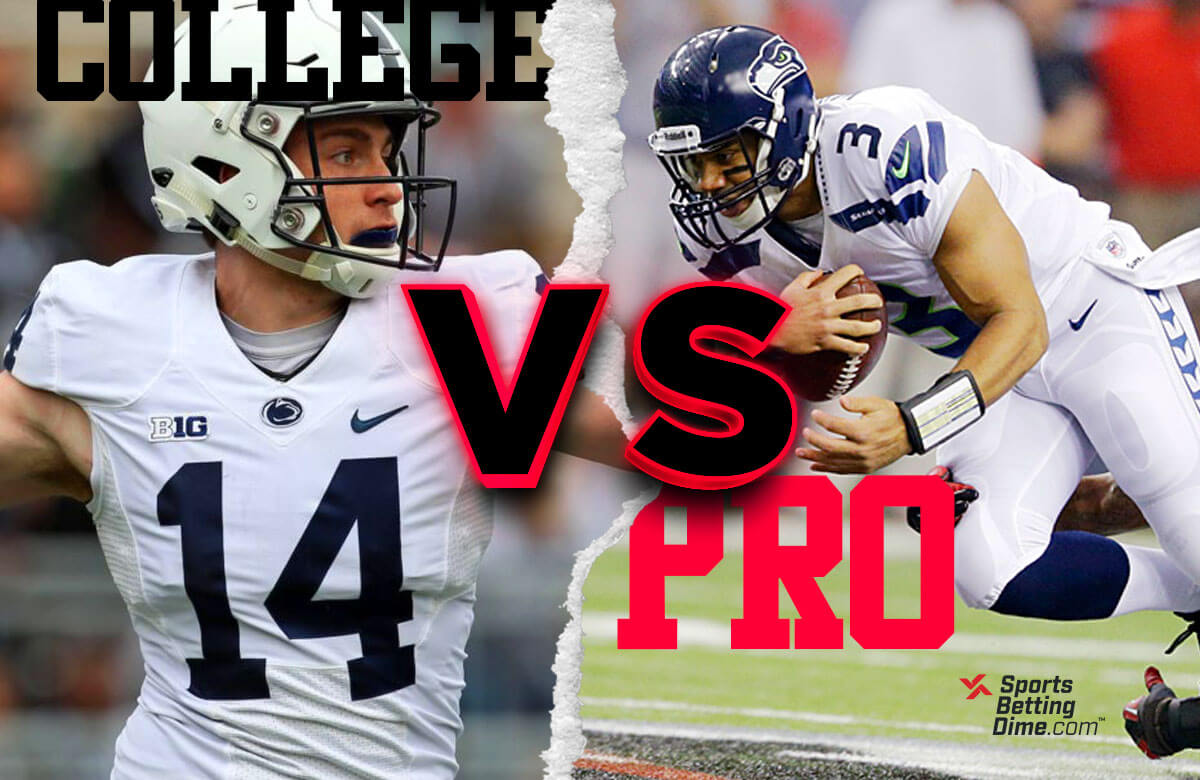 College Football or NFL: Which to Bet?

With so many games each week, it’s much harder for betting sites and oddsmakers to accurately handicap every college game. If you’re willing to take a chance on some more obscure matchups, it’s easier to find value on college betting lines than those for the NFL. That said, if you’re looking for predictability, NFL powerhouse teams tend to be safe bets.

Choosing between betting on college or professional football comes down to personal preference. We recommend trying your hand at both with insights from the football articles in our sports betting how-to guides. You can find everything from how college football rankings work to tips for Heisman Trophy betting.

On Louisiana sports betting apps, you can now bet on both NFL and college games.

Lastly, there’s one other key NFL vs. college football difference to keep in mind: some states have restrictions for betting on college sports. States like New Jersey, Illinois, and New Mexico do not allow wagers on in-state college teams. On the flip side, many states are very permissive towards college sports betting.

As always, follow the law, bet within your limits, and enjoy the action this football season!