Proven NBA Betting Systems: Which One Is Right for You? 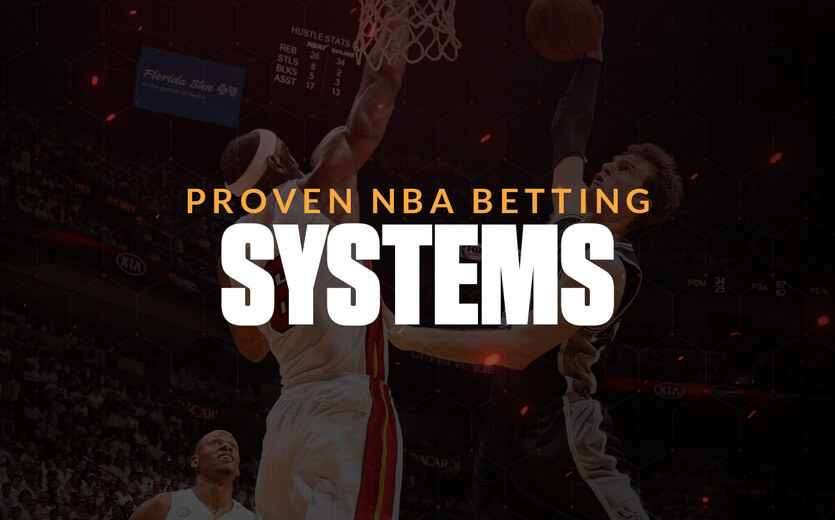 Basketball and betting have more in common than you might think. In order to be successful at either pursuit, it helps to have a proven system. In the case of basketball, having a reliable offensive scheme that you can roll out every game regardless of the matchup gives you a leg-up. Think Mike D’Antoni’s free-flowing space-and-pace attack or Jerry Sloan’s nearly unbeatable pick-and-roll offense from the 1980s and 90s.

When it comes to betting, you can gain the same sort of advantage by having a tightly defined set of rules that you can apply to every single game regardless of who’s on the court.

Fortunately, you don’t have to create your own betting system from scratch. There are already several established strategies that you can try on for size when you lay down wagers on your favorite teams, and there’s no rule against pilfering from the playbooks of those who came before you.

We’ve included some of the most reliable systems and money-management strategies below, along with insights on how to use them. When combined with an understanding of the game and applying them with real time NBA odds, these systems can help turn even rookie betters into all-stars.

Few strategies are easier to learn and apply than the High Totals System created by Allen Moody, a sports-betting professional and the author of Becoming a Winning Gambler and Sports Betting Basics. Moody discovered that sportsbooks often underestimate game totals for NBA non-conference games, and began taking the over on all games with an over/under of 220 total points. It’s a simple strategy, but it paid off handsomely as he was correct 63.5% of the time for all games meeting that criteria from 2004-05 to 2008-09.

Those kinds of games were rarities a decade ago, but they’re becoming more common now as teams push the pace and drain more three-pointers. Back in 2004-05, NBA teams scored an average of 97.2 points per game. That number jumped to 100.0 in 2008-09 and rose all the way to 105.6 in 2016-17. Sportsbooks have become savvy to this trend, but there’s still value to be found by taking the over in games with particularly high total-point projections.

When an NBA team wins by 15 or more points, you might think that they’ve got momentum and will win their next game by double-digits as well. However, the opposite is usually true. The number crunchers at Sports Insights have found that home favorites of ten points or more who are fresh off of 15-point victories beat the spread just 42.5% of the time.

Teams that hammer their opponents one game are unlikely to do so the following night.

In other words, teams that hammer their opponents one game are unlikely to do so the following night. That statistical drop off could be the result of player fatigue or overconfidence or a result of the oddsmakers overreacting to the previous game. Whatever the reason, there’s money to be made by betting against a team that just wiped the court with its previous opponent.

The Bounce Back System

On the flipside, NBA teams coming off of poor offensive performances have a remarkable knack for bouncing back during their next home game. Bet Labs looked at 250 games in which home teams were coming off a poor offensive performance (though they did not expressly define “poor”) and found that their next games surpassed the projected point total nearly 62% of the time. Must be the power of home cooking.

When doing your homework, look for good teams that shot under 40% from the field in their previous outings and then bet the over on their next home game.

The Three in Four System

The NBA has gone out of its way to reduce the number of back-to-back games in recent years, but it isn’t atypical for games to occur in which both teams are playing their third game in four nights. The experts at TheSportsGeek.com found that teams playing under this scenario exceed the projected point total 58.8% of the time.

The most likely explanation is that defense takes far more effort than offense, and most players play D with far less intensity when they’re tired. Whatever the case, you’d be well advised to pick the “over” when this scenario presents itself on the schedule.

We all know that NBA teams struggle to win the second game of back-to-backs, but they don’t all struggle at the same rate. The analytics specialists at numberFire conducted a fascinating study in 2016 in which they examined the effects of back-to-backs on teams that were above and below .500 in the standings.

Teams playing the second game of a back-to-back on the road were 18% more likely to lose.

These are invaluable insights to consider when making your next bet. You may also want to consider a team’s average age, its pace of play, and whether the team has had to adjust to multiple time zones during its latest stretch of games. All of these factors can cause a tremendous drop off from one game to the next.

Imagine being able to drastically reduce your risk of loss in every bet you make. You can, by properly employing the Tunnel Betting System. This sneaky strategy takes advantage of the fact that competing sportsbooks often offer different game totals while still offering the same odds.

For instance, let’s say that one sportsbook has the game total for the Hawks vs. Rockets at 216 points, while another has it at 213 points. In both cases, the Rockets are listed as nine-point favorites.

If you were to use the Tunnel System, you would bet the over (213) at one sportsbook, and the under (216) at another sportsbook. If the final combined score between the Hawks and Rockets is 214 or 215, you will have successfully won both of your bets. If, however, it falls outside of that “tunnel,” then you’re still assured to win one of your two bets.

Winning just one of the two bets will result in a small net loss since you’ll generally have to lay -110 odds on both wagers. In order to reap the rewards of the Tunnel System, you have to win both bets roughly 10% of the time. But, given that the “tunnel” is the most likely outcome, it certainly has the potential to be profitable.

The Tunnel System also requires you to do your homework. Although you might notice minor discrepancies online NBA betting sites, it’s rare to find totals that are greater than two points. If you do find one, make sure to pounce!

It’s impossible to win every bet, but you can potentially still win in the long run by employing the Martingale System. This progressive betting strategy requires you to double your betting sums on a chosen team’s game totals until they win.

Let’s say that the Golden State Warriors are averaging 108 points per game and have scored 110 points or more in their past five games. After examining that evening’s match-ups, you decide to bet $20 on the Warriors surpassing 110 points in their game against the Rockets. If the Warriors succeed, you win your bet and make a small profit.

The keys to the Martingale System are patience, a large bankroll, and an understanding of statistical trends.

The keys to the Martingale System are patience, a large bankroll, and an understanding of statistical trends. At some point, you’ll need to throw in the towel if your losses become too large, but if you’ve done your homework, then your patience should be rewarded. As they say, if at first you don’t succeed, try, try again.

When using the Martingale System, you should consider a team’s current scoring average, player match-ups, key injuries, and the pace of play for both teams. These factors will go a long way towards properly predicting the final score.

The D’Alembert System is generally less lucrative than the Martingale System, but it appeals to betters with smaller bankrolls who are more risk-averse.