How to Calculate FIP to Place Better Baseball Bets 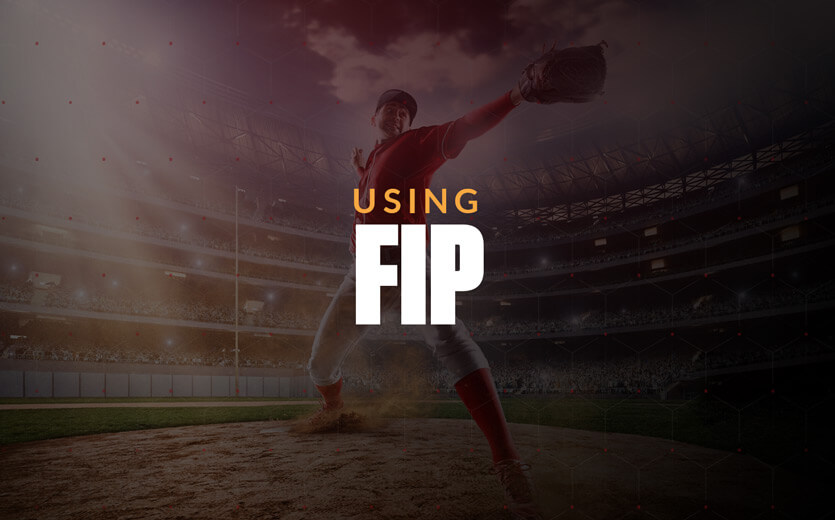 What is FIP? How can we use it to better inform our baseball bets and improve our long-term profitability?

Baseball offers a wealth of information that can aid a bettor’s choices.  You’re likely familiar with traditional statistics like errors and RBIs. But advanced analytics, or sabermetrics as these so-called fancy stats are also known, can prove more effective when handicapping MLB games.

This is where FIP – Fielding Independent Pitching – comes into the reckoning. FIP is an advanced pitching analytic that attempts to isolate and measure a pitcher’s defensive contributions.

Voros McCracken created FIP to separate the factors in a game that a pitcher can control from the factors that are out of his control.  When it comes to betting, FIP  helps you forecast each pitcher’s likely future performances. It’s also helpful in identifying pitchers who are likely overvalued by more traditional measures.

What Is FIP in Baseball?

FIP focuses only on events that are in the realm of a pitcher’s control. These include strikeouts, unintentional walks, hit -by-pitches, and home runs. When calculating FIP, the results of balls hit into the field of play are completely removed from the equation. Hence the name, Fielding Independent Pitching.

Pitchers who tend to surrender more balls in play while on the mound will generally post a FIP greater than their earned run average (ERA). The removal of balls in play from the FIP equation is based on the belief that a pitcher has little control over the outcome of ensuing plays. That is, unless he happens to field the ball himself.

How to Calculate FIP

The fielding independent pitching formula is as follows:

In this eqation, the FIP constant is calculated from the overall earned-run average (ERA) and overall FIP of the entire league. The FIP constant will always be the same number for every pitcher.

FIP and ERA numbers usually appear similar at a surface level. Most pitchers have very little variance between the two numbers.

Such is the case with approximately three-quarters of big-league pitchers who’ve pitched at least 1,000 innings. Expect their FIP and ERA to be within 0.20 of each other.

When it comes to assessing pitchers, general FIP and ERA numbers can be compared similarly. Those with a FIP of 5.00 or more are considered poor pitchers. A FIP of 4.00 equates to an average pitcher. Those mound men who post a FIP around 3.00 are considered above average. Any pitcher who can dip their FIP below 3.00 qualifies as an elite Cy Young Award contender.

Despite these surface-level similarities, FIP is a much more predictive indicator of a pitcher’s true value than ERA.

Pitchers whose ERA is much lower than their FIP are likely due for a correction. If a pitcher’s ERA is 2.35 but their FIP is 3.58, it’s likely that their ERA value is heavily influenced by the strong fielding performances of their teammates.

But relying on your team’s fielding ability alone is not a viable defensive strategy over the long run. Eventually, those balls will start falling in. Opponents will begin to hit better against the pitcher with runners on base. Looking for pitchers with low ERA and higher FIP can help you identify the players and teams most likely to eventually suffer this fate. Bet against pitchers with such a record.

At the other end of the scale, suppose there’s a pitcher with a 4.48 ERA but a 3.68 FIP. In this example, the pitcher is outperforming his team. This is due for a positive correction. Eventually, his ERA will come down closer to his FIP. When this guy takes the mound, you’ll want to bet with him.

FIP as an Under Bettor’s Tool

Pitchers who post a high ERA but a low FIP are always going to be solid under bets on a game’s total. As we know, a low FIP value suggests the pitcher is likely to post a strong performance and allow relatively few runs compared to an average pitcher.

But sportsbooks who look at ERA to set the total will put the over above what it should actually be. You can ride this pitcher as a safe under proposal until his ERA adjusts and he’s no longer being offered at such long odds.

FIP is also a useful indicator when it comes to wagering on underdogs. Betting a pitcher with a low FIP who’s taking the mound for a weaker team is a wager that should garner the bettor a price. This will especially hold true if he’s facing a top team.

FIP is flawed in its punishment of pitchers who aren’t power pitchers. Some of the most effective pitchers don’t strike out a lot of batters. Instead, they tend to throw pitches that result in weak hits easily fielded for an out. Because such plays require the assistance of a fielder, they don’t benefit the pitcher’s FIP rating despite their clear defensive value.

For instance, in 2019 Dakota Hudson of the St. Louis Cardinals posted a 4.93 FIP and a 3.35 ERA. But his 258 ground-ball outs were second in the majors, and he gave up just seven hits per nine innings.

Ultimately, in the vast majority of cases, FIP is a useful tool that offers a true picture of how a pitcher is performing. Pay attention and it can lead to successful baseball betting.

But FIP is just one of many metrics and strategies you can use to improve your return on investment when wagering on baseball. Check out the rest of the baseball articles in our how to bet on sports section to learn more.