How Early Should the Line Be Released? 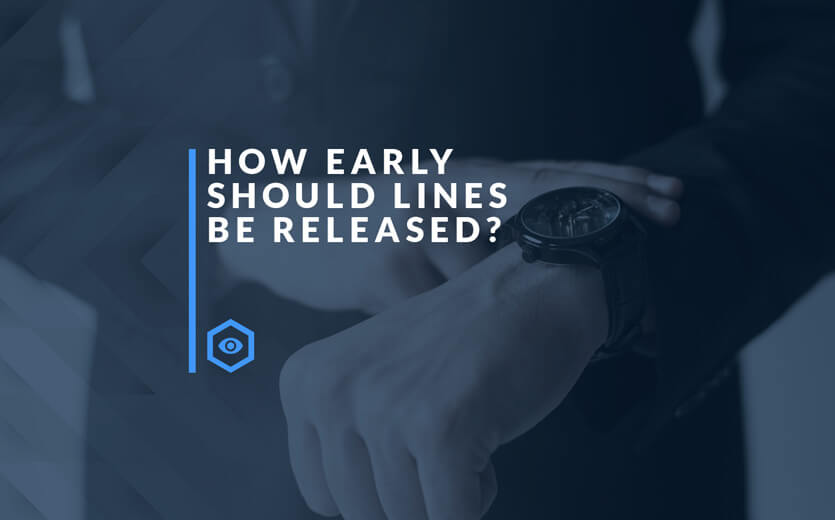 Ask any sharp sports bettor, and they’ll tell you there’s simply no shortcut to effectively handicap your wagers and make the right picks. There is a seemingly endless stream of strategies, statistics, and angles to consider when preparing to bet on a sporting event. Taking the time to weigh many of them will pay dividends in your long-term profitability.

Of course, you need to know what the odds are before you can compare the probabilities implied by the betting line to your own assessment of what’s most likely to happen in a sporting event. Sportsbooks release their betting lines at different times, and bettors who want ample time for research stand to benefit from earlier release times.

Early odds tend to be a more accurate reflection of the oddsmaker’s prediction of what will happen in the event, as they have not yet been influenced by the amount of money coming in on either side. Of course, you’ll still want to remove the vig to find the actual probabilities the sportsbook has assigned to each potential outcome.

On the other hand, lines released closer to the game in question may require less effort to evaluate. Because the oddsmakers have already accounted for last-minute developments such as injuries or lineup changes that might affect the outcome, there is less risk in betting on a line closer to game time.

Betting late on a line that was released early offers its own advantage. Bettors can watch for line movement to see where the public is putting their money, which is crucial for those who like to bet against the public or chase steam moves.

To help sports bettors understand what to expect from their sportsbook, Sports Betting Dime set out to determine standard line release times for the three most popular types of wager: moneyline, point spread, and totals.

Sports Betting Dime commissioned a study to determine industry standards at online sportsbooks for the qualities that matter most to bettors. Collaborating with graduate students at a leading research university, we dug through data from leading online betting sites.

Our team compared the line release times at 12 popular online sportsbooks throughout the 2018 NFL season to identify typical line release times pinpoint the operators who are first, last, and everywhere in between when it comes to making odds available.

Line release times for moneyline, point spread, and totals lines were evaluated. Here’s what we found:

Bettors who tend to mix things up in terms of wager type should reference the following ratings to determine which sportsbooks are early and late to the game across all bet types:

The sections below provide a more specific breakdown of the data by bet type.

Compared to point spread and totals lines, moneylines were the last to be released at all 12 sportsbooks evaluated in this study.

The average moneyline odds release across all books was 7.9 days prior to game day. As an industry standard, it’s fair to say that bettors should expect to be able to wager on NFL moneylines one week in advance of the game.

The sportsbook to release moneyline odds earliest released them an average of 20 days prior to game day. The second earliest option followed a full five days later, with the majority of sportsbooks releasing moneyline odds the same week as the game.

Ten out of 12 sportsbooks evaluated released totals and point spread lines at the same time, whereas only two released their moneyline that same day. In some cases, this discrepancy is striking – one sportsbook saw a 43-day delta between the average release of point spread/totals lines and moneyline odds.

There is a great deal of variation in line release times for the point spread. Bettors pursuing a strategy of putting down early money to avoid the influence of the public and big money on the line will have more time to do so on the point spread compared to the moneyline.

At 11 of the 12 sportsbooks analyzed, the point spread was the first line to become available or was released at the same time as the totals line.

The average point spread line release time across all books was 18.6 days in advance of game day. This number is influenced by outliers, so bettors should be cautious interpreting it as an industry standard.

Bettors who want to get money down early have plenty of options when it comes to totals betting, particularly compared to the moneyline. This is good news for those who want to jump on early odds that haven’t yet been influenced by public money or steam moves.

As with the point spread, there is a great deal of variation in line release times on totals wagers.

You’ve likely noticed that this table looks quite similar to the one directly above. The vast majority of sportsbooks evaluated (10 of 12) released totals and point spread lines at the same time.

Totals lines across all books were released an average of 18.6 days prior to game day. This number is identical to the average across all books for the point spread. This average was influenced by outliers, making it less reliable as an industry standard.

When Should You Expect Lines to Be Available?

Consider the wide range of variation between wager types when evaluating line release times. Point spread and totals odds are generally going to be released earlier than those for the moneyline, but we also observed significantly more variance between sportsbooks on point spread and totals lines.

With some conservative rounding of the averages, the data collected for this study suggest bettors should expect to see lines released on the following time frames:

Moneyline: 8 days prior to game

Point Spread: 19 days prior to game

Totals: 19 days prior to game

Keep in mind that these standards apply only to football. Betting lines for other sports are generally released closer to the event in question, thanks to the busier schedules seen in most other popular professional and collegiate sports. That said, the rankings and general trends outlined in this article can be used as a general indication of each sportsbook’s approach to line release times.

Ultimately, line release times are only one component of the experience at any online betting site. Sports Betting Dime encourages bettors of all experience levels to shop around for the online sportsbook that best fits their needs and betting strategy.

Consider checking out our sportsbook ratings  to find the one that’s right for you.

The data outlined here is one component of a larger study to determine industry standards for several factors most important to bettors. Check out our snapshots on standard line movement and amount of juice/vig charged.