Why Do Americans Bet on Sports? Exploring Motivations 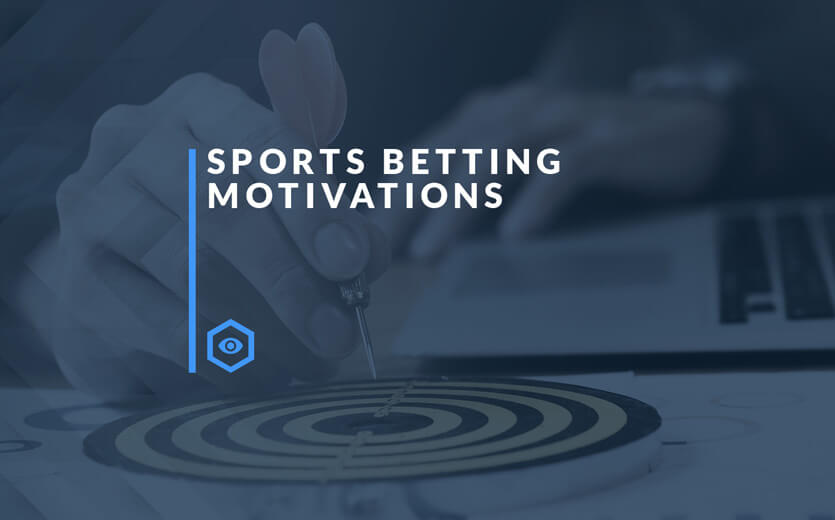 Sports are an integral part of American culture. No matter where you’re located or who you’re talking to, there’s a good chance sports can provide common ground and connection. No doubt, watching and commenting on them is part of the cultural fabric that ties us together.

Betting on sports is also widely popular in the United States, if not yet as widely discussed. As more people make the leap from sports fan to sports bettor, Sports Betting Dime set out to explore the motivations that drive Americans to bet on their favorite sporting events.

SBD commissioned a study of self-identified sports bettors from across the United States to put some numbers behind our assumptions. Among other topics, the survey asked bettors about their initial and continuing motivations to bet on sports, exploring the social influences and other factors that drove them to place their first wager and beyond.

Let’s take a look at the findings. 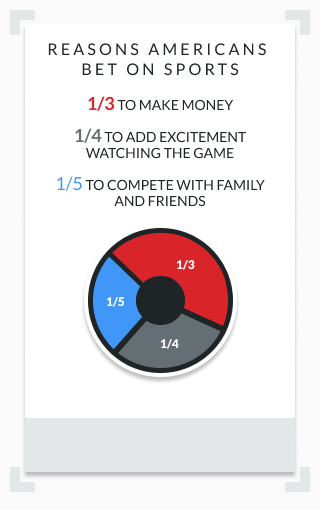 It’s no surprise that most people bet on sports to make money. After all, fantasy football and free pick’em sites are always there for those who want to test their handicapping skills without risking real money. Chances are, if someone is taking a trip to the casino or going through the process of depositing with an online sportsbook, they are looking to make some cash for their efforts.

The numbers back this up, with more respondents indicating that their primary motivation to bet on sports is ‘for financial gain’ than for any other reason. More than one in three sports bettors (34.5%) do so primarily to make money, but it’s fair to say that many others scoff at the idea of getting in on the action to earn a bit of extra income.

Another third of current bettors (35.2%) indicated that making money was the least important reason they bet on sports. Instead they rank ‘to add excitement to the game,’ ‘to compete with friends and family,’ and ‘because they believe in their favorite team’ as more important motivators.

It seems that even though making money is the single biggest motivator for sports bettors, the expectation of turning a profit is far from universal. Fascinatingly, even the half of American sports bettors (49.8%) who always view sports betting as an investment are not more likely to do so for financial gain than for other reasons. 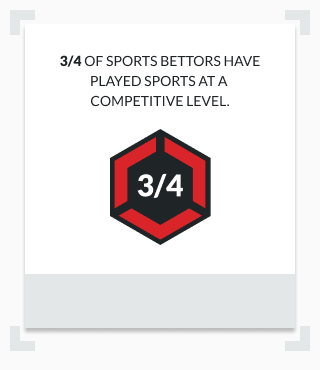 The overwhelming majority of sports bettors have played sports at a competitive level (in an organized league at high school level or above). For some, the ritual of preparing a profitable betting slip isn’t much different than preparing for a big game. Both pursuits require a substantial investment of time, a relatively high level of skill, and a desire to outwit and outperform the competition.

Let’s take a closer look at how social influences play a role in motivating people to bet on sports.

It’s human nature to be influenced by those around us. From what we wear to what we eat, people are strongly conditioned by their surroundings. The people we interact with most frequently have an outsized influence on our behavior.

Social psychology tells us that  people are even more likely to rely on social cues when evaluating behaviors that can be considered morally questionable. Jonathan Haidt, a leading American psychologist who specializes in the psychology of morality, has highlighted the leading role of social and cultural relevance in constructions of morality.

Many scholars advocate for a ‘culturally relative’ model of morality, wherein concepts of ‘right’ and ‘wrong’ are determined by nothing more than the majority opinion regarding what’s right vs wrong. It follows that those who operate in different social groups or grow up in different households will have different ideas about what is right vs what is wrong.

Bettors Have Friends Who Bet

Sports betting has rightly enjoyed an increase in public support and acceptance in recent years, but there’s no denying that it has traditionally been stigmatized in American culture. But as with most other social issues in the United States, exposure to this stigma varies widely depending on one’s social circle.

Our data suggest that the comfort level of one’s peers with sports betting has a large influence on their likelihood to put down some money themselves.

More than any other factor, a desire to join friends already betting on sports motivated survey respondents to get in on the action. 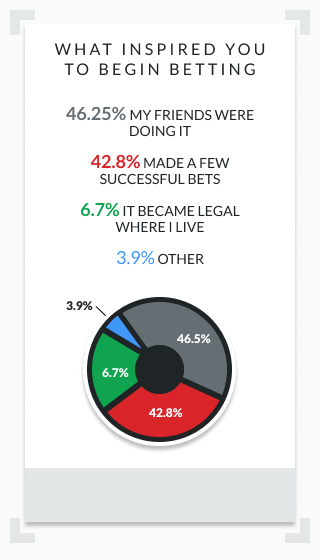 These numbers also suggest that most people are more influenced by social norms than the written letter of the law. Of course, this idea won’t come as a surprise to anyone who’s seen a group of people illegally cross the street at a crowded city intersection.

Whether bragging about their records or comparing handicapping strategies, the overwhelming majority of sports bettors discuss wagering with family and friends. More than eight in ten (82.5%) talk about betting with their inner circle.

The approval of this social circle seems to be highly predictive of whether someone bets on sports. More than eight in ten bettors (85.8%) say they have friends or family who approve of betting on sports, with four in ten (43.5%) suggesting that all their family and friends approve. 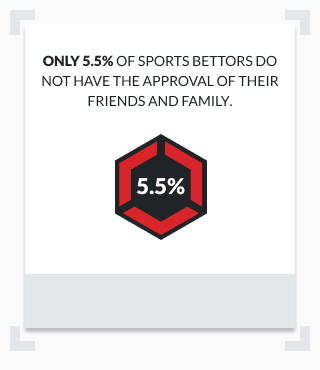 The sense of connection to other sports bettors also seems to extend far beyond the home or office water cooler. More than nine in ten sports bettors (92.6%) believe the activity is either ‘very popular’ (53.1%) or ‘somewhat popular’ (39.5%) in the state they live in.

Looking at these numbers, it’s fair to conclude that exposure to an accepting social circle and family environment is highly motivating for sports bettors. This suggests that growing acceptance of sports betting will lead more curious fans to give it a try.