Hedging Your Sports Bets as a Risk Management Strategy 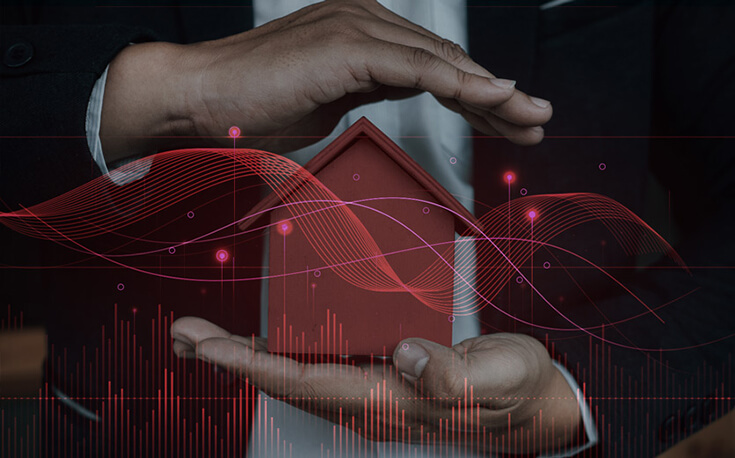 Hedging is a method used to either reduce your risk or guarantee a profit when betting on sports. Fundamentally, hedging is a risk management strategy to help you minimize losses and maintain a healthy bankroll.

While hedging bet can seem like a challenging strategy to master, the concept is simple. Hedging involves placing a new bet on a different outcome than the one you originally wagered on. Depending on the scenario, this approach can secure profit regardless of which outcome occurs or reduce exposure on your initial bet. In the end, the goal is always to limit potential losses.

When Should You Hedge Your Bets?

Let’s take a moment to understand the concept behind a hedge. In essence, a hedge is any action taken to reduce the risk of a damaging outcome occurring in the future.

Car insurance is a great example. Mandatory in every US state (except New Hampshire), car insurance is a hedge which protects car owners against the financial burdens of getting in a car crash.

Here’s the thing: insurance is expensive, and it’s entirely possible that you could drive your entire life and never need to use it. So, would most people still buy insurance if the government didn’t make them do so? Probably.

Most people would rather swallow the predictable cost of insurance to protect themselves from the massive financial loss of getting in a car accident. In essence, you’re making a recurring small bet with your insurance, and it protects you from the low probability (but high cost) event of getting in an accident.

So, how does this relate to sports betting?

Let’s say you place a massive bet with long odds and later realize you have exposed yourself to an unacceptable level of financial risk similar to, say, getting in a car accident. You can place additional bets on opposing outcomes to reduce this exposure. These opposing bets act as your insurance policy, or your hedge.

What Does Hedging Mean for Sports Betting?

There are a lot of different scenarios where you can secure a profit by exercising the appropriate hedge. We’ll take you through some specific examples below.

Profiting on Playoff Futures with Hedging

If you hedge your bets carefully, betting on a playoff series is an easy way to guarantee a profit.

For example, let’s say you’re betting on hockey and the Pittsburgh Penguins are playing the Columbus Blue Jackets in the first round of the NHL playoffs. You liked the Blue Jackets’ chances, so you bet on them as the heavy underdog at +400.

Say the Blue Jackets went up 2-0, and were heading home to play games 3 and 4. As a result, Pittsburgh’s series odds became a lot longer than they initially opened, moving to -100. At this point, you could place a $200 bet on the Penguins to win the series, and you’d be guaranteed a profit no matter what.

Of course, you could just wager $100 on the Penguins, and by doing so, secure yourself from any potential losses while maximizing your return if the Columbus Blue Jackets won. If the Jackets managed to win the series, you’d win $400 (minus the $100 you bet on the Penguins). It wouldn’t secure you a profit, but you wouldn’t cut into your potential profits to a significant degree either.

As a bettor, it’s up to you to decide what you’re comfortable with in this scenario. If you’re a risk taker, and entirely confident in a Blue Jackets victory, you might not want to hedge at all. If you’re a bit more conservative in your approach and are looking to protect your bankroll, hedging is the smarter play.

Futures wagers are a great way to lock in profits with hedging.

In either scenario, you’d be guaranteed a significant profit. Of course, the Eagles ended up winning Super Bowl 52.

Many bettors hedge to ensure guaranteed profits when they place parlay bets.

Say that you’ve placed a parlay on the moneyline of four Sunday football games. Its 6PM and three out of the four teams have covered. The final game in your parlay is going to kick off within the hour.

Of course, the amount you’d need to wager in order to secure a profit would depend on the specifics of the moneyline odds in your parlay.

Hedging to Mitigate Your Losses

If you’ve lost confidence in your initial wager, hedging can reduce your exposure to losses. Betting on the opposite outcome to your original wager acts as an insurance policy.

Say that, earlier in the week, you bet $100 on the Canucks to cover the spread of -1.5 at (-110) to beat the Coyotes. However, by the time Saturday night rolls around, the Canucks lost three key players to injury, and their starting goalie was mired in a horrible slump.

These events would understandably cause you to lose faith in the Canucks’ ability to cover the spread. As such, you’re no longer comfortable with placing $100 on this outcome. 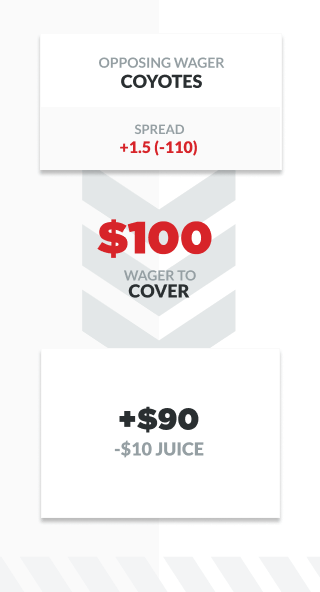 Additionally, you can make a partial hedge bet. This way, you can reduce the overall size of your bet on the Canucks. By wagering $77 on the Coyotes (with your initial $100 bet still open on the Canucks ).

There are tons of combinations you can choose for your hedges, depending on the exposure you’re comfortable with.

Taking Back an Accidental Bet

While it’s not very common, we’ve heard many stories of accidental bets being placed. Once you’ve staked a wager, it can’t be rescinded.

So if you’ve made a bet by accident and don’t believe it’ll be successful, hedging allows you to reduce your exposure instantly. Just bet on the opposite outcome, and all you sacrifice is the sportsbooks’ juice.

For example, say you mistakenly wagered on the total of a Knicks vs. Nets game to be over 201 (-110). Simply bet the same amount on the under, and you’ll only incur a small loss either way.

Deciding when to hedge is inherently cloudy territory. However, these two formulas can help you calculate how to prevent a loss and secure maximum profit via hedging.

Formula for Preventing a Loss by Hedging

The formula for hedging to prevent loss is simple. Since we know how much we want to make, it’s a matter of manipulating the formula for calculating profit from decimal odds. In the end, you just divide your original stake by the hedge decimal odds minus one.

For example, say you bet $100 on the Jaguars to win the Superbowl at (+1000) early in the season. However, they’re up against the Patriots in the Super Bowl. The Patriots are listed at (-200). You’ve decided you want to guarantee you make your money back.

The formula for hedging to prevent loss is simple … Just divide your original stake by the hedge decimal odds minus one.

You’d need to convert American odds to decimal odds before you can make the conversion.

Patriots Odds to Beat the Jaguars = 1.50

If you bet $200 on the Patriots, you will receive all of your money back, no matter the outcome. A Patriots victory secures you $100, covering your initial stake on the Jaguars.

Plus, you still stand to profit immensely should the Jaguars win.

Formula to Maximize Winnings with Hedging

This formula is slightly more complicated than the last, but will ultimately save you time if you ever find yourself in an advantageous hedging situation.

The formula is as follows:

P = Profit you stand to acquire on your first wager

W1 = The $ amount of your first wager

To calculate how much you’re going to win, simply subtract x (the amount you placed on the hedge) from P.

The formula would apply as follows

Hedging is Not Line Shopping (Arbitrage)

Once you’ve wrapped your head around hedging and know how to integrate it into your sports betting strategy, it’s important to remember what hedging is not. Hedging is not line shopping. It has absolutely nothing to do with searching for the best odds and trying to exploit price discrepancies between online sportsbooks.

Hedging is Different for Every Situation

There’s no magic formula to dictate when you should hedge your bet, or when you should abstain from a hedge. Hedging inherently cuts into your profit margins, no matter how you slice it.

This is a never-ending debate in the sports betting community, extending all the way from internet forums to the most successful sharps in sports betting history.

Our best advice? Get comfortable with the different advantages and disadvantages of hedging a bet, and apply this knowledge to your own bets. The suitability of hedges vary based on the situation, and every bettor has their own unique goals, bankroll, and risk tolerance.

We noticed you're from ohio where legal online sports betting is not currently available. Enjoy risk-free action while you wait at SBD Play.