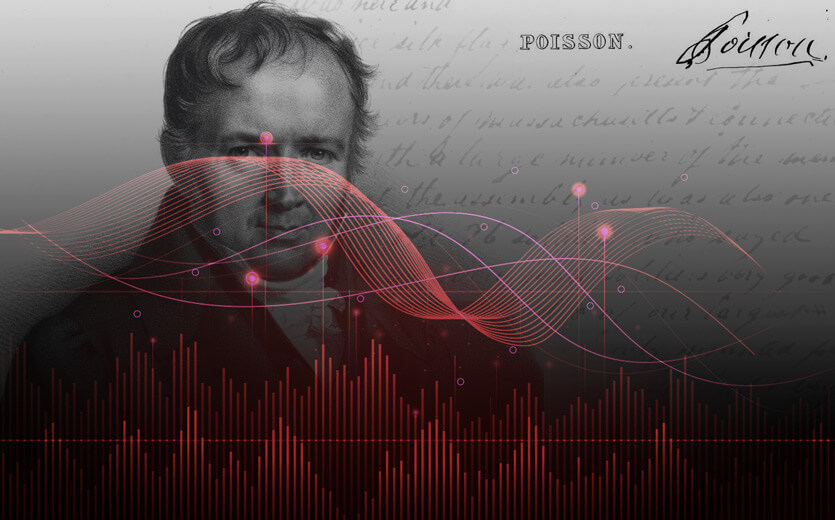 For decades, sharp bettors have used statistical analysis to predict the final score of sports events, and gain a critical edge at the sportsbooks.

What Is a Poisson Distribution?

Developed by 19th-century French mathematician Siméon Denis Poisson, a Poisson distribution is a probability theory that can be used in conjunction with historical sports data to determine the most likely outcome of a sports event.

In the field of statistics, a Poisson distribution measures the probability of unrelated events that occur within a specific period of time (assuming that the expected number of events is known).

To the layperson with limited background in mathematics and statistics, it may seem overwhelming. In a sports betting context, however, a Poisson distribution is a fairly simple method for using the averages of historical game results to determine the likelihood of a range of potential scores in a future sports event.

This makes the use of a Poisson distribution a potentially critical part of an overall betting strategy when wagering on events where scoring occurs on a small scale and in increments of one. Such events include soccer matches and, to a lesser extent, hockey games and certain types of NFL props wagering.

Take a soccer match, for example. A Poisson distribution can be used to determine the most likely final score by calculating the “Attack Strength” and “Defense Strength” of the two opposing teams, then comparing them.

To illustrate, we’ll use a hypothetical matchup between Arsenal FC and Chelsea FC, where a Poisson distribution is applied using historical scoring data taken from the 2017-2018 English Premier League season.

Assuming Arsenal is the home team, the following simple calculations must first be performed, using scoring data from the 2017-2018 EPL season:

With each team’s Attack Strength and Defense Strength determined, we can now calculate the most likely number of goals that will be scored by each team in the matchup.

With these calculations, we have determined the average goals scored in the match are as follows:

Now that you have calculated the likely number of goals that will be scored by each team, you can use one of the many Poisson distribution calculators available on the Internet to determine the probability of a range of scoring outcomes for each team.

To do so, you can use this calculator by plugging in the likely number of goals scored by Arsenal (2.148) under “Expected event occurrences”.

Determining the percentage chance of Arsenal scoring 0-5 goals in the match is achieved by typing 0, 1, 2, 3, 4, 5 in the “Expected event occurrences” and hitting “Calculate”. The same exercise can also be performed using Chelsea’s likely score (1.546) since we have already determined the percentage chances of each team.

Limitations of Using a Poisson Distribution in Sports Betting

While this example illustrates how the score of an individual match can be predicted by applying historical results to a Poisson distribution, the method also has limitations. Most notable among them is the human element.

Injuries, locker room dissent, and simple human error all have a dramatic impact on the final outcome of a sports event. Weather conditions can also play an obvious role in the outcome of a game, while unexpected game performances by clutch players can make the difference between winning and losing.

Hone Your Skills with Your Sportsbooks

Sports bettors often struggle to find value when making wagers based on the final score of a sports event. While even the most effective use of statistical analysis tools (like a Poisson distribution) and the sharpest sports betting strategies don’t necessarily guarantee you a win, developing a mastery of such tools can definitely have a dramatic impact on your ability to find value on the odds board!

Daniel has been writing about sports and sports betting for over 23 years. The seasoned pro has contributed to the likes of Sports Illustrated, Sportsnet, NESN, Bleacher Report, OddsShark, the Globe and Mail, and The Nation magazine.

Daniel has been writing about sports and sports betting for over 23 years. The seasoned pro has contributed to the likes of Sports Illustrated, Sportsnet, NESN, Bleacher Report, OddsShark, the Globe and Mail, and The Nation magazine.