After a thrilling Wild Card Weekend, which saw underdogs go 2-2 straight-up and only one game decided by more than five points, eight teams remain in the pursuit of Super Bowl 52. Here are the most significant movements in the Super Bowl 52 futures odds, which we have been tracking all year, along with your best value bets from each conference.

Will We Remember These Titans? 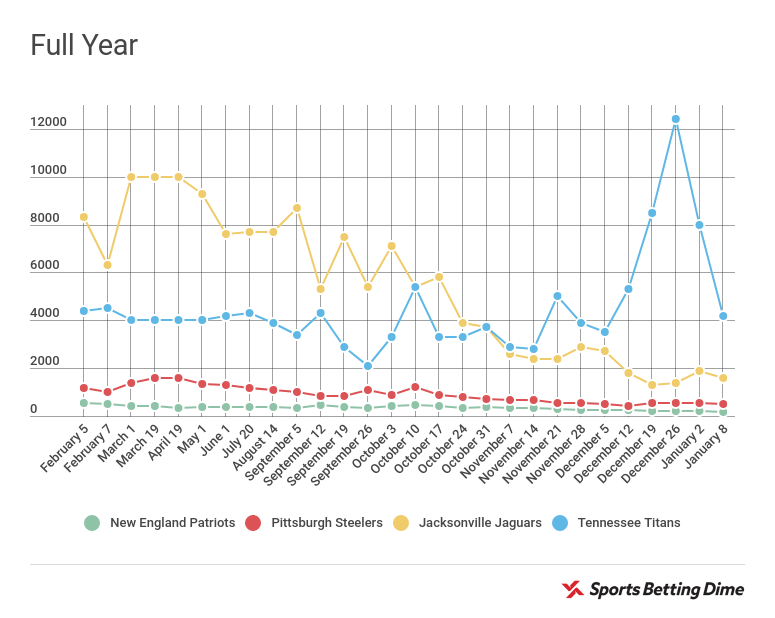 In the biggest upset of Wild Card Weekend, the Tennessee Titans erased a 21-3 second-half deficit, handing the Chiefs their sixth consecutive playoff loss at Arrowhead Stadium (22-21). The game turned when Marcus Mariota drove the Titans 91 yards on the opening drive of the second half, capping it off with a touchdown pass to himself.

Instead of lauding Mariota and the Titans for the comeback, many are blasting the Chiefs for their second-half collapse. But ultimately, it doesn’t matter how you remember the game; Tennessee is moving onto the Divisional Round to play the defending Super Bowl champion New England Patriots.

The Titans entered the playoffs with the longest odds to win Super Bowl 52, even behind the Buffalo Bills. Entering the Divisional Round, Tennessee remains the longshot. Their average odds did shorten to +4200 from +8000 last week, but online betting sites are not giving Mariota and company much of a chance. You can find the Titans as short as +2800 and as long as +6000.

EXPERT ADVICE (AFC): Don’t waste your money betting the Titans. Count me among the people who see their Wild Card win as more of an embarrassing Kansas City collapse. If Travis Kelce didn’t get hurt, and Andy Reid and Matt Nagy decided to give the NFL’s rushing champion, Kareem Hunt, more than five carries over the final 48 minutes of the game, the Titans’ season would be over. The New England Patriots will not make the same mistakes when they jump out to an early lead in the Divisional Round.

My advice remains consistent with what it has been for the last month: the Jacksonville Jaguars are your best value bet in the AFC. Jacksonville’s average odds to win Super Bowl 52 are now +1600, but you can still get them at +1800. Sure, the Steelers present a tough task, but Jacksonville has already beaten them at Heinz Field this year. The Jaguars went into Pittsburgh in Week 5 and laid a 30-9 beating on the Steelers, resulting in Ben Roethlisberger questioning whether he could still play. The Jaguars also have a decent chance to beat — or at least contend with — the Patriots, given the construction of their roster. The pressure they can apply on the passer without having to blitz, coupled with their ability to cover man-to-man, will give Tom Brady fits.

Pittsburgh’s track record against the Patriots is enough to keep you away from betting the Steelers, and New England’s +160 average odds to win Super Bowl 52 offer no value. Put your faith in the best remaining defense to pull off a couple upsets.

Should the NFC Fear the Falcons? 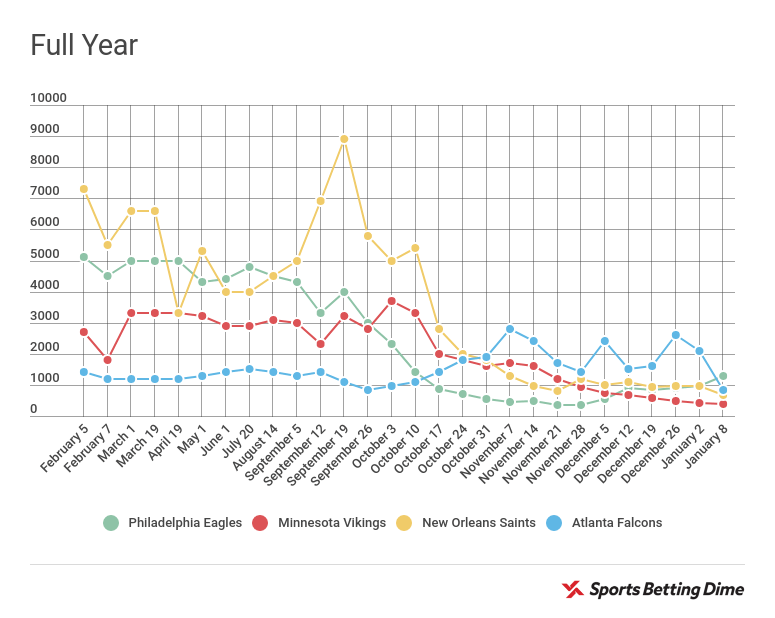 After a Week 16 beating at the hands of the New Orleans Saints, the Atlanta Falcons’ hopes of avenging their epic Super Bowl 51 collapse looked pretty grim. Their average odds to win Super Bowl 52 jumped to +2200 (from +1600 the week prior), and they had to worry about fending off the Seattle Seahawks in the NFC Wild Card race. But just over two weeks later, the Falcons have the entire NFC quaking in its proverbial boots.

EXPERT ADVICE (NFC): A little over a month ago, heading to Philadelphia in the Divisional Round would have been viewed as a daunting task. But with Nick Foles filling in for an injured Carson Wentz, facing the Eagles now seems like a luxury. So betting the Falcons this week is a smart play. Betting them to win the Super Bowl is not, however.

Just like the Titans, the Falcons benefited from miscues by their opponent last weekend. Thanks to special teams fumbles, the Falcons were handed the ball at LA’s 17 and 32-yard-line in the first quarter, allowing them to build an early 13-0 lead and lean on their ground game from there out. Yes, a Nick Foles-led offense is certainly susceptible to similar mistakes, but nothing will be handed to Atlanta when they have to play either Minnesota or New Orleans on the road the following week. The 2017 Falcon offense is a mere shell of the 2016 version, and their defense is overrated.

Last week, I told you to the Saints were the best Super Bowl 52 value in the NFC. Hopefully, you put your money down then, when their average odds were +950, because they are all the way down to +660 now. But even at those odds, the Saints remain your best value bet in the NFC. If there was ever any doubt as to whether Drew Brees could still shoulder New Orleans’ offense, it was silenced when the 38-year-old went 23/33 for 376 yards and two touchdowns against a solid Panthers defense on Wild Card Weekend. Heading into Minnesota this week is going to be a challenge, but the Saints have the talent at quarterback and overall balance on offense that’s necessary to not only move the ball against the stingy Vikings, but win a Super Bowl.