The first tournament of a tennis season, this time in new surroundings in Abu Dhabi, is a bit like the wild, wild west.

There are no recent results on which to judge form. The players have had both good and bad off-seasons.

And more than a month away from the Australian Open, some worry about peaking too early.

Despite Lack of Tournaments, Many Big Names Missing

Normally, for a tournament at this level, getting four of the top 10 would be solid.

But there were only two tournaments in 2020 after the French Open in October. You’d think the players would be eager to get competitive.

It turns out many are willing to wait for Australia; only half the top 30 are on board.

With the regular Australian summer schedule scuttled by the three-week postponement of the big event, the WTA Tour had to scramble to put on an opening tournament.

They ended up in Abu Dhabi, which is new territory for the women.

But as the pandemic continues to rage across the world, the same tight restrictions continue.

First practice in Abu Dhabi ☀️🤘
Not exactly the Tour we used to know, but at least, we are back 🎉 !! @WTA #bubbletennis

The players will be limited to hotel rooms and tennis courts and tested regularly. And they will be keen to avoid a quarantine that would knock them out of the Australian swing.

Those who adapt best to challenging circumstances still will typically prevail.

There is a full 64-player draw in Abu Dhabi. That means that six victories are required to take it – only one fewer than a Grand Slam. And in one week, not two.

The endurance is probably not going to be there for most of the players. So experience will play a big role in managing energy. 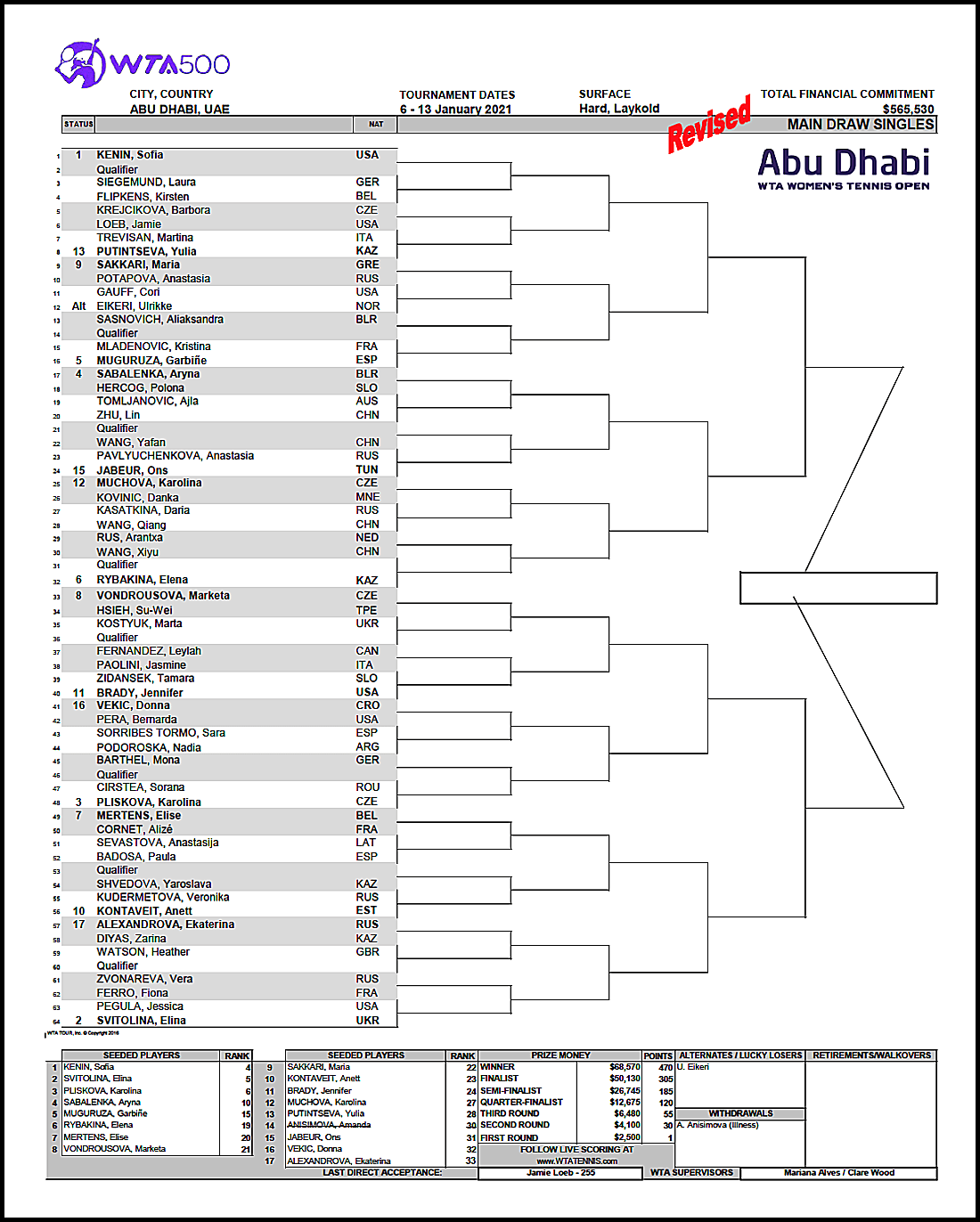 Happy to be back 😃✌️ pic.twitter.com/idlkMCQas0

Can Sabalenka Pick Up Where She Left Off?

The player who finished the 2020 season in the best form was Aryna Sabalenka.

The world No. 10 from Belarus won the only two tournaments that took place after the French Open, both on hard courts indoors.

And the last time she came through the Middle East last February, she won the (then) Premier 5 tournament in Doha and reached the quarters in Dubai. It’s a great place for her to start in 2021.

Sabalenka was the last one to hold up a trophy in 2020.

Kenin, the Forgotten One

Kenin, the world No. 4, reigning Australian Open champion, French Open finalist and the top seed in Abu Dhabi, continues to fly under the radar even if she did win the WTA’s Player of the Year Award.

She’s only the third-favorite on the odds chart.

With six match wins needed – in a week – Sabalenka is likely to wear herself out. She has yet to make a deep grand slam run, so lacks the experience.

Karolina Pliskova, who had only two good tournaments all of 2020, again is the betting favorite but has not delivered in quite a while.

Svitolina has arguably the toughest quarter.