There is an excellent chance that this year’s Italian Open women’s champion will be a first time-winner in Rome.

Because those who have won it before are well down the list of favorites.

With that, Simona Halep sits atop the favorites list again, as she did last week in Madrid when she and Iga Swiatek were the co-favorites. Of course, neither of them made it to the weekend.

Halep has never won it. But she’s made the final twice.

That was less than eight months ago. But she’s so far down the list she’s barely worth mentioning.

That’s not undeserved; neither has done anything this year to make you think they have a WTA 1000 title run in them.

For the first time since the Australian Open in mid-February, Serena Williams is in a tournament draw.

The 39-year-old American has won in Rome four times – the first in 2002, before Coco Gauff was even a twinkle in her parents’ eyes. Swiatek wasn’t even on solid food yet.

But the four-time champ hasn’t won it for five years. And given she’ll be stepping on clay this week for the first time, has played just a few matches on clay in the last two years and has given her opponent a walkover in three of her last four clay-court appearances, expectations are low.

Still, she’s there. Sister Venus, who received a wild card, pulled out over the weekend. 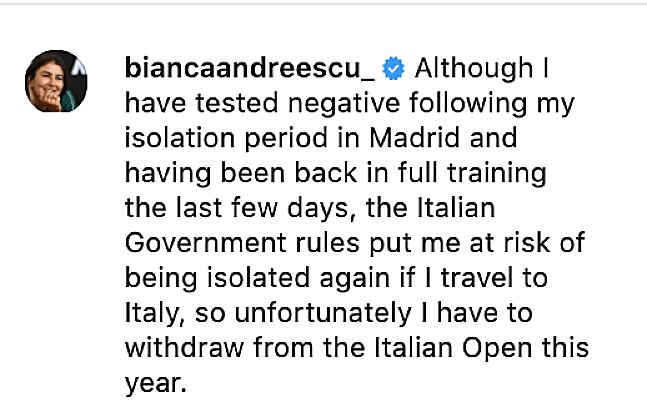 So did world No. 6 Bianca Andreescu. After testing positive for COVID-19 upon arrival (and missing Madrid), the Canadian cited complications with the Italian government for her withdrawal.

Rookies in Rome Are Big Favorites

World No. 1 Ashleigh Barty, who had her 16-match clay winning streak stopped by the power of Aryna Sabalenka Saturday in the Madrid final,  has only won one main-draw match in Rome. And that was two years ago.

Sabalenka has never won a match in Rome. Neither has 2020 French Open champion Swiatek.

Naomi Osaka, who should never be counted out anywhere, is still taking her baby steps on clay. While she’s improved in increments upon each trip to Rome, putting her at +1000 is probably being aspirational.

Crazy BetMGM Promo Allows Bettors to Bet $20 on Any Event, and Win $100 Even if Their Wager Loses
Read More

Mertens had a leg issue after her marathon upset win over Halep in Madrid.  She won just one game against Sabalenka before retiring.

But even healthy, Kudermetova is a form player on clay this spring, and a champion in Istanbul right before Madrid. Pick the Russian.

Gauff, still just 17, has never gone past the second round of any WTA red clay event in her young career. And she’s looking for form.

Putintseva, a pint-sized annoyance (and we mean that in the best way) will do everything she can to not only give Gauff rhythm, but be as disruptive as she can.

And clay is by far her best surface. She’s ranked just one spot ahead of Gauff at No. 34. Look for the Kazakh to cause disruption.