The 2018 FIFA World Cup of Soccer is here! While soccer is basically a sport that runs year round in the various leagues across the globe, the World Cup (hosted in Russia this year) is one of the biggest sporting events that only comes around once every four years, bringing many new fans and bettors to the sport.

There are 32 nations that qualified for the tournament, and they have been divided into eight groups on December 1, 2017.

We are tracking the 2018 FIFA World Cup odds for all 32 nations in the tournament. The graphs below are generated by averaging the odds from our most trusted sportsbooks. Be sure to check back regularly for updates leading up to, and throughout, the entire tournament.

Countries with the Most World Cup Appearances

Of the eight groups, seven of them feature a past champion – Group H is the only one without a previous winner. 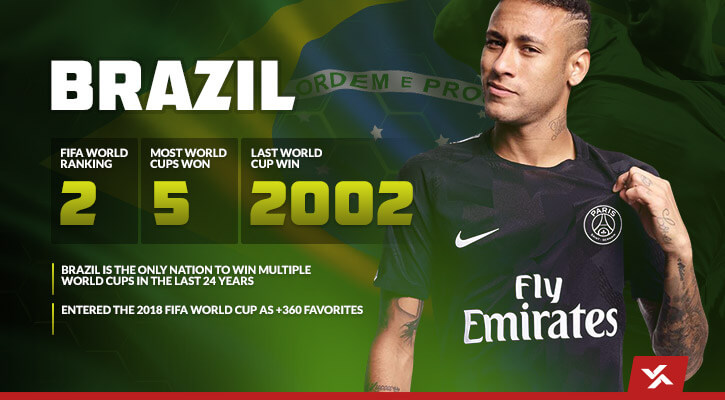 (05/25/18) Uruguay’s 2018 World Cup odds shortened slightly upon being drawn into Group A alongside Russia, Egypt and Saudi Arabia. As the 17th ranked nation in the FIFA World Rankings, they are strong favorites to finish first ahead of Egypt (46th), Russia (66th) and Saudi Arabia (67th).

Betting odds have remained fairly steady throughout this Group with the Saudis being heavy underdogs at an average price of +85000 for several months. Considering they loaned out nine players from their domestic leagues to La Liga during the season to gain additional experience and not one of them played, these odds seem justified.

(12/01/17) The nations of Group B all saw their odds fall with the groups being announced and being drawn alongside one of the tournament favorites, Spain. Morocco and Iran saw their odds fall the most, while Portugal dropped from average odds of +1400 to +2200 to win the World Cup.

(05/25/18) The Portuguese have stabilized around +2200, but odds for Morocco and Iran have continued to drift.

(06/17/18) A loss to Iran in their opening game all but ends Morocco’s slim chances of advancing to the knockout stage.

(12/01/17) The world’s 12th-ranked Danes saw some of the most volatility in their World Cup odds today when the groups were drawn. Outside of France, their remaining opponents of Peru and Australia are not exactly world beaters. Denmark moved from as much as +20500 to win the 2018 World Cup, all the way down to +8500 with the draw.

Denmark’s strongest competition for that second spot, (likely) behind France, for qualification would be Peru. However, Peru will be without team captain and leading scorer Paolo Guerrero, who has been suspended for testing positive for a banned substance.

(05/31/18) The Swiss Federal Tribunal has lifted the ban on Paolo Guerrero, ruling him eligible to participate in the 2018 World Cup.

(05/25/18) Group favorites Argentina have seen their odds to win the 2018 World Cup drift out slightly of late which could be due to the uncertainty of injured striker Sergio Aguero. The Manchester City star underwent arthroscopic surgery for a knee injury in April and his readiness for the World Cup is still in question. Aguero scored 30 goals for the Citizens this year.

(06/17/18) A draw in their opening game with Iceland has cast some doubt over Argentina, dropping them out of the top five contenders.

(12/01/17) Switzerland saw their odds shorten after qualifying for the World Cup from an average of +7000 to +5600. Though now that the groups have been drawn, and they find themselves alongside Brazil – one of the favorites to win the title – their odds have moved back up to +7000.

(12/01/17) Similar to Group E, when you get drawn alongside one of the favorites to lift the trophy in Germany, your odds to win will only suffer. Mexico and South Korea’s World Cup odds have both fallen with today’s announcement of the draw.

(12/01/17) Group H is likely the most balanced group, which can be seen by the relatively close odds between all four nations to win the group. Poland is seen as having a favorable draw seeing their odds to win the 2018 World Cup move from +5200 to +2600 after the announcement.

(05/08/18) Since the group stage draw, Poland has fallen out of favor with bettors as their odds to win the World Cup have drifted back to an average of +5200.