The UEFA Champions League is back and better than ever! This year marks the 64th season of Europe’s premier club football tournament and we’re tracking the movement of every single team, including some very intriguing longshots. The graphs below are generated by calculating the average odds from several of the most trusted sportsbooks.

Already one of the favorites to win the trophy, Manchester City are now alone with the shortest odds to win at an average of +500, slightly shorter than the +600 they had last month. Their good start in Premier League has done nothing to dissuade bettors from backing the Cityzens.

Defending champions Real Madrid have seen their odds drop slightly to +750. They are still adjusting to the post-Ronaldo era, but should have a relatively easy go of it in the Group Stage with Roma their only big competition in Group G. 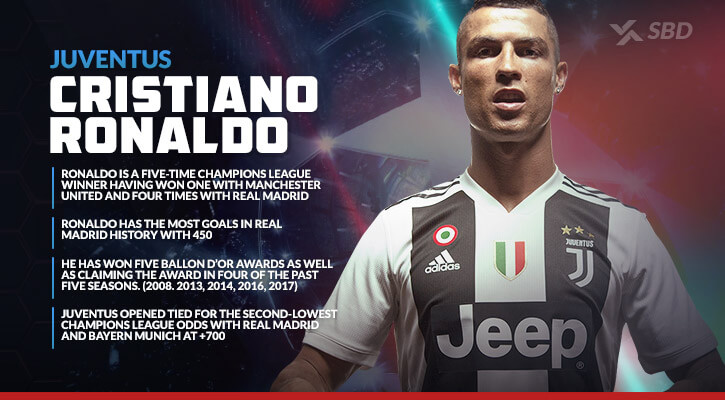 Ronaldo’s new team, Juventus have seen their average odds shorten from +700 in July, to +650 today. They’re off to a good start in Serie A and are favorites to win Group H.

La Liga’s Real Madrid has won the past three and four of the past five Champions League tournaments.

With Barcelona winning in 2014-15, a Spanish club has now won the past five tournaments.

The last time a team outside of one of the major European leagues won the Champions League was when Portuguese side Porto won in 2003-04.

Drawn alongside Atletico Madrid, Monaco and Club Brugge in Group A, oddsmakers aren’t liking Borussia Dortmund’s chances of winning the tournament. They’re now trading at an average of +7100.

Teams with the Most UEFA Champions League Titles

The last time a non-La Liga team won was in 2012-13 when Bayern Munich won from the Bundesliga.