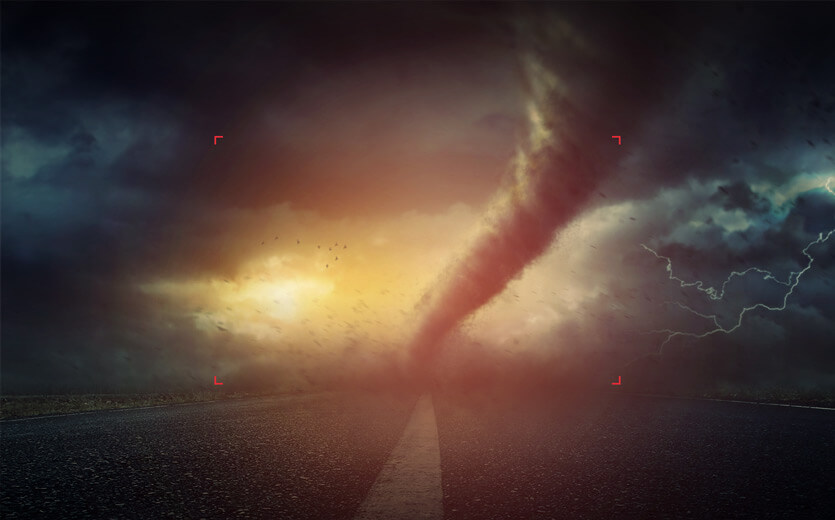 There are a wide variety of unforeseen circumstances and catastrophes that have plagued the world of sports over the years. Snowstorms, hurricanes, and knife-wielding fans have forced major sporting events to be postponed, relocated, or even canceled.

We’re taking a look at some of the most unbelievable, totally unforgettable moments in sporting history.

2013 March Madness was well underway when a gruesome scene unfolded on the court. There were six minutes left on the clock during the first half of the Midwest Regional final between the Duke Blue Devils and Louisville Cardinals.

The Cards were in the lead when the Louisville guard Kevin Ware ran to contest a three-point attempt by Tyler Thornton. But when Ware landed, he turned awkwardly, and the entire nation watched in horror as his bone popped out through his shin.

The accident happened directly in front of the Louisville bench, reducing coach Rick Pitino to tears and causing several of Ware’s teammates to vomit.

Ware was taken to hospital for emergency surgery to repair the compound fracture in his right leg, but not before he told his teammates, “Don’t worry about me. I’ll be okay. Go win this thing.”

The game was delayed for just 10 minutes, and when play resumed, the Louisville team did their teammate proud by winning the game 85-63.

Six days later, Ware, on crutches, was courtside to watch his team in the Final Four. The Cards went on to beat the Michigan Wolverines 76-82 to win the national title.

In 2005, the Gulf Coast was ravaged by the devastating power of Hurricane Katrina. As well as destroying thousands of homes, businesses, and the lives of families, the Category 5 storm also uprooted the New Orleans Saints and New Orleans Hornets from their stadiums.

The Saints’ home, the Superdome, was extensively damaged, with the roof torn off and interior flooded. It was used as a temporary emergency shelter for more than 20,000 displaced residents in the immediate aftermath of the devastation.

The Saints were forced to find a new ‘home’ and their first home game of the season against the New York Giants had to be played at the Giant’s stadium. Three more of their home games were played in San Antonio and another four in Baton Rouge.

The New Orleans team finally celebrated their homecoming on September 25, 2006, with a magical night of ‘Monday Night Football’ at the repaired and renovated Superdome. In an emotional return, the packed out stadium watched as the Saints took the lead in the first 90 seconds of the game.

The home-field advantage indeed held true that night as the Saints went on to bag a victory against the Atlanta Falcons with a 23-3 win.

Knife Attack on the Tennis Court

Women’s tennis doesn’t always get the attention it deserves, but in 1994, it made headlines for all the wrong reasons. Yugoslavian-born Monica Seles was at the top of the women’s tennis world after beating her rival, Steffi Graf, to clinch the Australian Open.

In 1990, 16-year-old Seles had first beaten German Graf, making her the youngest champion of the French Open. Unfortunately, this sporting rivalry would almost cost Seles her life.

Seles was having a break during the second set of Citizen Cup’s quarterfinal match in Hamburg when the unthinkable happened. Gunter Parche attacked the 19-year-old, stabbing her in the back with a boning knife. Parche, an obsessed fan of Steffi Graf, said that he had wanted to injure Seles to help Graf reclaim her Number 1 title.

Almost as surprising as the attack was that Parche was only given a 2-year suspended sentence and walked away as a free man. This decision caused Seles to vow never to play in Germany ever again.

Seles (who became an American citizen in 1994), suffered a gash on her upper back, and the blade narrowly missed her spinal cord. Lucky to be alive, the sporting star made a full physical recovery in a matter of weeks but struggled for years with the psychological effects of the attack. Many believe this event caused the end of her promising tennis career.

Incidentally, the tournament for the Citizen Cup continued and Steffi Graf went on to play in the finals, beaten by Spain’s Arantxa Sánchez Vicario.

Stadium Roof Collapses Due to Snow

In 2010, the Minnesota Vikings were forced to host a home game “away from home” when the inflatable roof of their stadium collapsed under the weight of snow. The Vikings were due to play the New York Giants on December 12, but the game was postponed and moved to Detroit.

It wasn’t the first time that such a disaster had befallen that stadium. The 2010 incident was actually the fifth time that the roof had collapsed due to adverse weather conditions.

The first incident occurred in November 1982, just seven months after the Metrodome opened. An accumulation of snow caused the dome to deflate. The same thing happened the following winter and again in the spring of 1983. In 1986, high winds caused a slight tear. While it didn’t create a deflation, it did result in a nine-minute delay to the game.

A severe storm in December 2010 was the death knell of the tattered and torn roof. A Fox Sports News team was setting up their cameras the evening before and noticed water leaking from the sagging roof. Leaving their cameras on all night, they managed to catch the spectacular moment the roof gave way, sending snow and ice onto the field.

Such freak accidents can wreak havoc on your bets, especially if you like to bet on future events. Disasters aside, futures bets can be a highly lucrative market. Check out our guide to making the most of futures bets!