Combating the Disposition Effect for a Bigger Bankroll 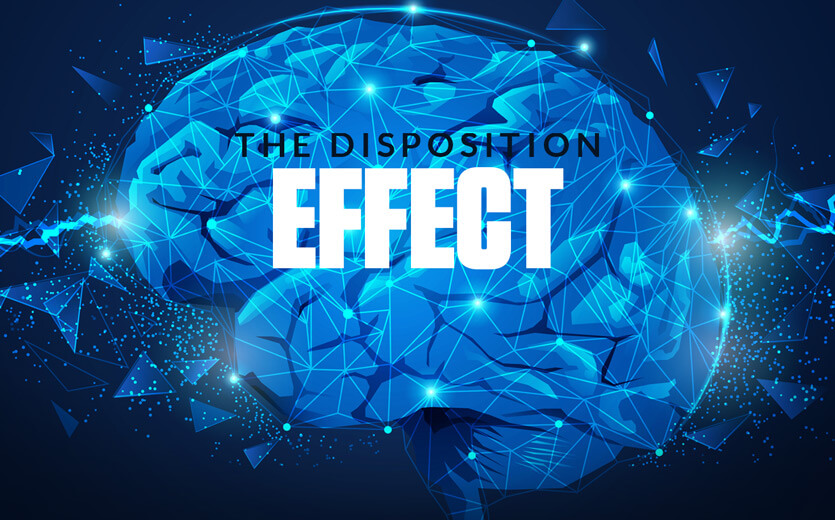 If you dislike losing significantly more than you like winning, you’re not alone: Doing everything possible to avoid losing is natural for just about everyone.

When we act upon feelings – and guided by our aversion to losing – we often find ourselves unwitting victims of the disposition effect. The disposition effect is a cognitive bias that affects everyone, from hedge fund managers to the sharpest sports bettors.

In this article, we’ll walk through what the disposition effect is, and why it’s critical to have this knowledge in your sports betting repertoire.

What Is the Disposition Effect?

The disposition effect, in the simplest terms, is our natural tendency to abandon winning strategies and action too early, as well as riding out losing strategies for too long.

The disposition effect is derived from prospect theory, which proposes that when someone is presented with two equivalent choices (one causing potential losses and the other causing potential gains), the person opts for the latter even if they ultimately produce the same result.

The tendency to devalue wins and overestimate losses is natural for all of us, which is why Hersh Shefrin and Meir Statman labeled this phenomenon the “disposition effect” in 1985. The word “disposition” is defined as a person’s inherent qualities of mind and character and was the perfect fit for this universal human phenomenon.

How Was the Disposition Effect Proven?

Like many of the cognitive errors we’ve covered in our betting psychology series, the disposition effect is drawn from the field of behavioral economics. This field is primarily concerned with analyzing and understanding irrational decision making.

In their 1985 study, Shefrin and Statman studied both equity market investors and property owners. They found that both groups were significantly more likely to sell a share or property that had gone up in value than one that had gone down in value. To prove their theory, they studied and documented large databases of investor trading activity, the real estate market, and the exercise of executive stock options.

Shefrin and Statman theorized that – in our decision making – we’re always hoping to break even by being right more often than wrong. As such, in every trade or sale, selling at a loss often means having to admit that we were wrong. By the same token, making a profit (no matter how small) proves to us that we were right.

Ultimately, this proves to be a thinking trap, as selling winners early and holding onto declining assets for too long tends to hurt us. Our hardwired tendency to avoid losses and lock in wins makes us act irrationally and engage in risky behavior, hence the disposition effect.

What’s an Example of the Disposition Effect?

The day comes when you need some cash, and you’re forced to decide which stock to sell. Research on the disposition effect suggests that most people are much more likely to sell the stock worth $120 than they are the $80 stock. In accordance with the disposition effect, people prefer to feel that they’ve picked a winner.

The correct decision in this scenario is to take the loss and ride out the winner. It’s good financial practice to stick with the more successful investment and cut your losses early. Statistically, it’s simply wishful thinking that the majority of losing investments will eventually rebound.

The Disposition Effect, Told Through Kahneman and Tversky’s Study

In the study, participants were presented with two different hypothetical situations. We’ll call them scenario A and Scenario B.

The implications of the study were clear: People are often willing to settle for reasonable gains, even if they had a good chance (reasonable risk) of gaining more. Most people will engage in risky behavior in scenarios when they’re trying to limit their losses. People weigh losses much more heavily against an equivalent amount in gains.

How Does the Disposition Effect Influence Sports Betting?

It isn’t hard to imagine how the disposition effect might affect our sports bets. Losses often cause stronger adverse reactions than the happiness and joy we receive from equivalent gains.

When most of us hit a long shot parlay, we’re usually ecstatic, but this doesn’t match feelings of loss we feel when we bet on a favorite and are beaten by a long shot underdog.

This tendency to fall for the disposition effect can cause us to make poorly-informed decisions, especially when it comes to sports betting.

The disposition effect can cause us to dispense with winning betting systems and sports betting strategies too soon. If we hit a middle, the disposition effect might make us believe that we should take our winnings and stick to a more basic strategy. This isn’t always a prudent move, as mastery of increasingly-complex sports betting methods is a necessary step for every aspiring sharp.

It Can Also Affect Your Analysis and Research

Before a new season begins, you might research a team who you think will improve. You believe that they’re severely undervalued by oddsmakers. If you then win a bunch of money by betting on this much-improved team, the disposition effect can cause you to think that you just got lucky and you should quit while you’re ahead. In reality, you should probably trust your research!

When Are We Most Vulnerable to Disposition Effect in Sports Betting?

The disposition effect usually affects us in three specific instances:

1. When We’re Working with a Large Bankroll

This can be explained by the law of diminishing marginal utility, a concept from the Principles of Economics. Essentially, the more money you have, the less you stand to gain from getting more money. Making or betting a lot of money makes us more likely to fall victim to the disposition effect because we’re even more likely to undervalue wins and overvalue losses.

2. When We Start out with a Big Bankroll but Are Down

3. When We Have to Admit Our Mistakes to Others

If you’re mired in a particularly tough stretch of your sports bets, admitting it to your friends or family makes you particularly vulnerable to the disposition effect. Being accountable to others makes our desire to avoid admitting we were wrong even stronger.

How Can We Combat This Psychology When We Bet?

When you’re faced with a choice between thinking about one large gain or numerous small gains, always choose the latter. For example, maximize feelings of positive utility by thinking of one night of winnings as five $20 wins, rather than a single $100 win.

Conversely, when you can view a situation as one large loss or several small losses, choose the former. This would mean that you should think of one bad night at your sportsbook as one $100 loss, instead of five different $20 losses. This creates a smaller amount of negative utility and, as a general rule of thumb, you’ll feel less of a sense of loss.

Ultimately, the best way to combat the disposition effect (and all other cognitive biases), is to have a rules-based betting system that removes emotion and irrationality from your decision-making process. Experience and education are integral to being a successful sports bettor.

Thankfully, we’re here to help and have you covered no matter what stage you’re at in your betting journey—be it first learning to manage your bankroll or arbitrage betting.