Middling Strategies: How to Bet on the Middle for Sports 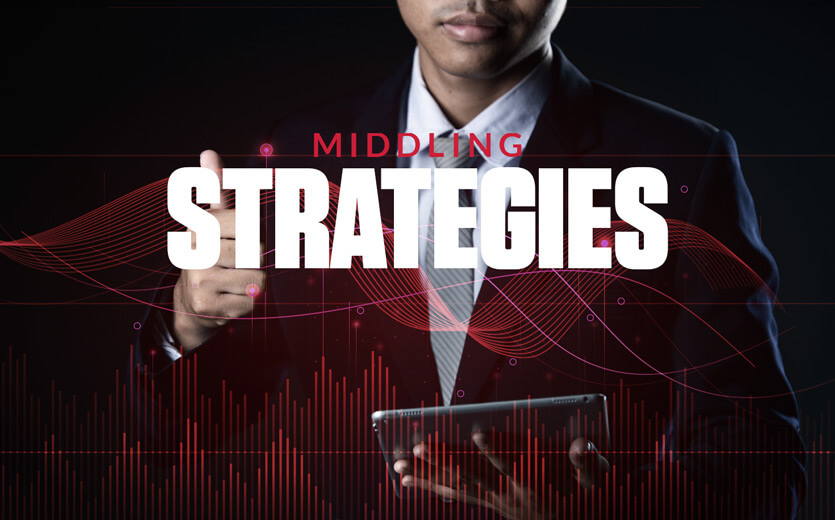 Betting on “the middle” is hard to do. However, when it works, it’s one of the most profitable bets in all of sports betting.  Many of the biggest payouts in sports betting history have occurred when bettors successfully hit the middle.

So, how exactly do you do take advantage of this strategy?

In this article, we explain what middling can do for your sports strategy and  your bankroll.

What Exactly Is “The Middle”?

Middling is a betting strategy that exploits a shifting point spread line, or a moving totals line. A middle occurs when you place two opposing bets on the same event. In this sense, middling is a hedging strategy, but the goal isn’t reducing your exposure. Thanks to the line moving between the time of your first and second bets, middling gives you an opportunity to win both of them.

For a middle to be executed successfully, bets need to be staked on two different opposing lines (or totals) in a way that the final score will land between both numbers, or “the middle”.  As such, both wagers will win.

In order to understand middling, you’ll first have to get a solid grasp on point spreads, in addition to learning how totals betting works.

There Are Four Different Middling Scenarios: 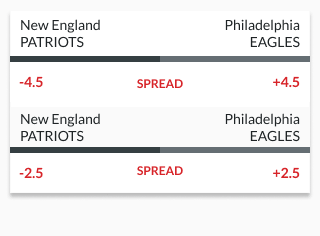 There’s an opportunity to hit the middle any time a point spread moves. If a point spread opens at +4.5 / -4.5 – and moves to +2.5 / -2.5 the day after, there’s an opportunity for a middle. If you bet on the Eagles at +4.5 when the initial line is released and take the Patriots at -2.5 after it shifts, there’s a chance you can win both bets. If you do, you’ll hit the middle, and receive a big-time profit.

There’s an opportunity to hit the middle any time a point spread moves.

To hit a totals middle, the under must be higher than the over for one of your two bets.

For example, if the line opened at 44.5, and then moved to 39.5, there would be an opportunity for a middle. You would have to take the under at 44.5, and then you could take the over at 39.5. If the game in question finished with anything higher than 39 points, you’ll have succeeded!

To hit a totals middle, the under must be higher than the over for one of your two bets.

Conversely, if the line opened at 39.5 and moved up to 44.5, there would be another opportunity for a middle. You’d have to take the over at 39.5, and the under at 44.5. If the game ended with point totals of more than 40 points, you’d successfully hit the middle.

Is Betting on the Middle Common?

Middling opportunities are more common than you might think. In college football, it’s common to see lines totals shift by at least three points from their initial opening to the time the game starts. The point spread for college football games can shift up to 7 points, in many cases.

Shifts in the spread and totals are not as substantial or frequent as NFL and NBA games. This is because these games receive a ton of betting volume and are carefully scrutinized by bookmakers. Remember: Just because a swing (in either the point spread or the total) may be less frequent on NFL or NBA lines, it doesn’t mean it never happens.

Why Is Middling Such a Great Opportunity?

The best part of middling is that it’s a low-risk venture. Because you’re taking both sides of a point spread (or totals bet), it’s guaranteed that one of them will be successful. If you don’t hit the middle, you’ll simply lose the “vig” to your sportsbook.

However, keep in mind that just because the middle is available, it doesn’t mean that it’s the likely result.

Say you made 21 bets on both sides of a wager in an effort to hit the middle, all at -110 odds. In this scenario, you’d only need to hit the middle one time to secure a profit. You’d have to win 1 out of 21 bets.

Translated into a percentage, this means you’ll need to “middle” 4.8% of the time to avoid losing money. This is certainly feasible. However, trying to “middle” isn’t foolproof: Be aware of the risks associated with middling before you start betting. If you aren’t able to hit the middle more than 4.8% of the time, your bankroll is going to take a hit.

One of the most famous incidents of middling was during Super Bowl XIII in 1979. The Cowboys faced off against the Pittsburgh Steelers, who were initially set as the favorite. The spread opened at -3.5 for Pittsburgh, and +3.5 for Dallas.

In response to a high volume of bets on Pittsburgh when the line was first released, oddsmakers shifted the line to +4.5 for Dallas, in order to encourage betting action on the other side. However, by kickoff, the majority of bets had been placed on Dallas.

The final score of the game ended at 35-31 for Pittsburgh. As such, those who bet on Pittsburgh at -3.5, and then the Cowboys at +4.5, won both of their bets. Although it’s (relatively) uncommon for NFL games to be decided by a 4 point margin, it famously happened in 1979.

To this day, bookmakers refer to Super Bowl XIII as “Black Sunday.” Bettors won out huge, and the bookies suffered.

How You Can Hit the Middle with Live Betting

Live betting has surged in popularity in recent years. Not only has this provided a great way for bettors to hedge their bets, but it also provides more opportunities to hit the middle.

Say you’ve bet on the Patriots to beat the Eagles by 4 or more points (-4). After the first quarter, the Patriots are up by 14 points. The line might shift to +7 for the Eagles, as their chances of covering the spread are much smaller with such a sizeable deficit. With three quarters left, it’s not likely that they’ll come back and cover the spread, but it isn’t impossible.

If you bet on the Eagles at +7 after the first Quarter and had bet on the Patriots before the game started at -4, you’d have an excellent opportunity to middle. If the Eagles were able to mount a comeback and the Game finished 26-20 for the Patriots, you’d hit the middle.

We don’t advocate trying to hit the middle unless you’re comfortable with the ins and outs of sports betting. Not only does hitting the middle require intense knowledge about sports (and many different sports betting strategies), but it also necessitates a substantial time investment.

To hit the middle, you’ve got the check sports betting lines frequently. Middles are possible only by checking the lines at same sportsbook you placed your initial wager with, however, your chances of success are higher if you line shop across multiple sportsbooks.

You’ve got to be confident that the line will move in a way that’s conducive to middling. When you see the opening line, you’ve got to act quickly.

We don’t recommend middling to green sports bettors. Wrap your head around a few sports betting strategies first, and then try your hand at hitting the middle.