Outcome Biases: How to Evaluate Your Betting Process (and Results) 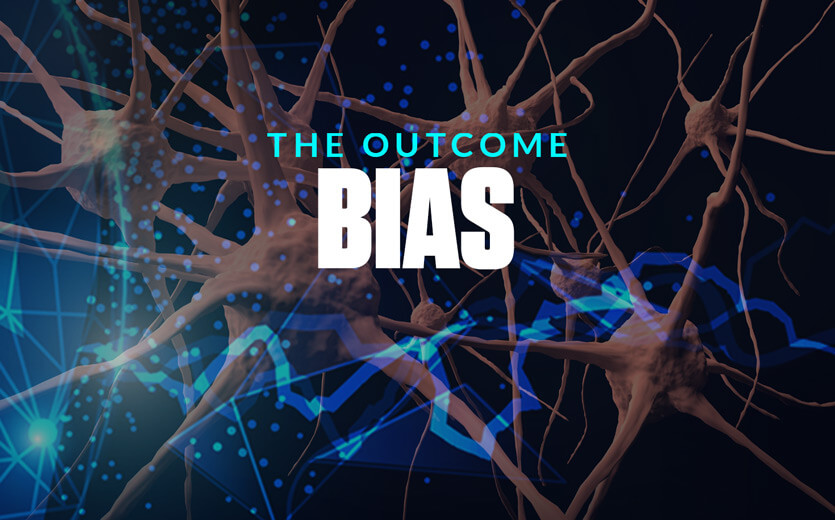 We’ve all had that one friend who insists that he’s just never going to run out of gas. Even though the gas light is blinking and the car is sputtering, he always seems to make it to the gas station just in time. He always insists that – because he hasn’t run out of gas yet – it’ll never happen.

Just because he hasn’t run out of gas yet doesn’t mean that driving around with a dangerously low tank of gas is a smart decision (or that he won’t run out of gas in the future). Most people might not know it, but this friend is a victim of the outcome bias.

The outcome bias also affects many sports bettors, and when unaddressed, is detrimental to a bettor’s bankroll. In this article, we detail exactly what the outcome bias is, what its origins are, and how to translate this knowledge into more successful sports betting!

What Is the Outcome Bias, Exactly?

When evaluating a decision, it’s often important to judge the process we used just as much as the results themselves.

However, when we already know the result of a decision, our evaluation of the decision-making process can be skewed. That’s where the outcome bias comes into play.

If we know the result of a decision we made (regardless if it was a positive outcome or a negative outcome), we tend to emphasize the wrong factors in the decision-making process, instead of other – more relevant – factors that led to the decision.

When we fall victim to the outcome bias, we start to make irrational, bad decisions in the future.

Say that someone falls on hard times, and doesn’t have enough money to cover this rent for a month. They take their remaining $100 and head to a bodega to purchase a $100 worth of lottery tickets. Miraculously, they find out they’ve won $100,000. Their financial problems are solved in an instant. 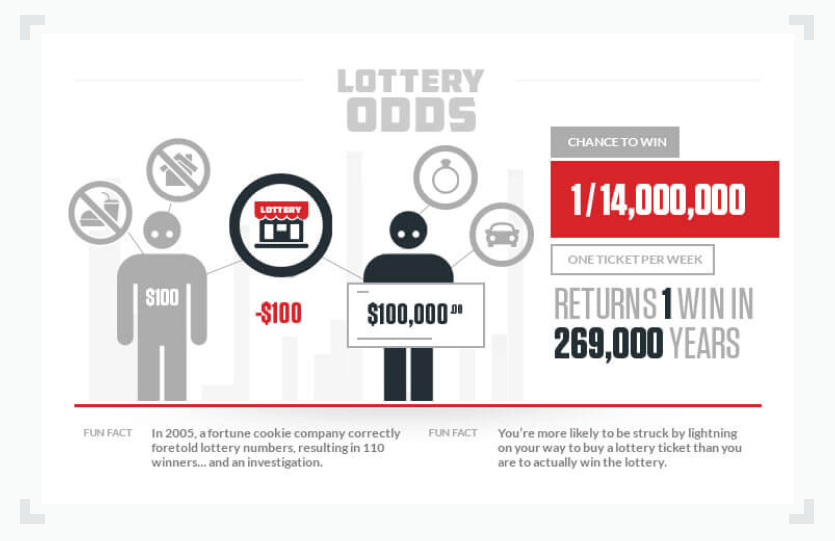 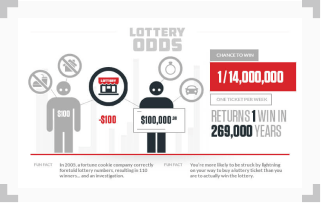 Some might think that this person either made a wise decision to bet their net worth on winning the lottery or was destined to win based on luck alone. This is a classic response to the outcome bias: It worked out in the end, but if they’d lost all their money, they’d likely be deemed wildly irresponsible.

Don’t believe me? The odds of winning the lottery are 1 in 14 million, meaning that someone who purchases one lottery a week can expect to win once every 269,000 years.

Saying that they did the right thing in this scenario would be to evaluate his decision-making process by the successful outcome, and not the process that led to the outcome.

Why Is this Bias Important?

Placing too much importance on an outcome – and not critically examining the other relevant factors – really clouds our thinking.

Ultimately, a way of thinking that emphasizes the outcome alone – and not the process that led to the outcome – can make us act in irrational ways. Of course, that’s the last thing we want in our sports bets.

The outcome bias is related to the hindsight bias, but it isn’t the same.

Hindsight bias refers explicitly to when our memory of past events is distorted, or when we say that we “knew it all along.”

Outcome bias means that we focus on weighing the outcome much more heavily than all other relevant pieces of information when determining whether the decision leading to the outcome was correct.

How Was the Outcome Bias Proven?

Psychologists Baron and Hershey gathered test subjects and presented them with a hypothetical scenario.

The scenario involved a surgeon, who had to decide whether or not to perform a high-risk surgery on a patient. The probability of a successful outcome (the patient lived) or a negative one (the patient died) was well-known.

Subjects were given the outcome of the surgery (life or death) and then asked to rate the surgeon’s decision to perform the surgery.

The majority of subjects didn’t grade the surgeon’s decision independently of the outcome. They were victim to the outcome bias.

Why Do We Fall for the Outcome Bias?

Like many other cognitive biases we’ve discussed in our betting psychology series, we fall for the outcome bias due to basic human instinct.

It’s natural that we evaluate nearly every decision we make. Most of us look back at past actions and measure future decisions against those successes and failures.

Our reluctance to critically examine bad decisions which lead to positive outcomes is what makes us susceptible to the outcome bias.

Classic Examples of the Outcome Bias

The outcome bias is tricky to get a grasp on. We’ll provide you with a few more examples of it at work below.

How Does This Affect Our Sports Bets?

We have to be careful to evaluate our decision-making process when it comes to our sports bets, not just the outcome of the bets themselves. Being able to honestly assess our skills and strategies is crucial to long-term success. Getting good outcomes on luck alone is a poor recipe for growing your bankroll in the long run.

Let’s use an example. 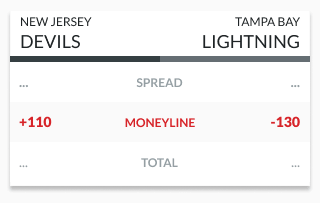 Using our guide to calculating implied probability we’d know that bookmakers have assigned New Jersey a 47.6% chance of winning the game.

However, heading into the game, a bettor learns that Tampa is starting their backup goaltender, and their star player has the flu and won’t be playing. Bookmakers are slow, and they haven’t adjusted their lines to reflect this new information. So, the bettor decides to place a moneyline bet on New Jersey, thinking that they have a much higher chance of winning than what the line reflects.

However, New Jersey loses the game 4-2 anyways. The bettor loses all his money.

When this bettor places his next bet, should he follow the same line of thinking? Absolutely! Otherwise, he’d be falling for the outcome bias.

All sports betting is based on trying to find an edge in probability. Even though the bettor lost, the process was still sound. He found an edge over his sportsbook, and correctly identified value in the line. He just wasn’t rewarded with a favorable outcome. Any sharp would say that this bettor did the right thing.

The Effects of Chance, Variance, and Probability

Every sports bettor has to deal with chance, variance, and probability, and we can never know with certainty whether our bet is going to be successful or not.

The key is to always look for value, and bettors should always do their best to judge sports bets based on the information that was available when they made their bet – and always look beyond whether their bet was graded a winner or a loser. The outcome doesn’t matter as much as the process.

A great way we recommend to honestly evaluating sports betting strategies and ensure we never fall victim to the outcome bias is to keep a record of all sports bets.

Questions To Ask When You’re Reviewing Your Sports Bets

If bettors ask themselves the following questions – and answer them honestly – they’ll be well on their way to becoming sharper bettors: 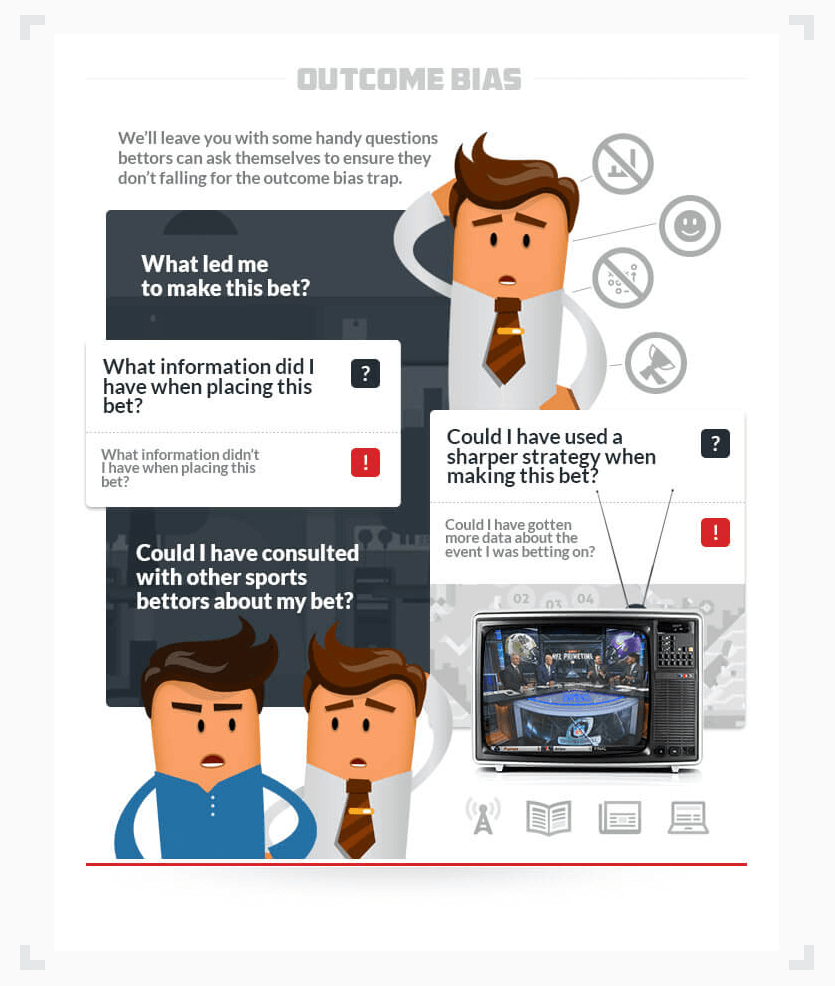 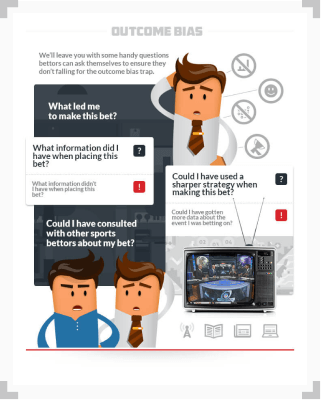 For more on the cognitive biases that hurt sports bettor’s winning percentages, check out our betting psychology series.