Everything You Need to Know About Hindsight Bias and Sports Betting 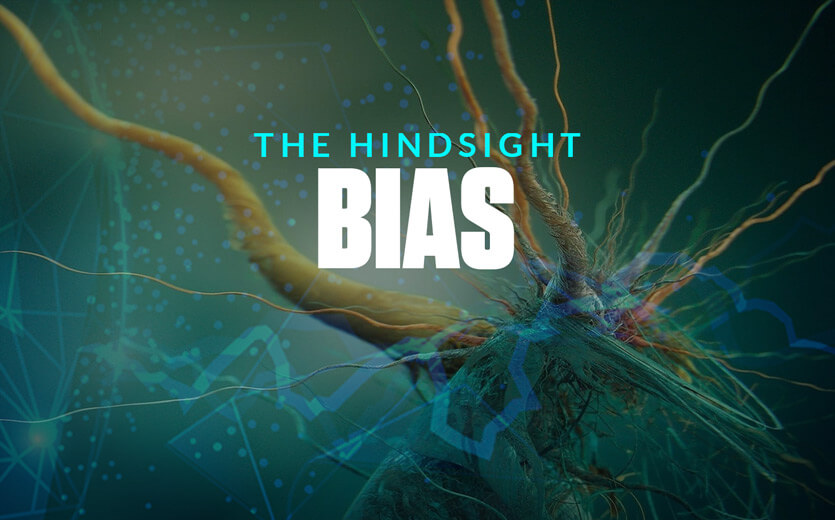 As part of our Betting Psychology series, we explore “hindsight bias,” which is also referred to as the “known-it-all-along” bias. This is one of the most extensively-studied and most common cognitive biases in psychology. It applies to everything from sports betting to medical diagnoses to campaign strategy!

We take you through the definition, why it’s important, its proven connection to sports betting, and how sports bettors can translate knowledge of this cognitive bias into a higher winning percentage. Read on to start betting like a “sharp,” and understand the cognitive biases that affect your decision-making process.

What Does Hindsight Bias Mean?

Hindsight bias is when people look back at events past and believe they were more predictable than they really were as they took place.

You’ve definitely heard someone bragging about a successful decision, prediction, or sports bet after the fact. We call these people “Monday morning quarterbacks.” In fact, we use this informal nickname to describe a heavily-researched psychological phenomenon that affects our making: hindsight bias.

The danger of the hindsight bias is that it often leads people to think that events are more predictable and likely than they actually are, causing them to oversimplify the causes of an event.

We didn’t actually know it all along like we thought we did. We feel like we knew it all along, but after the fact.

The Different Kinds of Hindsight Bias

It’s important to note that there is some nuance to hindsight bias. Psychologists Roese and Vohs have proposed three different levels of hindsight bias: 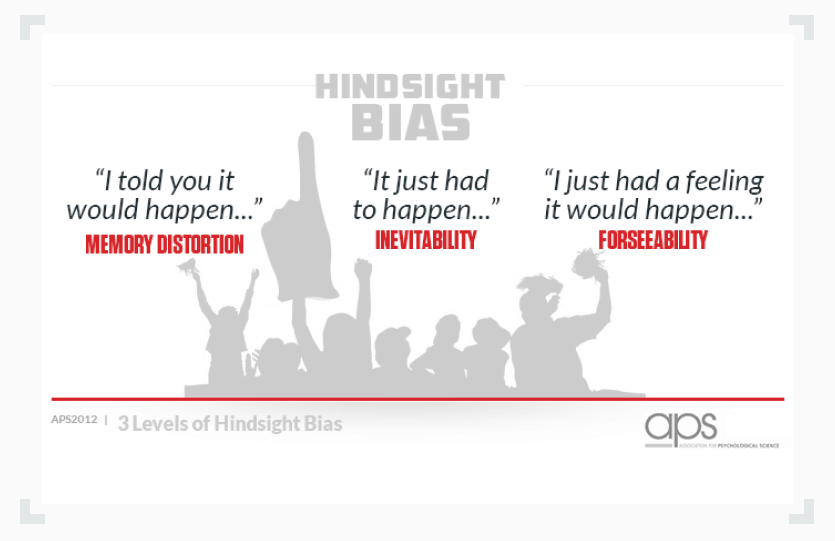 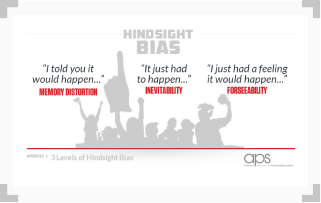 The Origins of Hindsight Bias

In 1972, Daniel Kahneman and Amos Tversky, a social psychologist and behavioral economist respectively, discovered these flaws in human decision-making that made people act irrationally. In short, they debunked the notion that human beings made decisions based on a rational assessment of available facts and their stated goal. Instead, they discovered that people routinely made errors based on poor judgment that was out of their control.

The most famous study on hindsight bias took place in 1991. In the study, students attending Calvin College were tasked with predicting how the U.S. Senate would vote on Supreme Court Nominee Clarence Thomas. 58% of the students correctly predicted that he would be appointed. However, a week after Thomas was confirmed on the Supreme Court, the students were asked to remember if they had previously predicted Thomas’ appointment.

A whopping 78% of students responded that they had predicted his nomination correctly! That’s over 20% of respondents reformulating their prediction with the benefit of hindsight. Brink and Bolt produced incontrovertible evidence of hindsight bias in their landmark study.

How Does Hindsight Bias Apply to Sports Betting?

Thomas Gilovich, a Stanford psychology professor, wanted to understand why so many sports bettors stuck to losing strategies in their sports bets. He came away with a simple answer: hindsight bias.

By examining how bettors perceived a soccer game that was won by a total fluke (i.e. an obviously bad call by a referee that impacted the final result), he found that both winners and losers wouldn’t have changed their bets. Winners would attribute the result to their brilliant foresight, while losers would blame the bad result. With the benefit of hindsight, neither group considered their bets incorrect.

Hindsight bias clouded both the winners and losers to analyze their strategy clearly and rationally. Successful bettors were quick to believe that their bets were successful because their process in predicting the outcome was sound. They rarely attributed their success to luck. On the other hand, losing bettors were eager to blame bad luck, but they rarely questioned their betting processes and strategies.

In a second experiment, Gilovich sought to determine whether the results of past bets (decided by fluke) had any impact on future bets.

He gathered the same group of bettors and asked them to bet on an upcoming soccer match. Before placing their bets, Gilovich reminded the participants about the results of the soccer match that they had initially bet on.

He found that, when he reminded winners of their lucky result (and losers of their unlucky results), it reaffirmed their betting strategy. Winners stuck to the same strategy, and losers, too, believing that they had just gotten unlucky before.

Gilovich helped to prove that hindsight bias can absolutely have an effect on future bets, as well as how we view our past bets. Hindsight bias can often cause bettors to become overconfident in flawed betting strategies, either by attributing losses to simple bad luck or by not attributing wins to good luck.

Just like any other group of people, hindsight bias makes bettors reluctant to admit that they were wrong.

Why Does Hindsight Bias Matter?

Hindsight bias matters because it clouds our judgment. When we aren’t aware of what holds us back, it causes a whole host of problems in our decision-making processes.

Someone prone to hindsight bias can have a false sense of superiority. They may believe that they’re more intelligent than they really are. Being overconfident can lead to making unsound and ill-informed decisions which can have disastrous consequences. A risky move based on a poorly-founded sense of confidence can wipe out your bankroll fast.

How to Integrate the Hindsight Bias Into Your Bets

When laying wagers, successful sports bettors have clarity in their decision-making process. They place equal weight on lucky wins and unlucky losses because they understand that, in sports betting, luck can quickly swing both ways. Cognitive biases push us off a clear, rational path, so we need to develop a successful, consistent system for betting.

The first step is to know what it is, and how it can cloud your judgment. Be honest with yourself about why you may have won or lost a bet. Be as objective as possible, and remove as much subjectivity from the process of evaluating your bets as you can.

Here are some helpful tips on how to get there:

To get started, you can either check out beginners guide to sports betting or our detailed explanations of the sharpest betting strategies.